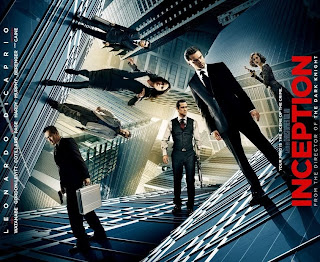 I have heard much talk that Inception, the newest film from writer/director Christopher Nolan, is suppose to be extremely difficult and confusing. I did not find it so. On the contrary: I found it remarkably logical and intelligent if you are willing to go along with its premise. Once you accept the world of Inception fully, everything works remarkably well to create one of the most original, inventive, and amazingly intelligent films of the year.

Dom Cobb (Leonardo DiCaprio, whose character's name to me sounds oddly like 'dot com') is a master thief of the most unique order: he breaks into people's minds to steal whatever his employer has requested he steal. He is aided by Arthur (Joseph Gordon-Levitt), and their latest heist involves Saito (Ken Watanabe) a Japanese industrialist. Saito, however, is playing a game of his own, and after seeing what they can do hires them, not for extraction (removing ideas from a subject) but for inception (planting a thought into the subject).

The victim is Robert Fischer (Cillian Murphy), Saito's rival. He wants Fischer to have the thought to break up his father's company so to allow Saito to have dominance over his industry. Inceptions are suppose to be impossible, but Cobb knows it can be done. This will require one to go into the deepest level of the human subconscious, which can be dangerous. However, they agree to do so, in exchange for Saito to fix criminal charges against Cobb that forced him to flee to France (if only Roman Polanski could hire these guys).

Cobb fled due to the mystery surrounding the death of his wife Mal (Marion Cotillard). He is desperate to return to his children, but doing so would land him in prison. He goes to his father (Michael Caine), a professor in Paris, to help him find an "architect": someone who can design the false world the subject will inhabit while the group goes in. He selects Ariadne (Ellen Page), one of his students.

Cobb also hires Yusuf (Dileep Rao) and Eames (Tom Hardy), the former to induce a particularly strong hibernation and the latter as a "forger", one who can take the appearance of someone in the subject's subconscious to get him to trust him. The group sets up the plan and begins executing it, but Cobb's obsession with Mal starts interfering with the project, as does the private army already in Fischer's mind to protect him from "extractors". The thieves, who occupy three (or four) levels of subconscious thought, have less and less time to leave their worlds or they will end up in Limbo, where if the physically live their minds will now be gone. These dream-inside-a-dream-within-a-dream all start folding into each other.

In a nutshell, that's as close to a description of the overall story of Inception one can give without starting to give everything away. However, even a cursory view of the plot doesn't make the concept so difficult to understand or confusing. Nolan actually does something few film-makers do: he trusts his audience to understand and to keep up with Inception.

Once he sets up the premise, he doesn't go back to try to explain things or dumb things down or try throwing in things that wouldn't make sense within those dreamworlds. He (and we) understand that dreamworlds have their own internal logic, which doesn't correspond to the logic of reality itself. Nolan emphasizes this with the "totem": an object that each extractor carries with him (with the exception of Ariadne, it's an all-male team) that assures him that they are now in reality. He also gives us the concept of the "kick": the falling sensation that wakes us up (which everyone I imagine has experienced) is used by the thieves to wake from the dreams of others.

Not only can you tell Inception is an intelligent film because it follows its own internal logic but also by the names and occupations the characters have. Ariadne, for example, is the name of the princess who helped Theseus maneuver The Labyrinth against the Minotaur, and here a similarly-named girl helps Cobb maneuver the labyrinth of Fischer's mind against Mal.

The more I ponder Inception, the more I like it. It has all the right elements of a heist film (the team planning and executing a near-perfect break-in/out), throws in a bit of The Matrix (the conflict between reality and illusion), and even shades of The Fountain or Shutter Island (guilt about death/loss intruding into reality--although Shutter Island is still lousy). This is what makes me love the film: Nolan thinks I'm smart and that all the various plots within Inception will not go over my head. He places that trust on us and let's us come to our own conclusions.

He also gives all the actors a wonderful platform to show us their abilities. DiCaprio has now perfected the tortured individual (see The Departed, Shutter Island, Inception).

Side note: oh, how I wish he and/or Christian Bale would do a romantic comedy, merely to keep them sane and let us see a jolly side as opposed to their brooding, morose, humorless ones. Perhaps it should be required that after working with Christopher Nolan, you should make a film with Judd Apatow.

He never lets up as someone who is professional at his job but who is on the verge of crumbling internally and externally because of the torments within his own mind.

Page has left her Juno persona and given us a character intrigued and repelled by all that goes on around her. The conflict between the ability to be able to do anything within the mind and the fear that can overwhelm is played beautifully.

Likewise, Gordon-Levitt has left all traces of 3rd Rock from The Sun (and now has better hair) as the thoroughly professional Arthur. It is so wonderful to see him grow and grow as an actor--going from lovelorn in 500 Days of Summer to cold and methodical in Inception.

Hardy brings what little humor there is to the traditional team of criminals (one of the few flaws in Inception is how no one really seems to even try to have a good time, or smile, or laugh). Murphy is in rare form: as almost an innocent within this maze of madness, someone who is trusting of what he sees and is told is deceived throughout, tortured physically and emotionally.

Cotillard I think was the only one who veered close to overacting, but given that Mal was a little crazy I'm willing to not dwell too much on it. Given how the musical cue to get ready to jump into reality was Edith Piaf's Non, Je Ne Regrette Rien, I wonder if this was Nolan tipping his hat to Cotillard's Oscar-winning performance in La Vie En Rose.  It can't just be mere coincidence. 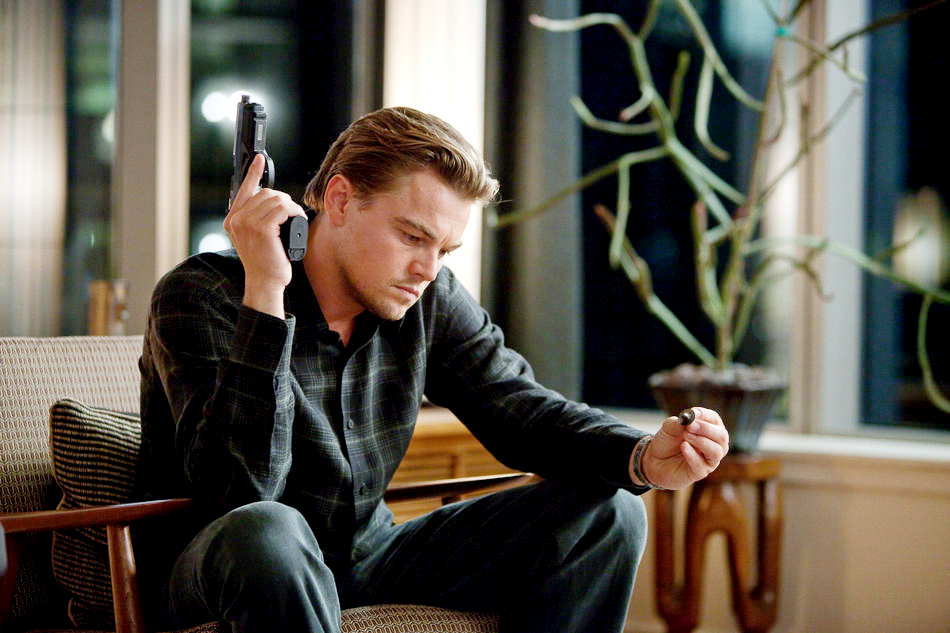 I grant that both the concept of unrealities and the visuals (particularly a thrilling fight in a hotel hallway where it appears they are swimming in mid-air) are reminiscent of The Matrix, but that shouldn't be held against it because both are uniquely original ideas. Another great plus is that as in The Matrix, the special effects (such as the aforementioned floating and fighting down the hotel hallway or when they first enter Saito's mind). That actually makes it a rarity: a film where the visual serve the story as opposed to merely showing what can be done.

There are a few things to complain about. Chief among them is Hans Zimmer's score. It isn't that it's a terrible score (overall, I thought it worked within the dark atmosphere of Inception). It's that there was simply too much of it. There were very few moments of silence within the film and I think it would have benefitted it if the music didn't draw so much attention to itself.

I predict the music is going to polarize people the same way the score for There Will Be Blood did: either you loved it or you hated it (I'm in the 'love' quarter). I also am not, at the moment, too thrilled with the ending. The audience I was with wasn't keen on it either: I heard a few groans when the movie went to black. I have to say at the moment because I think the nature of it is the ultimate trust with Nolan: take it however you want to take it, he seems to be saying. I'm not going to wrap things neatly up for you. you have to make your own decision.

It's not to say that I don't understand the frustrations of viewers who would like a definitive answer.  I just think it's all right if we don't have one.

Nolan has achieved a great film: one that is intelligent and entertaining. He appears to validate my view that if you trust your audience, you can create an extraordinary film that will make you think and get you involved. After going through Eclipse, Grown Ups, The A-Team, Prince of Persia: The Sands of Time, Robin Hood, Sex & The City 2, or Clash of the Titans, I wouldn't blame people for despairing that good film-making had vanished from the earth.

Inception is more like a Restoration: a film where the mind is engaged and that appeals to a broad audience. To sleep, perchance to dream...