Prince of Persia: The Sands of Time. A Review (Review #90)

PRINCE OF PERSIA: THE SANDS OF TIME

Let's get some things straight: 1.) the correct pronunciation is E-rawn or E-ran, not I-ran. 2.) Persians are NOT Arabs. Ask any Persian/Iranian and they will be quick to point out they may have an Islamic faith system, but they are not of the same stock as their neighbors to the West (Iraqi, Jordanian, Syrian for example).

Such details are completely unimportant to the creative team behind Prince of Persia: The Sands of Time. After all, what we get is this vaguely-Arabian Nights feel that takes elements from other films such as Aladdin and The Thief of Bagdad and blends them into a hoped-for franchise.

Dastan (Jake Gyllenhaal) is a street urchin who catches the eye of King Sharaman (Rodney Pickup) after seeing him stand up against his guards. The King adopts Dastan and raises him among his other sons, Tus (Richard Coyle) and Garsiv (Toby Kebbell). Fifteen years later, Tus, Garsiv, Dastan, and their uncle Nisam (Sir Ben Kingsley) have learned that there are weapons of mass destruction (in the form of super-sabers) in the holy city of Alamut and they decide to attack it before these WMDs fall into their enemies hands. Once the city is taken, they discover there are no WMDs (excuse me, no munition factories), but there is a temple ruled over by the beautiful Princess Tamina (Gemma Arterton), or as I lovingly called her, Princess Tam-Tam.

She tries to get a Sacred Dagger smuggled out of the city but Dastan captures it not knowing its true importance. When the King arrives, he is assassinated via a poisoned robe (not unlike that Greek myth of Medea), a robe Dastan had given the King. Now suspected as the assassin, Dastan takes flight, with Tam-Tam joining him so as to stay close to the dagger.

We all discover that this is no mere dagger...it is a dagger that allows the holder to go back in time. However, it is the sands within the dagger that allow the holder to change the future, but that sand has run out and they must travel to find more of it, all while avoiding capture by Sheik Amar (Alfred Molina),who runs an illegal gambling empire, and the royal family and the Hassassins that have been hired to stop them at all costs. 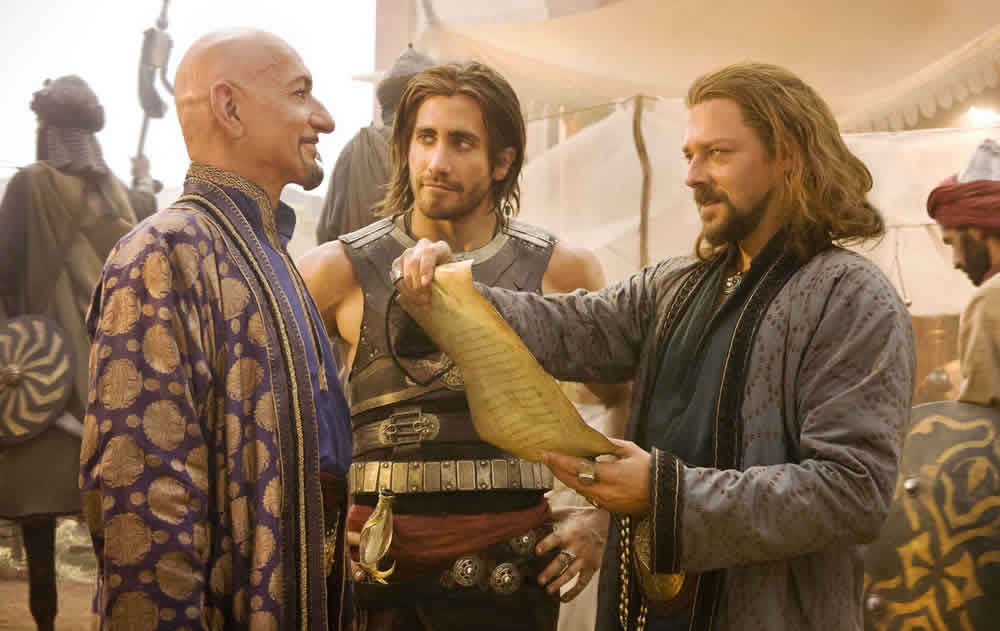 I suppose it's my fault for not knowing the history of Prince of Persia. I was completely unaware that the film was based on a video game (the last one I've attempted to play was Halo, the end results being my banishment from ever playing it with my twenty-something friends).

I'm told that the device of the dagger to go back and change things is part of the game, and in that format it works. In terms of a film, this is the worst kind of deus ex machina: any time the characters are in a particular kind of danger for which they cannot engineer an escape all that has to be done is literally 'push the button' and their problems are solved. The script by Boaz Yakin, Doug Miro, and Carlo Bernard (with screen story by video game creator Jordan Mechner) takes this device to use three times, but they failed to understand that what works in the gaming world doesn't work in the cinematic world.

There is no real suspense in the predicaments of Dastan and Tam-Tam since we know they can get out of it with the greatest of ease. Worse is that the trio's script has the characters themselves tell us what we have either already seen or already know. After Dastan discovers the dagger's powers (and uses it twice in the same scene) he tells Tamina what he discovers, which is odd given that A.) she already knows this and B.) we already know this.

The tone and dialogue in Prince of Persia is so grandiose and self-important that it because at times laughable.

It may be that director Mike Newell didn't trust us to keep up and we had to be told plot points and exposition passed as dialogue. He might not have even trusted us to get the symbolism of an army invading a world that had not attacked them to stop alleged weapons from getting in the wrong hands but in really going after something of greater worth.

I have no conclusive proof that there was any attempt to suggest real-life events, but if it did, it only draws away from the fun that it was aiming for if a video-game film is trying to say something more.

This is tolerable, but what is just flat-out bizarre is all the British accents in Persia. Gyllenhaal in particular speaks with this faux-British tones that only draw more attention to the fact that he is in fact American. This is only part of the problem in his performance: there are moments when Gyllenhaal appears genuinely flustered and confused. Instead of a sure young man of action, we get a guy who just seems to stumble from one situation to another with no forethought into either how he got in or how to get out. I could not distinguish between either of Dastan's royal brethren, and the fact that they were so interchangeable leads one to conclude that they were really unnecessary to the overall plot.

As for Sir Ben Kingsley, it's hard to think he was taking any of this seriously so one shouldn't be too harsh on him. 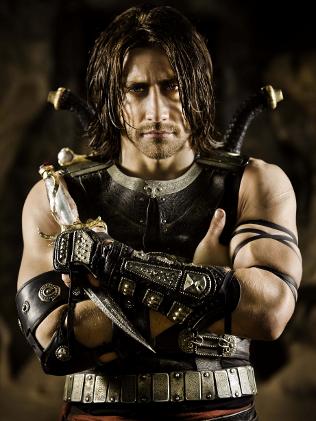 The special effects were nothing extraordinary or amazing. In fact, they were almost creepy--Gyllenhaal looks frightening when he suspends time, and the Hassassins sent to go after Dastan and Tam-Tam were like the Princes or Sheik Amar's crew: indistinguishable.

Side note: I wonder why in the Hassassins' temple there is a Whirling Dervish dressed all in black since from what I understand the Dervish is from the Sufi branch of Islam which is a more mystical and contemplative form of the Muslim religion. The idea of a peaceful mystic performing an intimate act of prayer within the halls of a temple to quasi-Satanic killers is just odd, but I suppose the mishmash of Middle-Eastern/Persian/Islamic cultures is par for the course in a film like Prince of Persia.

Harry Gregson-Williams' score was vaguely-Arabic in sound, but it was a constant presence throughout the film, doing what a musical score is not suppose to do: draw attention to itself.

There were so many elements that Prince of Persia had were silly: I sat there thinking, 'Really? An ostrich race?' 'Really? Girls serving drinks at said ostrich race looking like Vegas waitresses?' The ending was really what killed the film: Dastan stabs himself in front of the new King Tus and then Tus hits the button to find he can quite literally turn the sands of time back, thus bringing our hero (and star for any sequel) back to life. Not that it does Tus any good to know what is going on.

As it stands, after finally entering the temple (which I guess would be the final level), what we get is the Ultimate Deus Ex Machina (ie. a cop-out), where we go almost back to the very beginning. That kind of plot device is so abhorrent--it means that basically everything is resolved and all the characters long dead are now magically back to life. We all could ask basically then what was the point of going through all this if we're just going to have everything taken care of as if nothing had happened (and in a sense, it never has), but if there is to be a sequel (and the title, complete with colon, implies there is), why invest any interest in the characters if the dagger will solve all their problems?

One last note.  If having non-Arabs/Persians play Arabs/Persians is offensive, while I am on your side, I'm sure better ethnically incorrect castings can be found.  However, having Jake Gyllenhaal play a Persian will or should rank up there among the worst miscastings, alongside Charlton Heston's Mexican and Mickey Rooney's Japanese turns.

I hope Jake Gyllenhaal had fun showing off his new physique and that he can play something other than a tortured individual (see examples: Brokeback Mountain, Brothers). He I'm sure had fun preparing for the role by playing video games. As it stands, though not very exciting or funny or interesting, I'd rather this Prince of Persia be A bomb than have the current Prince of Persia have THE bomb.