I come from a unique perspective when it comes to MacGruber. I haven't seen either the MacGruber skits on Saturday Night Live or a single episode of MacGyver, the show they spoof. I do know about them though. On MacGyver, the title character was always able to get out of situations by making weapons out of whatever was handy. This "making an explosive out of two strings and two AA batteries" is what MacGruber mocks.

The difference is that while MacGyver himself was always successful, MacGruber was always failing and thus, everyone would end up dead. I suppose this works when the MacGruber bits are about a minute long, but now we have to go for 90 minutes, and you have fill in that time with things like story and characters. However, the script by Jorma Taccone, John Solomon and Will Forte, fail to expand the character and end up creating a horrible film and an unfunny one to boot.

I figure this is the plot: Dieter Von Cunth (Val Kilmer) has stolen a nuclear warhead.  Let me stop right here to point out that 'Dieter Von Cunth' is to those involved in MacGruber the height of hilarity. Maybe to a twelve-year-old.

The Pentagon, under Colonel James Faith (Powers Boothe) and his protege Lieutenant Dixon Piper (Ryan Phillipe) now come to MacGruber (Forte) to stop him. MacGruber has his own score to settle with Von Cunth--he is responsible for killing his wife Casey (Maya Rudolph) on their wedding day (very reminiscent of On Her Majesty's Secret Service, though I doubt that part sprung from that movie) and this is his opportunity for revenge.

MacGruber gets his old team together (all made up of WWE wrestlers, hence my utter lack of knowledge as to who they are), and promptly gets them all killed due to MacGruber being MacGruber. One member of his retinue at first declines, but upon hearing of the other's death, joins him. This is Vicki St. Elmo (Kristen Wiig), and with Piper on board, MacGruber goes after Von Cunth. 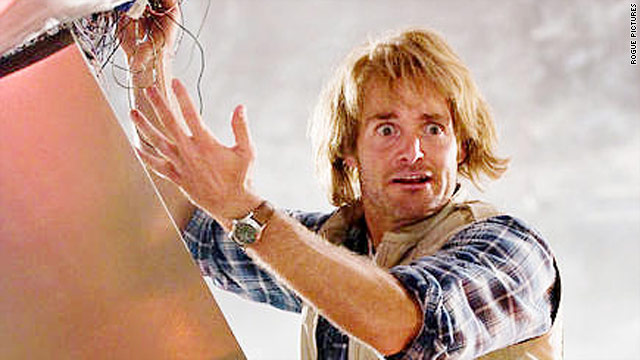 I guess if you are on the same wavelength as a teenage boy you might find a lot of what is going on amusing. To its credit, MacGruber knows all the clichés of an action film: pop/rock songs playing during driving/lovemaking montages, how the authority figures 'don't get it', the reuniting of the elite team. However, it doesn't build anything special or especially funny out of all that.

Instead, I suppose the comedy comes from the fact that MacGruber is so painfully inept at his job. I guess the comedy also comes from the fact that he has an excessive self-confidence with nothing to back it up, how he doesn't change his clothes or that he is always known by one name (I guess kind of like Cher or Madonna, he's always MacGruber, even on his fake tombstone). Director Taccone got what makes some action films so bad, but no one here seems to get the idea that, while those kinds of things are clichéd, they also work within the plots of those other films.

I know, it's suppose to be dumb. However, it can't have it both ways. We're suppose to believe that MacGruber is the best, but it's obvious he's the worst. Since Phillipe and Boothe (side note: when I saw him on screen, I did say 'He's still alive?') are playing it absolutely straight, you would figure they would never go along with anything MacGruber does since it's obvious he's such an idiot.

Forte knows his character down pat, and I guess he kept things on the same level in MacGruber as on the skits. It's just that he can't make something that works in short bursts last long...which leads me, oddly, to the sex scenes. We get treated to two of them, and while the first with Wiig's character was not especially amusing (though again, knowledgeable of how many action films might handle a sex scene), the second one (where we'll call upon to believe he's having sex with a ghost when we see he's basically thrusting his penis into the air) is not funny.

It's creepy, disturbing, again, not funny, and among the worst moments in film history.

I guess this is where the major problem with MacGruber is: it knows what its spoofing, but it doesn't take it anywhere.

I notice that I keep repeating "I guess", "I suppose", "I figure", because MacGruber just isn't a funny film. Nothing makes it stand out. You get dumb people doing dumb things in a dumb way but you don't get anything particularly clever, especially when you have to rely on using the same gags over and over: the sex scenes, MacGruber taking his old-school (very old-school) radio out of his car, his utter cluelessness as to how to do anything close to successful intelligence work. All these things weren't funny the first time round, but seeing them again and again only reinforces that you can't extend a short bit into even a relatively short feature film.

One thing that particularly bothered me is how awful MacGruber is to everyone around him. He, for example, makes St. Elmo don disguise twice for no real reason other than that MacGruber thinks it's a good idea. First, she is forced to dress up as MacGruber (the idea of MacGruber appearing as himself escaping him), the second time as a dead henchman of Von Cunth, only this time with Piper dressing up as MacGruber.

The fact that either of them would go along with all this (especially Piper, who as played by Phillipe again is playing it very straight) is just dumb. It isn't funny, but here again is another example of people repeating the same action and expecting greater returns.

The performances weren't all that remarkable. I figure (there's that phrase again) Kilmer was having fun by being the villain, but not even his name was funny or original (like the movie itself). "It's time to go pound some Cunth", MacGruber says.

I can say I laughed only once, when I heard Lt. Piper rattle off MacGruber's accomplishments: among them sixteen Purple Hearts and, I think, starting quarterback for the University of Texas at El Paso. My hometown audience burst into applause at the mention of UTEP (though I don't know if it was quarterback). Other than this, MacGruber has nothing to say and really no point to having another Saturday Night Live character get the feature film treatment.

MacGruber simply should not have been made.  A character that works in short bursts cannot hold a feature film.  Even if somehow they could manage to create a story that would allow him to carry on for longer than a few minutes, the execution was so horrid it wouldn't have mattered.

That is something Lorne Michaels and those around him should mullet over.