Doctor Who Story 208: The Beast Below

Wipe That Smile Off Your Face...

It seems a curious pattern in the revived Doctor Who. The first story (Rose/The Eleventh Hour) is Earth-bound with an alien threatening humanity with only another alien (The Doctor) and a beautiful Companion (Rose Tyler/Amy Pond) to save the day. The next story (The End of the World/The Beast Below) they go far, far, far into Tellurian future, into space, where an outside force threatens their existence. When I think about it, this isn't a unique pattern: I could make the case that An Unearthly Child/The Daleks followed the same plan, although The Daleks didn't involve the Earth itself. It's just something I noticed and was curious about.

We begin with a group of children coming up to a machine that appears to be giving them gifts. Each one lines up, but one boy, Timmy (Alfie Field) is reluctant to do so. We find out why: he has failed, and is being sent "below". After the credits, we go to Amy Pond (Karen Gillan), floating in space, with only The Doctor (Matt Smith) holding her ankle and keeping her between the TARDIS and the vastness of space. Having run off with The Doctor, Amy and he now find themselves on Spaceship United Kingdom (which I referred to as Spaceship Britain). They encounter Mandy (Hannah Sharp), Timmy's friend, and she's crying among the crowd, which convinces The Doctor there is something wrong and that Spaceship U.K. is a police state.

Amy is told to follow her (which she does) and discovers a tentacle and some coven that drugs her. Meanwhile, The Doctor looking at a glass of water on the ground draws the attention of a mysterious woman with a Phantom of the Opera-like mask. This woman, who calls herself Liz 10 (Oscar-nominee Sophie Okonedo), knows the Impossible Truth: the ship moves WITHOUT engines (which is why the water in the glass doesn't vibrate).

Amy awakens in a room where she must choose one of two buttons: the Forget or the Protest, once she learns the Truth about Spaceship U.K. After discovering the what and why of this enterprise (no pun intended) she hits Forget, but then sees herself on television, telling herself to get The Doctor off the ship and not have him discover the Truth. When The Doctor finds her, he's not willing to forget and hits the Protest button. That promptly sends them below. They are rescued by Liz 10, who is revealed as Her Majesty Queen Elizabeth the Tenth. However, she, along with The Doctor and Amy, have been sent to The Tower. There, they discover the Impossible Truth about Spaceship United Kingdom: it's not a ship, but a Space Whale they've been on all this time, the last one of its kind, and one they've been torturing in the Tower to keep it moving.

The Doctor becomes angry at the thought that Amy wanted to spare him having to choose between freeing the Space Whale and destroying humanity. "You don't ever decide what I need to know," he tells her in a controlled fury. He makes the awful choice of giving the Space Whale a form of lobotomy so that it won't feel the pain and let the humans live. However, Amy realizes the connection between the whale and the children, so she gets Q.E.X. to Abdicate...and both are saved.

In the denouement, The Doctor gets a call in the TARDIS from Winston Churchill, with a Dalek's shadow falling ominously behind the Prime Minister, and as they leave, we see a crack on the side of Spaceship United Kingdom...

The Beast Below has some beautiful moments and images. The opening is perfect: the thought of having a machine tell you that you've failed and getting sent to The Beast Below is brilliant in scaring children. The sight of Amy floating among the stars is so beautiful and I believe it will be remembered as one of the most sublime visual moments in all Doctor Who, certainly among the best in the Fifth Series/Seasons.

I also include the closing moments: what could be more frightening than seeing a Dalek in shadow, so close to Churchill and the Prime Minister calling the Doctor for aid? The story by Steven Moffat also has wonderful bits of dialogue. It is amusing to hear The Doctor say, "I never get involved in the affairs of other peoples or planets". Please, in his entire history The Doctor has been the model on how to violate the Prime Directive (yes, I know that's Star Trek, but why not have a little sci-fi mash-up?). The idea of having the Royal Family still going with a Queen Elizabeth 10th is also amusing. I also applaud the nod to Scottish independence: Amy is informed there are no Scots on Spaceship U.K. for her to be compatriot with. "They wanted their own ship," Mandy tells her. "Some things never change," she replies. 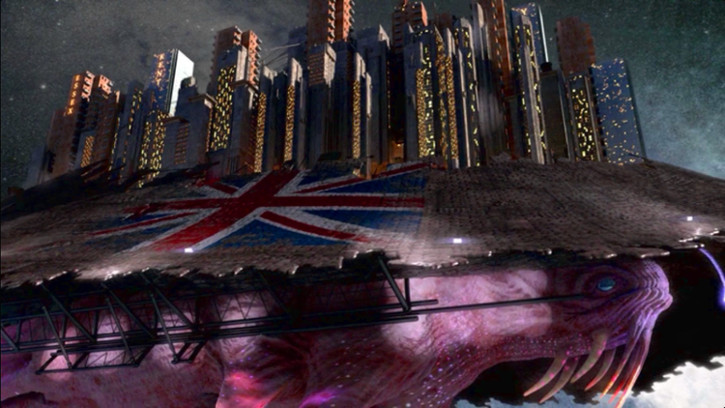 However, the story is unfortunately quite rushed and there is no real build-up involving such a menace as the beast below. Once The Doctor & Amy are thrown down I figured out Spaceship U.K. was a big monster floating in space. Perhaps I was meant to discover this quickly, but there was no real mystery in that department.

I was also a bit thrown off by The Smilers, the objects within the machines that kept a happy face until someone decided to Protest or failed. Then they became unhappy, and at times there was a third shift to downright satanic. I had no problem with the faces (although I wondered how it could change three times when it only had two sides to it). My problem was in figuring out if they were machines or creatures. I figure they were machines since the peaceful Space Whale would have been incapable of creating them even if it wanted to.

I also didn't like one bit of dialogue. Her Majesty tells the Doctor, "Help us, Doctor. You're our only hope". I don't know if Moffat was conscious of the fact that this is one of the most parodied lines from Star Wars (substitute 'Obi-Wan' for 'The Doctor'), but it was wrong to have it in. Regarding the Smilers, I think the build-up to them only to have them mixed with all these guys in monk-like robes didn't go over well. They won't be like the Autons or the Ood, since The Smilers are dependent on the humans to keep going. Finally, I wonder how it works that Amy is the one who saves the day. I'm still undecided if this is a good thing or not: it shows she's bright, but does it show that the Doctor isn't? A little iffy for me.

Director Andrew Gunn brought out strong performances from the two leads. I was surprised to see The Doctor so angry, almost vengeful and abusive to Amy. Smith is showing himself to have the fun of Troughton with some of the anger that marked Tennant's tenure (side note: the 10th Doctor always wanted to say, Allons-y, Alonso. I always wanted to say Tennant's Tenure).

Gillan, to her credit, isn't a damsel in distress but showing herself to be a strong, competent woman (who apparently IS smarter than The Doctor). My favorite though is guest star Okonedo: Elizabeth X Rocks! There's no other way of putting it: she's all action and a Queen who cares for her people but also knows what they are doing to the Space Whale is torture.

Maybe that's a reason why I can't quite warm up to The Beast Below: this semi-animal cruelty bit doesn't wash with me. If and when I have to worry over whether I'm being lectured about something then it takes me out of the story. I also am not thrilled with seeing another crack (this time on the Spaceship U.K. itself). I know they're going for something, but again, not a fan of foreshadowing. Curious on the parallels between the Last Space Whale and the Last Time Lord: too obvious or not followed through? Again, jury's still out.

Ultimately, The Beast Below was a dip from the strong The Eleventh Hour: a bit rushed (even for an hour's television show), slightly muddled (the Smilers weren't a big part of the story and almost unnecessary given the monk-like men there--unless they were one and the same, again, some confusion) and with a monster that was A.) easy to figure out and B.) not a real monster.

The performances bring it up, but not enough for me to go wild over it. I conclude with this: I was fortunate to go to London, and here is a picture of the Tower of London. Though I didn't get to see everything there, I did not find a Space Whale there. It's unfortunate that the initials for Spaceship United Kingdom spell out S.U.K. 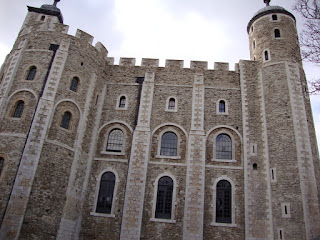 Next Story: Victory of The Daleks
Posted by Rick at 1:19 AM