Doctor Who Story 207: The Eleventh Hour 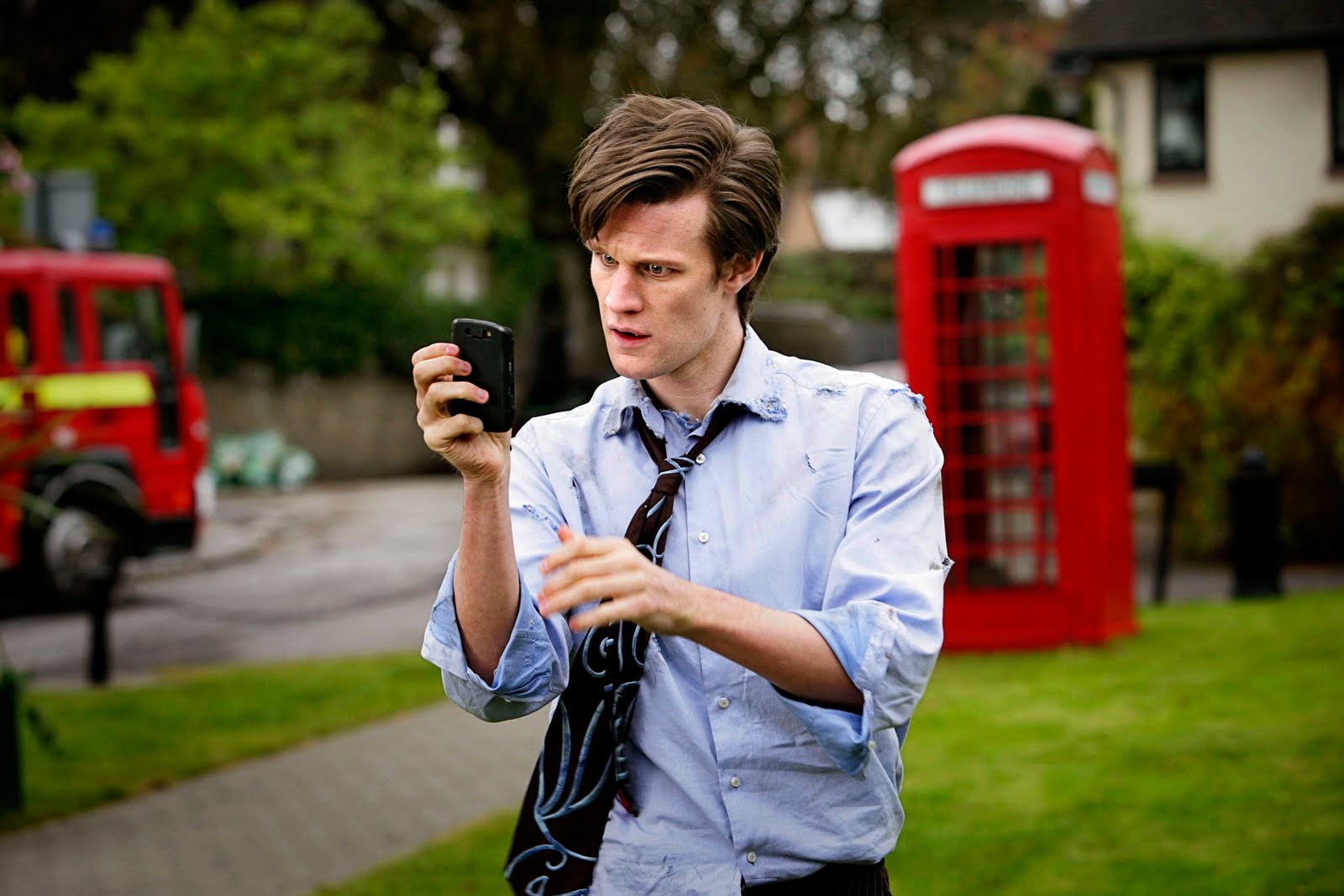 An Apple A Day Keeps The Doctor To Stay...


This is the debut story for Matt Smith as the Eleventh Doctor. We have a most curious situation with The Eleventh Hour. For the revived series, David Tennant WAS The Doctor, considering that Christopher Eccleston was there for only one season. Given that, Smith (who at twenty-seven is the youngest actor to take the role, and relatively unknown even in his native Britain let alone The New World/Australia) had an extremely difficult act to follow.

How did he do? It isn't fair to judge a person's success or failure based on ONE story, but given The Eleventh Hour, I think Smith will turn out to be a memorable Doctor.

We pick up where we left off at the end of The End of Time, with the TARDIS crashing down to Earth. Once he finally lands, he encounters an inquisitive young girl named Amelia Pond (Caitlin Blackwood). She invites him into her home where he tries all sorts of food which he says he likes (and then proceeds to reject) until arriving at his liking for custard and fish fingers. Amelia shows The Doctor a crack in her wall, where something unearthly lurks. Using his handy-dandy sonic screwdriver, The Doctor opens to crack to reveal a giant eye and a voice stating, "Prisoner Zero has escaped". The Doctor realizes the TARDIS is still in danger of terminal failure, so he leaves but not before promising to come back for Amelia in five minutes.

As can be expected, the Time Lord misjudges time...badly. He unwittingly returns to the same place, desperate to stop the danger he realizes lurks within. However, he is knocked unconscious by a leggy policewoman, who we discover is Amelia (Karen Gillan), who now goes by Amy, and who is not really a cop but a Kiss-O-Gram Girl dressed as a cop. We also discover Prisoner Zero, and that the Atraxi (a form of galactic Interpol from what I understood) demand he surrender himself or "the human residents will be incinerated". There are only twenty minutes to save the world...plenty of time for The Doctor. 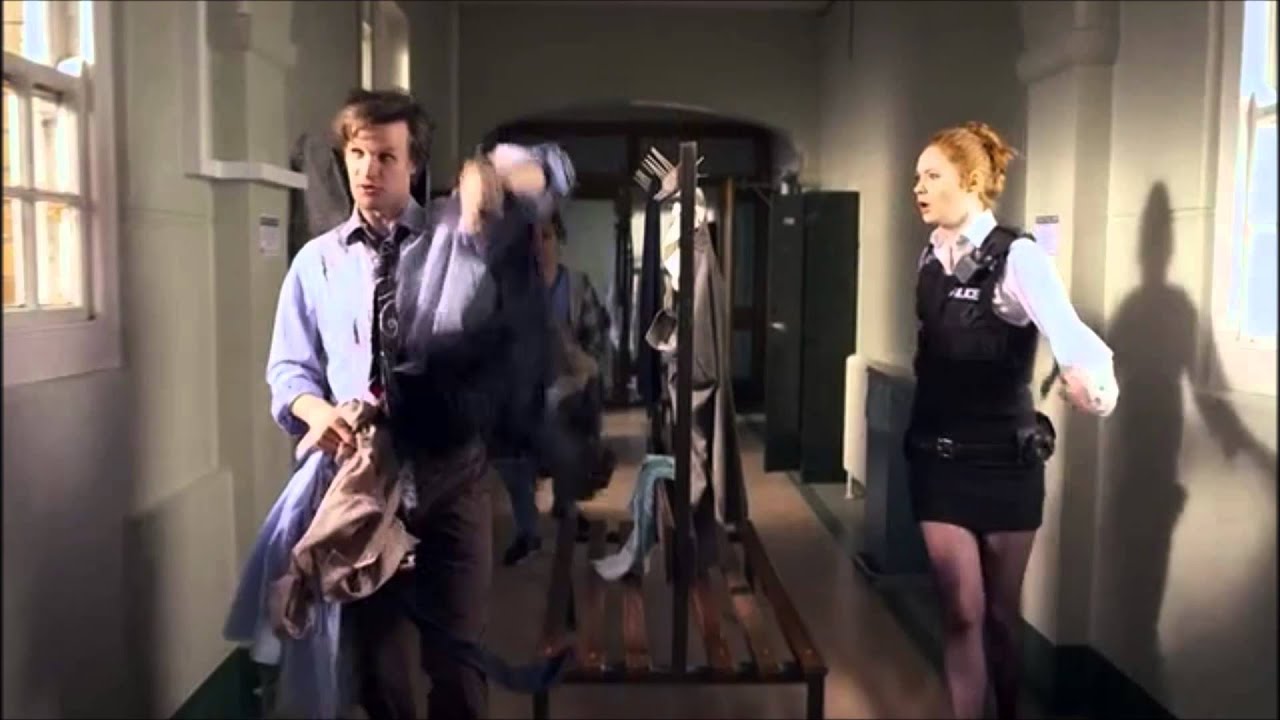 However, Amy is none too thrilled to see him again, given no one believed her when she told them about "the raggedy doctor"...twelve years ago. Prisoner Zero has been discovered to be taking the form of various patients at a nearby hospital who are in a coma (living but non-active lifeforms). Using a handy laptop to attract leading scientists, he with their help create a virus that will attract the attention of the Atraxi.

Once Prisoner Zero is finally apprehended The Doctor selects a new wardrobe (Amy taking a bit too much interest in seeing him in various stages of undress) and The Doctor summons back the Atraxi to let them know in no uncertain terms HE is the Earth's champion against all enemies foreign and alien. We get a coda where he comes back, and again misjudges time...this time by two years. The Doctor asks Amy to come with him, and she does, leaving her wedding dress behind...

Given the darkness and despair of The End of Time, I think writer/producer Stephen Moffat made the right decision to make the Eleventh Doctor's debut story a bit lighter while still having some sense of danger. Here, he isn't facing down the conquest of the Earth by the Daleks or The Master, though there is still menace due to the possibility of the destruction of the Earth by an outside source.

It was also a wise decision to start with a child who later grew into the new Companion. It establishes a history with his future Companion, something he didn't have with Rose Tyler or Martha Jones (while he had some history with Donna Noble, she was an adult at the time, so it was far briefer than with Amy). A side note: The Doctor seems to have a strange knack for interrupting weddings: Amy basically ran off with another man on the eve of her wedding, and Donna was literally walking down the aisle when she find herself in the TARDIS in The Runaway Bride. Curious, that, but I digress.

We can allow ourselves the opportunity to reflect on how Amelia/Amy would have coped all those years with memories of the Doctor, not to mention with the sense of abandonment and lost hope that disappearance would have left her with. Also, since children are a strong fan base for Doctor Who, I think many children would love a chance to travel in the TARDIS, so by starting out with a child Moffat allows them to tap into their own fantasies of time/space adventure.

Prisoner Zero in his various guises was scary but not too frightening, which is again a great nod to the children's audience. The supporting performances were excellent: I especially give credit to Patrick Moore's cameo as himself. Sir Patrick (who always reminds me of the actor Charles Coburn) is a respected British astronomer and television presenter, so his cameo would be more appreciated by a British public than an American one (unless you though Charles Coburn was still alive).

Tom Hopper as Jeff (who I think was Amy's brother, the episode never to my memory established who he exactly was) didn't have much to do on screen, but he managed to create a bit of comedy with his small role. Arthur Darvill, who plays Nurse Rory Williams (a young man who keeps seeing comatose patients wandering around town and may be Amy's fiance) does a fine job of projecting both fear and confusion to all the goings-on. 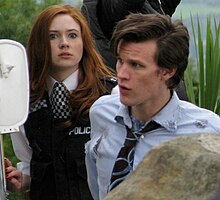 As for the leads, they are both instantly successful. Karen Gillan makes of her Amy a girl both bright and forlorn, someone who has abandonment issues but who is determined to move on with her life regardless. Like Tyler and Jones, she can take her of herself thank you very much. However, like Noble, she has insecurities about her own future and perhaps, herself. Certainly, she shows that she isn't completely honest about her profession: she tries to explain away how she could have been dressed as a policewoman and a nurse AND a nun and had all those be her 'jobs'.

Now, moving on to Smith. His Doctor appears to be more Eccleston than Tennant in that he's a bit more manic, even a little bit crazy and frantic. However, he seems to owe more to his sartorial hero Patrick Troughton in that I get the sense he will be a slightly more comic (though still serious when necessary) Doctor. Tennant near the end turned rather dark and intense, and while the stories called for it he lost some of his light touch and sense of adventure. Saving everyone took on too much of his time.

Smith, on the other hand, seems to be a Doctor who is now rediscovering the excitement of being able to travel through time and space. He knows he's intelligent, and he DELIGHTS in that. However, he also delights in telling other aliens that he's got the Earth's back.

The Eleventh Hour has beautiful cinematic moments courtesy of director Adam Smith (no relation). The highlight for me was near the end when The Doctor has the Atraxi analyze the Earth's history. The Doctor asks the Big Floating Eye to see the threats the Earth has faced. We get a montage of monsters new and old: along with the revamped Cybermen and Daleks, we also get a shot of the Sea Devils which have appeared in only two stories (their eponymous story and Warriors of the Deep, and both from the original series).

He then asks them who has been there all this time, and we get treated to a brilliant montage of all the Doctors from Hartnell through Tennant, and then Smith walks in through the montage and tells them (and us), "I'm The Doctor". It was such a perfect moment I kept repeating it over and over, awed by both the beauty of it and the respect it showed to Doctor Who's past and all the actors that preceded Smith (who curiously was only seven when the original series went "on hiatus").

However (and here's my flaw-finding), I wasn't overwhelmed with that fish that was Prisoner Zero in unaltered form. Maybe I had images of the documentary Oceans floating in my mind (pun intended) but I kept thinking on how it looked like something from the depths of the sea. I also thought the comedy routine about the Doctor finding the right dish to munch on after regeneration went on too long and while it might have been humorous didn't really add much to the story at large.

Finally, on a more technical point, if The Doctor had not changed between the first and second time Amy sees him, why didn't she recognize him sooner? At least, I didn't get the sense that she knew who he was until at least after she goes into the 'secret room'. Granted, maybe I didn't notice it, but that did leave me wondering. One more thing: Prisoner Zero's warning to the Doctor about "Silence will fall"--not a big fan of foreshadowing in television.

It may be that I'm too nit-picky on such things. As it stands, The Eleventh Hour is a first-rate introduction to a new Doctor. Near the end, when The Doctor comes up to the TARDIS and asks it, "What have you got for me this time?", that is a question ALL of us are asking. Judging from this first story, what it has for us is excitement, adventure, and a lot of fun. The Eleventh Hour may not be its finest, but it certainly is a most jolly good time.

Next Story: The Beast Below
Posted by Rick at 1:55 AM