Doctor Who Story 002: The Daleks 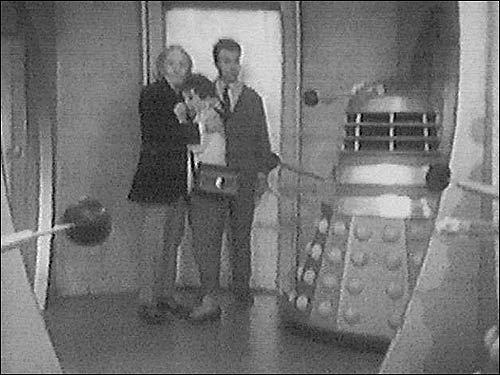 The debut story for Doctor Who (An Unearthly Child) did well but it wasn't a spectacular event. It took the second story to bring the series to near mania-status, and it had nothing to do with the actual cast. Rather, what pushed the series into the public mind were the villains: odd machine-like creatures with a staccato voice that reminded people of salt-and-pepper shakers. The overarching story had no official title and there is still debate as to what it SHOULD be called. Doctor Who Magazine refers to it as The Mutants, but for this article I shall side with the BBC and call it what they do: The Daleks. Two reasons: 1.) there is already another story in the Third Doctor's time with the official title of The Mutants, so it will cut down on the confusion, and 2.) with the exception of The Chase, every story where the Daleks appeared as a major part of the story had "Dalek" in the title in the original series (as in Day of, Planet of, Genesis of, etc.). That being the case, I figure it is acceptable to have the title be The Daleks.


This is the story that put Doctor Who in the British consciousness. Over the course of seven weeks (individual titles being The Dead Planet, The Survivors, The Escape, The Ambush, The Expedition, The Ordeal, and The Rescue, which curiously would be the name of another First Doctor story) audience thrilled to how The Doctor, his granddaughter Susan, and the human companions Barbara Wright and Ian Chesterton battled against these monsters. If I may put in my own views as to why this happened, I suspect it was because the Daleks were something that had not been seen in science-fiction. They were not humanoid in any way, yet they were not mechanical either. It's as if the robotic appearance hid something far more sinister...

In this story, the travellers land on a Dead Planet. They discover a perfectly preserved city in a valley below and while the Doctor wants to go explore it, no one else does. In order to get his way, the Doctor sabotages the TARDIS to force them to go to this city. There, they discover a group of metallic creatures who hold them hostage. These are the Daleks, and they suspect the crew to be Thals, another species with whom they fought a war with 500 years ago that ended with a neutron bomb explosion. The Daleks took refuge in the metal city while the Thals remained outside. The Daleks decide that the travellers would be a good bait to get at the Thals, whom they believe are mutations as a result of the neutron explosion. They also want the anti-radiation drugs the Thals possess to see if the Daleks could use them to return to the outside.

Susan, the youngest and the one least affected by the radiation poisoning on the planet, goes to the TARDIS and discovers the Thals. Far from being monsters, they are healthy humanoid beings. The war between the Daleks and Thals has radically shifted both races. The Daleks were once the teachers and philosophers and the Thals were warriors, but after the war Daleks had become ruthless and given to annihilation tendencies while the Thals had turned to pacifism and farming to survive on this planet named Skaro. The anti-radiation drug has the reverse effect on the Daleks, killing them.

They discover they now need the radiation to live, and decide the best way for them to conquer Skaro is to release a second neutron bomb, exterminating the Thals and allowing the Daleks to leave their underground lair at the same time. The crew discovers they need a piece of equipment the Daleks have taken from them in order to leave Skaro and they convince the pacifist Thals to fight the destructive Daleks before they destroy all Skaro. After passing the dangers of a deadly swamp and a cave one group infiltrates the Dalek city while the Thals attack the Daleks. The Daleks are defeated and the TARDIS crew leave, but as they leave something goes wrong inside the TARDIS, and they crew are knocked unconscious...

What elevates The Daleks (and may have been at the heart of its success with the viewing public) is what elevates all good science-fiction stories: it works on two levels--the story as presented and the story as allegory (case in point, District 9). I have no way of knowing what writer Terry Nation had in mind when he wrote the story, but certain things should be remembered as one watches. It aired between the end of 1963 and the beginning of 1964. Only eighteen years had passed since the end of the Second World War, and the memories of a murderous "nation" trying to conquer the world was still fresh in the minds of the majority of the viewers. In Episode Six (The Ordeal) the connection between the mythical Daleks and the all-too-real Nazis is clear: the Daleks call for the "total extermination" of the Thals and give a Nazi-style salute with their arms.

It isn't hard to imagine how just like the German nation had once created great thinkers, scientists, and artists but had degenerated into a mindless group that would kill anything that was different from them, the Daleks also had turned from the philosophy they once taught to a murderous group without feeling or emotion. In the same vein, after the horrors of the First World War (especially trench warfare) many Britons were vehemently opposed to getting involved in any war. Like the Thals, the mighty warriors who had conquered an Empire on which the sun never set now did not want to fight ever again. There is a good question in Episode Five (The Expedition): "Which is more important: to fight and live or die without fighting?" The question asked by the Thals could have also been asked by Winston Churchill when he first sounded the alarm against a public who wanted to ignore all the dangers of a Nazi Germany in the hope they could share the planet.

You could also explain the success of The Daleks (and of Doctor Who) in that the story also taps into the fear of nuclear war. The two superpowers (the United States and the then-Soviet Union) had the power to destroy all humanity should they make the Cold War a hot one. There was a real fear of what could happen after The Bomb fell. Extermination? Mutation? A Dead Planet? Would the world of Skaro be where the world of Earth might be headed to?

All of this, of course, couldn't be said aloud, and certainly not in a children's program (which Doctor Who was considered at the time). However, for the parents watching, the fears of a nuclear attack, coupled with what their lives would have been like with a Nazi victory would have made them think about events both past and future. Without being obvious, The Daleks could bring these real life fears into people's living rooms. In short, The Daleks made people think.

Granted, this might be an over-reading of The Daleks, but the possibility is still there. 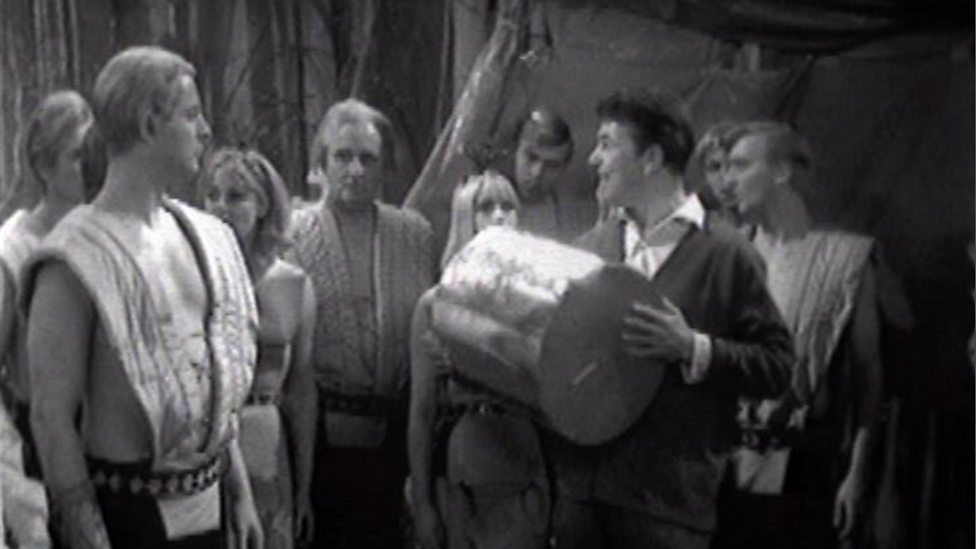 However, all this isn't to take away from its entertainment value. The Daleks is an adventure story, and it tells its story well. Like all good adventure stories, we are taken to another world where there is a villain out to destroy our heroes, all of whom the audience can identify with. Children could visualize themselves in the innocence of Susan, adults with Ian and Susan (almost surrogate parents) and the elders could see themselves (somewhat) as The Doctor.

The monsters themselves are the highlight of the story. Here, we get the sense early on that they are not robots. Instead, there are living things inside them, and the fact that we DON'T get a look inside them is what makes them more terrifying. Yes, they do have a plunger as part of them, but the fact that there is no human characteristic to the Daleks aside from a strict voice creates a sense of mythic beings.

We can see the character of The Doctor develop: here, he starts out as slightly duplicitous and deceitful, but over the story he realizes that his actions have consequences and that his stubbornness has put others in danger. Hartnell's performance inspires adults to understand (in a way) that their seniors may be manipulative in order to get their own way but also allows children to trust that he will find a solution out of greater and greater danger.

The best performance I think is Carol Ann Ford's Susan: throughout the story she manages to bring a sweet innocence to her performance. Take for example Episode One (The Dead Planet) where she cares deeply for a flower that is perfectly preserved. Her heartbreak when Ian accidentally destroys it is perfect, as is the fear she expresses when she encounters the Thals. In fact, when she has to go to the TARDIS in Episode Two (The Survivors) it is reminiscent of Snow White in the forest. William Russell's Ian is the requisite action hero but I give credit to Jacqueline Hill: even though she at times is relegated to a damsel in distress she manages to bring intelligence to her Barbara Wright. They as a group are still getting to know each other: often Susan will refer to them as "Miss Wright" and "Mr. Chesterton".

Of course, The Daleks isn't without its flaws. At seven episodes it's a very long story, and at times it felt as if the story was being stretched because it was suppose to be that long. I never understood why the Thals had these vaguely-Roman style names (Ganatus, Tammosus, and Dyoni the woman). At times you could tell the Dalek "Army" was really cut-outs and that the Dalek power plant was a picture.

There was also the issue of the costumes, which I will credit to Costume Supervisor Daphne Dare. She certainly lived up to her name: the outfits the Thals wear at times were almost shockingly risqué bordering on S & M gear: the pants looked like leather that had vertical rips. Modesty was not a Thal virtue. Some of the effects are also dated: the Swamp Monster in Episode Five (The Expedition) reminded me of a souffle. Also, near the end of Episode Seven (The Rescue) we have what seems to be the TARDIS crew and the Thals running down endless corridors, which appears to be the beginning of the cliché of Doctor Who running down endless corridors.

The most telling (and humorous) flaw is William Hartnell's misreading of a line (which I understand became an unfortunate trademark of his, known as "Billy Flubs"). In Episode Two (The Survivors) he states that what had been left to them outside the TARDIS and what the Daleks were after were "anti-radiation GLOVES", then he quickly corrected himself to say, "anti-radiation DRUGS". The cast, to their credit, acted as if this is what was supposed to have been said. If I had been there, I would have burst out laughing (which curiously, is what I did when I heard that). Well, even The Doctor is only human...


As it stands, The Daleks may be the second Doctor Who story, but the first Great Story. The story, though long, still holds up. The effects, at times dated, still have some solid work (as when the Daleks fire their weapon and melt the wall in Episode Four--The Ambush) and strong performances by everyone.

Yes indeed: The Daleks have risen to exterminate another day.


Next story: Inside The Spaceship (aka The Edge of Destruction)