Miss Pettigrew Lives For a Day: A Review 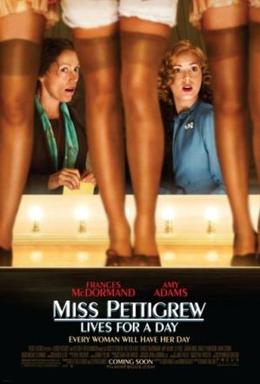 MISS PETTIGREW LIVES FOR A DAY

The song What A Difference a Day Makes could have been the theme to Miss Pettigrew Lives For a Day, if that song had been popular in 1939. In the course of one amazing day, Miss Guinivere Pettigrew (Frances McDormand) lives LIFE! She sees things and does things she's never done before and is swept up into a wild world that she had only heard faint rumors of: one of decadence, frivolity, and romance.

The source material for the film, I'm told, was pretty risqué and outrageous for its time. The film itself, which having good moments (see picture above) never quite lives up to its billing.

It's the height of the Depression in Britain, and war looms ominously over that sceptered isle. Miss Pettigrew (Frances McDormand), nanny, has been made redundant (fired in American English). Her agency, tired of her constant dismissals, won't send her to anyone new. However, desperate times call for desperate measures. She takes the card for a new employer and goes to be interviewed.

Miss Pettigrew appears at the home of one Delysia Lafosse (Amy Adams), American singer/actress who has a most complicated love life. She has been maintaining an affair with Phil (Tom Payne), a producer's son who could get her the lead in a West End show while living with Nick (Mark Strong), the owner of the nightclub she's been performing at, all while dealing with conflicting emotions about her pianist Michael (Lee Pace), who is passionately in love with her.

Within minutes of her arrival, Miss Pettigrew finds herself rescuing Delysia from her own antics. Grateful for her help (and believing her to have been Carole Lombard's social secretary) Delysia accepts Miss Pettigrew as her new social secretary and sweeps her up into her world: one of fashion shows and fashionable nightclubs, where there are no soup kitchens but caviar all round. 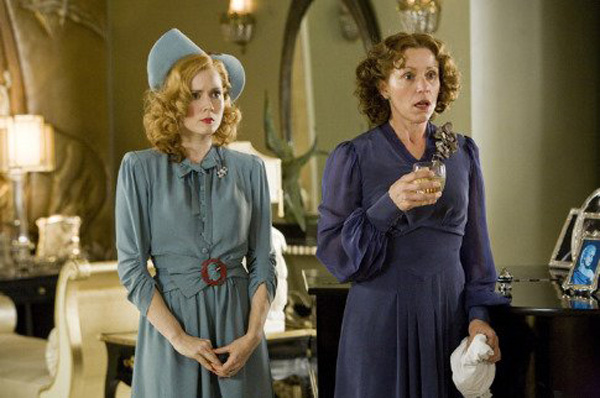 In the course of one day, Miss Pettigrew gets a make-over, meets a dashing fashion designer named Joe (Ciarán Hinds), convinces Delysia who she should end up with (and if you can't guess who she chooses, you don't go to the movies much), and discovers the joys of life and love.

Miss Pettigrew has all the elements for a light, inoffensive little comedy, but somewhere along the line it felt as if it got tired and bored by itself but decided to push on anyway.

I can't point to anything specific as to what went wrong because on paper, everything should work. However, things didn't quite gel as they should have. McDormand starts out fine as Miss Pettigrew but then I started wondering about WHY she had never lived. Was it her poverty or her religious upbringing or a combination or neither. She wasn't completely convincing as a suppressed prude.

Lee Pace, whom I shall always harbor a slight dislike due to Pushing Daisies (a show I HATED from the get-go), is excellent as Michael as is his British accent. Mark Strong, who has had a bad run of films in recent years (Body of Lies, Sherlock Holmes, Kick-Ass) surprised me in his small role: he was actually able to do comedy and do it well.

The real star is Adams. She is delightful as Delysia (love the name): she is for most of the film a flighty, self-absorbed creature who is nonetheless delightful and sparkling. When she relates to Pettigrew that she was in the film Four's A Crowd with Errol Flynn, Pettigrew, a big film fan, is thrilled. "Which part were you?" she asks. Without missing a beat, Delysia responds quite innocently and nonchalantly, "The crowd".

However, near the end of the film, as she struggles between fulfilling her dreams of stardom via the West End show Pile On The Pepper and following Michael back to America, we see the giddy mask drop slightly. We see a hardness to her, a determination to succeed and not be left out in the dark. Her talk with Pettigrew as they head for the nightclub for her Farewell Performance shows what range Adams has.

Bharat Nalluri directed things well, but I think the failure comes from the adaptation of Winifred Watson's novel by David Magee and future Academy Award-winner Simon Beaufoy (Slumdog Millionaire). Given that they only had one day to get everything done, at times it felt oddly slow and at times as if they were trying to throw EVERYTHING they could think of into the story. Miss Pettigrew just goes along with all the wild goings-on but even though the film is centered around her we don't ever get a glimpse into her worldview or her feelings on the madness she finds herself surrounded by. Her romance with Joe just seems tacked on, even though I believe it was a major part of the novel (not having read it, I'm in no position to say that for certain). At the end, when Delysia makes her choice, I felt the audience at the club applauding at the kiss was just far too clichéd to believe.

Charm and lightness can only go so far, and while Miss Pettigrew Lives For A Day has both, it doesn't have them in enough measures to carry the film all the way through. It's amazing that even though it was only 92 minutes long, it felt A.) far longer than that and B.) telling less in that amount.

It isn't offensive, it isn't bad, but it isn't all that interesting. I'm glad Miss Pettigrew lived for a day. I just wish she'd lived through a faster and more interesting day.