Guy Ritchie's version of Sherlock Holmes is if someone had read various Sir Arthur Conan Doyle novels while drunk and attempted to retell it while still drunk. Sherlock Holmes has a lot of action but hardly any sense.
Sherlock Holmes appears to take elements from both The Canon and Sir Arthur's life for its story. There's Irene Adler (Rachel McAdams) from A Scandal in Bohemia. There's bits from another story, The Sussex Vampire, which has the element of the undead. You could even see bits of how in real life Sir Arthur was very much into spiritualism & the supernatural and a hint of The Lost Symbol: the secret societies, the dark rituals.
The sinister Lord Blackwood (Mark Strong), has been murdering women in some vaguely occult rituals, is caught, and executed. Within hours however, he has apparently returned from the dead. This surprises Dr. John Watson (Jude Law), who not only helped capture him but was the attending physician at Blackwood's execution. Blackwood's ultimate plan is to take over the world (or at least the British Empire) in some plot that involves knocking out any opponents in Parliament with poison gas.
Into this mix comes Sherlock Holmes (Robert Downey, Jr.), fascinated by this bizarre case. Holmes not only has to fight Lord Blackwood, but American criminal and adventuress Irene Adler. His frenemy with benefits is somehow involved in all the machinations, though on whose side is a mystery. This mystery doubles as we know she is working for the mysterious Professor Moriarty, who might be playing both sides. 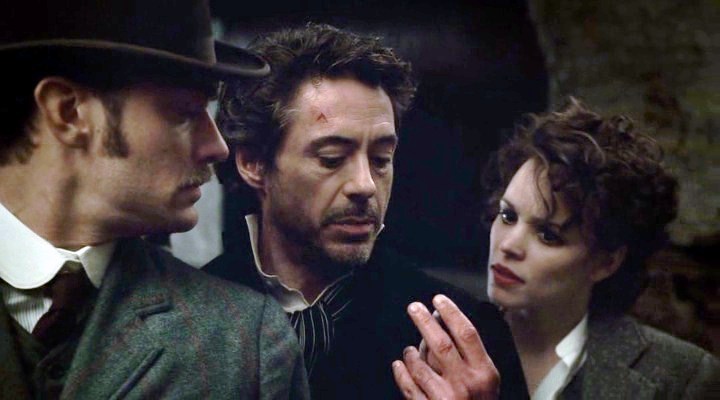 I figure that the majority of the audience has never read a Sherlock Holmes story. Instead, they saw it for what it was sold as: an action film with cool fight scenes, story secondary. Perhaps the mind boggles at Guy Ritchie tackling the legendary literary character, but it's really not a shock at all.
Ritchie has a passion for the criminal underworld, and Victorian London offers him a chance to revel in his frenetic style while "branching out" by having a different time period. Perhaps this is why I cannot warm up to him as a filmmaker: he keeps making the same film over and once more. It's one thing to make films in the same genre: Ford was a master at Westerns, Hitchcock of the suspense thriller. However, they told different stories and by and large tried to keep the story at the core of the film, not their cinematic style.

Ritchie, on the contrary, is all about style. You can tell that straight from the get-go, when Holmes explains how he's going to knock out someone and you get to see it in slow-motion, and then again at regular speed. This he does twice during the course of the film, and oddly he doesn't seem to do it that much when he explains how he reached his correct deductions. It's as if Holmes would be wasting his time explaining how he solved a mystery because it would get in the way of the physical action.

That is only a symptom of the poison coursing through Sherlock Holmes. The real disaster is the story. It's a damn idiotic one.  Four people came up with this (Michael Robert Johnson, Anthony Peckham, and Simon Kinberg with the screenplay, Johnson and Lionel Wigram with the story), yet it doesn't look as if they actually read the source material. 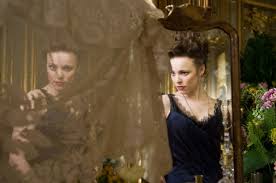 They didn't have to go through all this patent nonsense of quasi-Satanic rites and Masonic-type shadowy organizations. It's as if they didn't trust the material and felt it needed more fighting, less thinking to make it palatable. Perhaps they wanted to take some of the stuffing out of old material, but went about it the wrong way. It would have been easier to introduce their Holmes with creepy undertones and stay with Canon by adapting The Sign of Four or The Hound of the Baskervilles.
I don't blame them for wanting to come up with an original story, but it was needlessly complex and convoluted to the point where it becomes flat-out idiotic. It also violates one of one of my Golden Rules of Film-Making: Never End Your Movie By Suggesting There Will Be A Sequel. Here, they used it without needing it. Why couldn't Professor Moriarty be the villain and escape? There would have had the suggestion of a sequel without having us go through all this nonsense.

The performances were far better than the movie itself. Robert Downey, Jr. is having a renaissance in his career, and his Sherlock, while flawed by relying more on muscle than on brain, still manages to project a quick witted, obsessed consulting detective. Jude Law's take on Watson is first-rate, less the idiot stooge and more an intelligent man who doesn't mind a good fight. I can't recall if he had the flaws of a gambling addiction in the stories, but they did right by having him be an Afghan veteran which he was in the stories. Curious, how some things remain the same more than a century later. The interplay between Holmes and Watson, which was more in the vein of a buddy comedy, had a quality to it which made it believable that these two had an affection for each other that neither fully acknowledged. Mark Strong rose above the silliness of his Lord Blackwood, delivering a performance that almost makes you believe he truly is some sort of Satanic entity.
The one name that comes off badly in this is McAdams: pretty to look at, but adding little to nothing to the actual story, what there was of one.

The fight scenes were done in Ritchie's frenetic pace, and if you like that you might enjoy them. One can't help but wonder, however, if there weren't too many fights that went on too long, stretching the movie needlessly.
Hans Zimmer's score was rare in that it was quite pleasant. He's never been a personal favorite but in Sherlock Holmes he gave it an offbeat, almost playful score that suggested a genuine romp the film didn't deliver. Perhaps there is something wildly wrong when you pay more attention to the score than to the screen.

My sense is that Sherlock Holmes is not a film but a franchise starter, with an inevitable sequel. They'll ignore all the good work Conan Doyle wrote and decide the best thing to do is make Holmes an action hero rather than the cold, logical, thinking machine he's described at.

Of course, this is done not for those who've read and loved the stories, but for those more inclined to G.I. Joe: The Rise of Cobra than The Sign of Four. I have a great deal of affection for Sherlock Holmes, the character. I was tempted to do something the great detective would not do: let his emotions overrun his reason. While Downey, Jr. and Law make Sherlock Holmes well-acted, the movie itself is quite, yes I'll say it, elementary.