SHERLOCK HOLMES: A GAME OF SHADOWS

Holmes and His Little Shadow...

I believe Sherlock Holmes is a piece of crap that bastardized the entire Holmesian Canon, and to have anything related to Guy Ritchie's mess of a film would be an insult to the memory of Sir Arthur Conan Doyle.

Longtime readers will know that I always say that whenever you see a colon in the title, it's a clear indication that those behind that particular film will make more of them.  Given that, it's not surprising that A Game of Shadows would be the first of perhaps many sequels, a whole Holmesian Cinematic Universe.

What is surprising is that somehow, despite their best efforts, they managed to make a film even worse than the first.

The plot of A Game of Shadows may be convoluted and idiotic on screen, but elementary to describe: it's a remake of League of Extraordinary Gentlemen in all but name.  Professor James Moriarty (Jared Harris) is planning to start a world war and profit from it.  It's up to his intellectual equal Sherlock Holmes (Robert Downey, Jr.) to stop him.  To aid him is Dr. John Watson (Jude Law) who doesn't want to help at all but finds himself doing so anyway, even if it means nearly missing his own wedding to Mary (Kelly Reilly).  Holmes also has the wit and wisdom of his older brother Mycroft (Stephen Fry), a vague figure in government, while Professor Moriarty has expert assassin Colonel Sebastian Moran (Paul Anderson).

I'd like to stop for a moment to say seeing it was Colonel Moran in A Game of Shadow was about the only genuine surprise I had while watching.

Into this mix comes Gypsy Queen Simza (Noomi Rapace).  She's there for the thinnest of reasons, as is American criminal mistress Irene Adler (Rachel McAdams, fulfilling what I guess was some contractual obligation to pop in for what was basically a pointless and contrived cameo).

That's about it in the story department.

A Game of Shadows appears desperate to go out of its way to be as idiotic and nonsensical as possible.  We never ever stop to actually find out what is going on because Ritchie and his scribes (Michele and Kieran Mulroney) don't really care about an actual plot with such unnecessary things as motivation or even coherence.

Instead, all they want is to use Holmes and Company for one mindless action scene after another, logic be damned.  The truly important thing, Ritchie believes, is to show us his prowess with slow-motion.

And oh, how he shows us again and again how it will all turn out.  As I watched A Game of Shadows, I kept referring to these as Holmes' 'psychic moments' because he wasn't actually deducing something.  He was really predicting how something would turn out.  That had the effect of essentially removing the mystery out of the situation.

I counted a total of six of these 'psychic moments', though we see that in the final one Moriarty is equally blessed with such abilities.  I figure this is how Moriarty is Holmes' equal and the 'Napoleon of Crime' in Holmes' words.

Somehow, the performances weren't there.  They certainly weren't there for the women: McAdams disappears, perhaps forever, within the first ten to fifteen minutes. Reilly isn't there for long either, and treated rather badly to boot.

Rapace has such a blank expression throughout A Game of Shadows.  Perhaps she was trying to figure out what exactly the plot or or how her character related to anything to do with the film altogether.

I give some compliments to Harris, who actually would make a good President Grant in terms of appearance I thought, as the calm and calculating villain, but Downey was a gigantic disappointment as Holmes.

At least in the first Sherlock Holmes he was more fun.  Here, he appears to think he should mix a little bit of humor, such as dressing in drag, with a far more serious tone and a weaker British accent.  At one point, Downey, Jr. actually looked like The Joker from The Dark Knight. 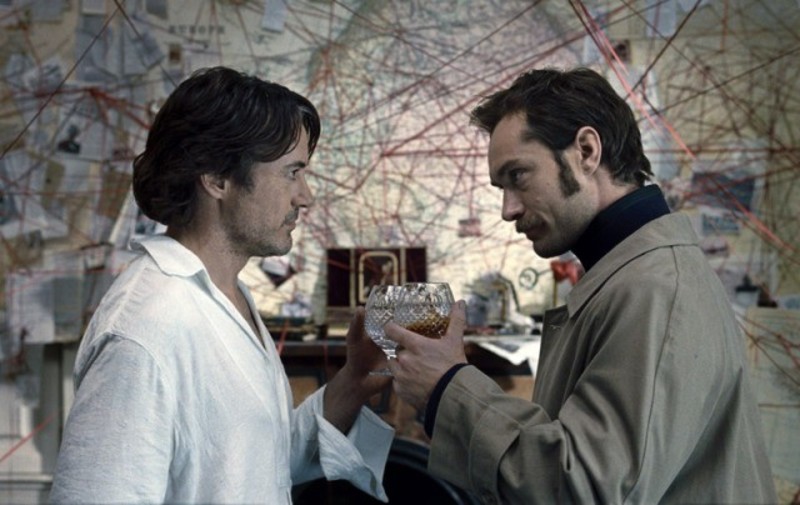 Law isn't as good as he was in Sherlock Holmes either, and I suppose it is because the material really isn't there.  Equally useless is Fry.  Any thought that this man is suppose to be some intellectual giant was pretty much abandoned when we see a nude scene with Fry's bulbous body flapping about.

Even the little things I liked in the first Sherlock Holmes (such as Hans Zimmer's zippy score) were watered down and irrelevant in A Game of Shadows.  What is suppose to be an epic escape into the forest turns instead into a showcase for more slow-motion, which dilutes everything.

A Game of Shadows is just a way to ruin Sherlock Holmes' reputation among current film-goers who may never watch the Jeremy Brett series or the Basil Rathbone films.  There is nothing in A Game of Shadows that is really Sherlock Holmes.  It really Guy Ritchie adapting his signature fascination with the criminal underworld to a Victorian/Edwardian setting.

A Game of Shadows in the end is SINO: Sherlock In Name Only.