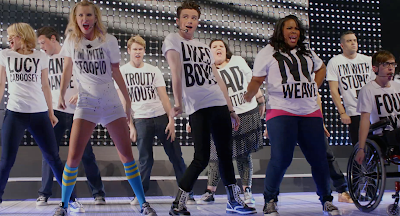 I was not as enamored with the teen show Glee as all my other church friends were, and I put that up to the fact that, unlike them, I have seen actual musicals versus what Glee presents: warmed-over pop song covers shoehorned into whatever plot is thrown in.   Granted, I did find things in what I saw of Glee that I thought were good: some of the acting, a few character arcs, and some of the actual singing and musical staging.

However, as time has gone by, I believe my views on Glee have grown harder and harsher. I could up to a point tolerate how the songs were jammed into the story rather than be allowed to flow naturally.

However, Glee became a willing victim of its own excess and press: All Those Guest Stars!  Theme Weeks!  A Spin-Off Where They Looked For the Next Guest Character! Repetitious Stories!

That last part was what I thought Glee was: Spanish teacher/Glee Club sponsor Mr. Schuester would rally his checklist group (all races, genders, sexual orientations and special needs students) into PUTTING ON A SHOW, villainous Coach Sue Sylvester would get wind of it and plot against them only to be foiled, and repeat.

It was turning into an oddball version of American Idol.

Of course, I had long maintained that Glee was basically The O.C. meets Cop Rock, but at least for the first year or so critics salivated to what they saw as 'originality'.   It is only now, that the ratings have gone down, the enthusiasm has gone way down among the 'Gleeks', and I predict that within two to three years, Glee will have its swan song.

More than anything else, Glee: The 3-D Concert Movie  may be the apex of its shameless self-promotion and belief in its own brilliance, this idea that Glee is the Citizen Kane of television programming.

Despite it being a popular show (curiously enough, with born-again Christian youth groups who don't appear bothered by the open homosexuality and premarital sex abounding on it), I really don't believe people were calling en masse for a film version of Glee.  However, we got it, and its a curious creature: part concert film, part informercial.

We get what one would expect on Glee: a bunch of young adults and in Cory Monteith's case, a nearly-thirty-year-old passing as a high school student, doing a series of covers of songs ranging from Aretha Franklin to Lady Gaga. However, in what in retrospect might be a more disturbing element,  we also throw in interviews with the members of their cult (said Gleeks) telling us variations of "Glee saved my life".

Somehow, Glee isn't just a television show.  It's a source of salvation.

All these people going on stage, their adoring fans screaming as if in a revival, are a blur to those of us who don't see Glee as entertainment or salvation.

I think this is why Glee: The 3-D Concert Movie, is really so hard for those not in the know to embrace.  The show itself is perplexing, and the movie doesn't bother to try to set anything in context.  It assumes you are already immersed in the Glee-World, and if you're not, it keeps you out, just like the Cheerios (see, I do know a few things).

How ironic that a spectacle like Glee: The 3-D Movie which is ostensibly about inclusion does everything to keep non-Gleeks as outcasts among the sparkles and showstoppers.

Here's the best way to break down Glee: The 3-D Movie: a concert film where we see the various actors perform the songs they remade famous.  However, as I was watching, it was becoming harder and harder to figure out whether I was watching the actual actors or the characters doing the songs.

This comes courtesy of the way director Kevin Tancharoen put the actual show together.  We get a great many performances. I counted a total of 20 songs, which to my mind must have been an inordinately long evening but very little that would indicate that those on stage were portraying the characters.

We get a few hints in the forms of what appear to be sketches between them addressing each other by their character's names (and for those of us not with the "in crowd", we really don't know who or what they are) but it's clear that Glee 3-D isn't interested in actually telling a story or integrating the songs into any story.

Not unlike the show itself.

What I can say about the actual musical performances were that there were hit and miss.  What I always say about Glee is that they are covers, a bit like having a good karaoke singer perform.  They are just doing the song, not actually giving a performance.

The best or worst example is whenever Lea Michele, from whom I get the impression that she believes herself to be a true legend, attempts her very damnedest to be the new Barbra Streisand. We see this when she does not one but two musical numbers that Babs made legendary: Don't Rain on My Parade from Funny Girl and the duet of Get Happy/Happy Days Are Here Again first done by Judy Garland and Streisand.

It isn't that she isn't without some talent; it's just for me that as hard as she tries Michele isn't Streisand, or even that good of a Streisand impersonator.  Moreover, it makes things more confusing when the backstage footage has her playing her character of Rachel but some of her other castmates appear to be playing themselves.

Yes, I am aware that she was recreating Spears' performance at the MTV Video Music Awards, but given that she is suppose to be playing a high school student, it does make things awfully unseemly when men who appear to be in their fifties are seen cheering like tween girls at Justin Bieber. Moreover, the numbers to the uninitiated appear flat-out pointless.

I'd also like to say that, sorry Heather: as bad a singer as Brit-Brit may be, she's miles ahead of you. 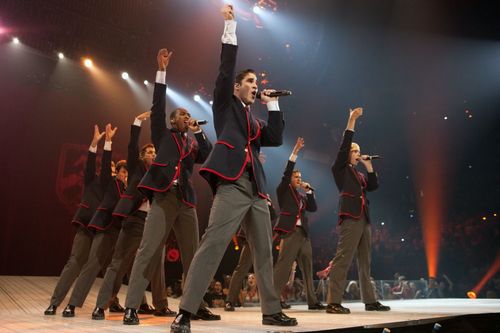 Given that I come to Glee 3-D with barely a knowledge of who is who or what is what, I found Kevin McHale to be the weakest singer.  He had not one but two big numbers: a cover of Michael Jackson's PYT-Pretty Young Things and Men Without Hats' Safety Dance.

The first was nothing special, but I have always found the second to be a mechanical, robotic rendition, and his weak vocals don't help.  Was it meant to be robotic?  Perhaps, I've no idea.

I digress to point out that it might nice for his character of Artie to imagine he can walk out of his wheelchair with the greatest of ease given McHale is not handicapped, but one can't say the same for all those in wheelchairs who don't have that luxury to just get up and walk away.

Allow me again to point out that there are some remarkably creepy moments.  During the show we get endless shots of the fans squealing with delight whenever one of their favorites gets up and gets down.  Somehow, I can't understand how people well past middle age could be waving their foam fingers up in the air like they just don't care.  I felt sad for them: all these men cheering on people old enough to be their grand-kids as if they were actual members of New Directions.

Now, in the mix of all the song and dance, we get a trio of 'inspirational' stories intercut within Glee 3-D.  There is Janae, the midget cheerleader (she called herself a midget, so don't get on my case), Josey, the Asperger's Syndrome-afflicted fan who found a release to be social via Glee, and Trenton, who saw in Chris Colfer's character of Kurt a role model which allowed him to come out as a proud gay teen.

Every so often we cut to their stories, although how exactly Safety Dance connects with midget cheerleader Janae becoming Prom Queen one never figures out.  It's nice to see Janae, Josey, and Trenton doing well for themselves (though to be frank, I'm fighting the temptation to say I seriously doubt anyone would have thought Trenton was ever in the closet given how he was, but I digress), and they may all put their better lives to being the result of Glee, but Glee 3-D again doesn't make a connection between their stories and the performances.

The stories in fact only appear to be there to point out just how important Glee believes itself to be, how the world is a better place because of it.  My view is that no television program could ever be that important.

Finally, I want to point out to Kellen Sarmiento, the "Mini-Warbler" who has become famous for being able to imitate an imitation, in this case Darren Criss' rendition of Katy Perry's Teenage Dream.  It might just be me, but someone, a five-year-old singing "Let's go all the way tonight/No regrets, just love" doesn't look cute; it looks, again, creepy.  Or am I wrong to think a toddler singing "let you put your hands on my, in my skin-tight jeans" may just be a bit weird?

One more thing: as in almost all 3-D films, really, what was there in Glee: 3-D that made such tricks necessary?

Glee celebrates the outsider, the unpopular kids, the 'losers'.  It's a strange thing that Glee: 3-D did everything to keep those who aren't part of New Directions out of the loop.  If you are a Gleek (and trust me, within five years you won't be), Glee: 3-D may thrill you.

For those of us who are more Academic Decathlon than Glee Club, everything about Glee: 3-D is like Glee the show: one-note.

June 2018 Update: As it stands, Glee has had very sad postscripts. Cory Monteith and Mark Salling died by their own hand: Monteith of a drug overdose at 31 two years after the concert film was released, and Salling by hanging himself in January 2018 after pleading guilty to possession of child pornography.
Posted by Rick at 2:55 PM