The Tempest is one of my favorite Shakespeare plays, so I went into Julie Taymor's version eager to see a great adaptation.  This version of The Tempest isn't terrible, but one wonders if Taymor opted to focus more on the visuals than on the text which diminished the story and distracted from one of the great works of literature.

This storm is caused by the sorceress Prospera (Dame Helen Mirren), the rightful Duchess of Milan, who had been forced into exile by Antonio, along with her daughter Miranda (Felicity Jones).  On the isle, Prospera is served by her slaves, the spirit Ariel (Ben Whishaw) and the human Caliban (Djimon Hounsou).

Prospera shall have her revenge.  With the promise of freedom to Ariel, he creates chaos for the shipwrecked crew, causing them to see monsters on their journey, sparing only the kind Gonzalo. Ferdinand and Miranda soon find each other through Prospera's machinations and fall instantly in love.  Caliban, resenting his enslavement, is discovered by Stephano and Trinculo, mistakes the former for a god, and plans revolution.  Eventually, all's well that ends well, with Prospera forgiving those who betrayed her, saving Alonzo from the plots of Antonio and Sebastian, and freeing Ariel.

The biggest change in this version of The Tempest is the casting of Mirren in the lead role, sex-swapping the role of Prospero for Prospera.  Truth be told, although under most circumstances I'm a Shakespeare purist I wasn't bothered by the gender-switch.  Mirren is able to make us forget the role is for a man, although I kept thinking why would a woman be the rightful ruler when there was a man who could take the duchy.  This is a time where male heirs take precedent over any woman if one is available.

The acting is mixed.  Mirren doesn't overdo the drama of Prospera's dilemma, although when we first see her rule the storm it is inadvertently funny.

Actually, besides Mirren, almost everyone else is rather bad.  I don't think Ferdinand and Miranda are suppose to be so boring in their insipid portrayal of love, but somehow Jones and Carney looked dim and lifeless as these two young lovers.  They never looked like they were actually in love, more like they were rehearsing for a high school production where they did a parody of dull teens.

Whether Carney and Jones were going for making Miranda and Ferdinand a dull, dim couple I cannot say for certain.  They however, were subtle while the 'comic relief' were so over-the-top I didn't laugh.  Hounsou was the worst: with his exaggerated body moments and delivery, he fell into the trap of playing Shakespeare as if it were Scripture, to be treated with reverence rather than attempt to make it sound like real speech.  Molina and Brand weren't funny when the dialogue opened itself up to make the two drunks a great source of laughter.

In the case of the latter,he appears to be either playing himself or found himself wandering into a Shakespeare production unaware of where he's at.

The decision to have Molina and Brand skip the Shakespeare text and go for swearing as if they were in another film altogether did not help matters.

Again and again, I couldn't find where the actors could make the script sound like dialogue.  Instead, they made it sound like it was a Shakespeare performance, treating the words with respect but not bringing it to life.  We see this with Alonzo's court: the delivery of all of them was one where we could make out that it was a 'performance': grand and slightly exaggerated rather than simple and direct.

It's rare when we see Shakespeare treated as if it were real: Franco Zeffirelli's version of Romeo & Juliet and Taming of the Shrew, and more recently Ralph Fiennes' Coriolanus are good examples of making Shakespeare real.  Yet I digress. 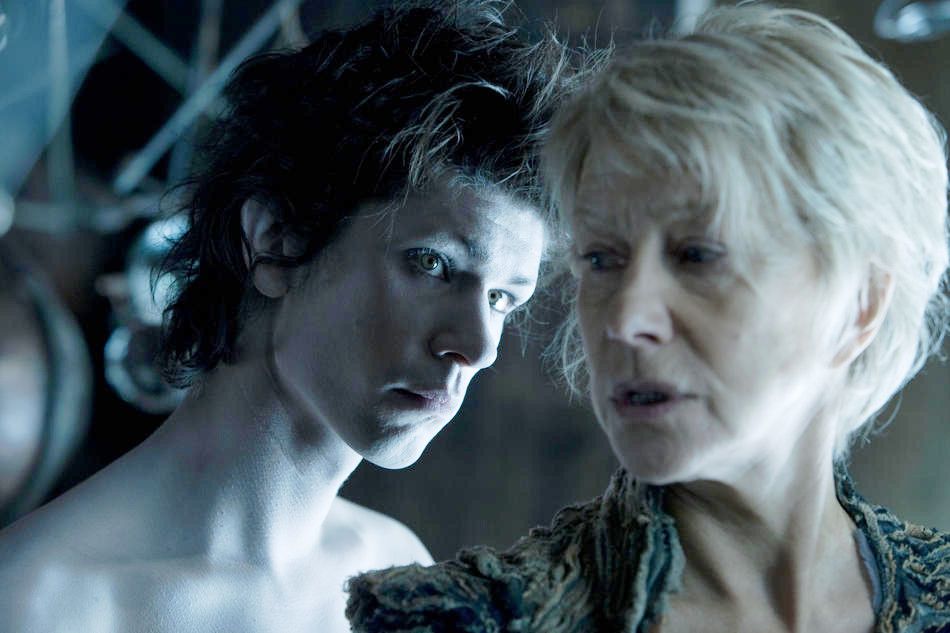 Besides Mirren, I think Ben Whishaw's Ariel did a better job than almost everyone else.  He could have been more mischievous and his eagerness, perhaps naivete, for freedom could have been better, but on the whole he relished causing trouble.

The biggest issue with The Tempest apart from being far too reverential of the text is that Taymor at times let the visuals take precedent.  Some scenes were wildly inventive and had the distinct Taymor touch such as when Ariel torments Alonzo's Court by appearing as a Harpy. Some, however, didn't, as when the hounds of hell pursue said Court.  Moreover, Elliot Goldenthal's score was a hit and miss affair: the rock riffs were distracting.

I will say that Sandy Powell's costumes were worthy of an Academy Award nomination.

As it stands, this version of The Tempest isn't as good as one hopes it would be.  Taymor couldn't help herself in making the grandness of the visuals the central focus of the film, while allowing the actors the overplay their roles.

I'm of the view that casting a woman in the role of Prospero was not a bad idea or one that sunk the film.  Mirren is a talented actress who can play almost anything well.  It did not elevate the production either, so I'm neither here nor there on the subject.

I shall always love Shakespeare and The Tempest, but this version of The Tempest is not the stuff dreams are made of.