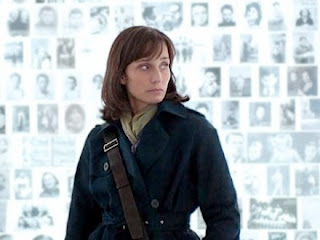 Holocaust films tend to revolve, rightly, around the actual victims inside the camps.  It isn't often films deal with those on the outside: not collaborators but those living during the Nazi occupation, who weren't party to the horrors around them but who still go through some of the consequences that are almost beyond bearable.  Sarah's Key takes us to where few Holocaust-related films have gone to: to those who were neither perpetrators or straight-out victims but who still, generations later, bear the scars of the most monstrous and inhuman era in recorded history.

Sarah's Key has two intertwining stories from 2009 and 1942.  In the present-day, American journalist and expatriate Julia (Kristen Scott Thomas) has decided to do a feature-length article about the roundup of French Jews in Paris under the Occupation.  She has her own problems: a teenage daughter and a French husband named Betrand (Frédéric Pierrot) who is deeply immersed in business and not to thrilled to find he is going to be a father again.

Her research gets into the story of young Sarah Starzynski (Melusine Mayance).  She is one of the thousands rounded up by the French police where she, her father and mother are held at the Vel' d'Hiver bicycle track.

The conditions are appalling: little water, no bathrooms, and desperate people committing suicide.  In a fateful move, Sarah gets her younger brother Michel to hide in a secret room at their Parisian flat, with Sarah taking the key.  Her early story involves her desperate attempt to get back to the flat and let Michel out.  On her journey back, she is forcibly separated from her parents, escapes with another girl with the help of a French camp guard, and taken in by a kindly French couple.  Once Sarah does arrive back at her old home, the discovery of Michel, while unseen, is still a horror.

It's now, during Julia's research, that she makes a shocking discovery of her own: it is her husband's family who had taken the apartment and her father-in-law and his father who are there when Sarah bursts in to find what remains of enfant Michel.  Her future in-laws were thoroughly unaware of Michel's existence and that the secret behind Sarah's Key was kept by Betrand's father and grandfather.

Said father-in-law, Eduard Tezac (Michel Duchaussoy) would have preferred for this to have been buried with him as it was buried with his father, but Julia is determined to find out what happened to Sarah, who was not listed as having been murdered by the Nazi or Vichy regimes.

Eduard tells Julia that his father had kept in touch with Sarah's adopted family, and from here she tracks down Sarah's story.  Sarah functions, but sinks into bouts of melancholia.  Eventually she leaves for America, and marries.  At first Julia believes she's found Sarah, but we learn that the Mrs. Rainsferd she's tracked down is the second Mrs. Rainsferd.  Sarah Rainsferd had died in the 1960's in a car accident.

At first, it appears to be the end of Julia's search, until the second Mrs. Rainsferd tells her Sarah and her husband Richard had a son.  Now Julia goes from Brooklyn to Florence, where William Rainsferd (Aidan Quinn) at first rejects the idea that his mother Sarah Rainsferd is also Sarah Strazynski, a Jew.  Eventually, his father Richard, close to death, tells him of Sarah's background and Jewish ancestry.

In the coda, we go to 2011.  Julia is now divorced from Betrand and living back in New York with her new daughter.  She reunites with William, who tells her he's met Sarah's French adopted family.  He also learns that Julia's infant daughter is named Sarah.

The theme of Sarah's Key can be summed up by what a minor character, a historian who gives Julia information about the Vel' D'Hiver  roundup tells her: if you look into it, you don't come out unscathed.

Any film about a difficult subject, ranging from the Shoah to slavery to September 11th, has already a heavy burden to it.  The positive thing about Sarah's Key is that this little-known story is handled on an intimate level.  In other words, rather than attempt to give us a grand overview of what occurred during the Vichy regime, the film instead does two things right: one, it keeps us focused on one particular family and two, it balances remarkably well the stories of Sarah and Julia without shortchanging one or the other.

Major credit for this is due to director Gilles Paquet-Brenner, who also co-wrote the screenplay based on Tatiana De Rosnay's novel with Serge Joncour.  Whenever we go from 1942 to 2009, the transitions flow easy and are rarely jarring.  The film also allows us to understand that Julia is not just doing research on Sarah's story and that there is nothing outside of that for her.

Instead, we see that she is a full person: marital problems, problems with her in-laws, all these things allow us into her private life.  Where in other films the research may have overwhelmed her private life to where it becomes all-consuming, Sarah's Key allows us to have those respites and see Julia has troubles of her own which would make an interesting story in and of itself.

It truly is incredible that after her splash in The English Patient, Kristen Scott Thomas hasn't been as big a star as her talents should have made her.  She is perfect in both English and French, and even more remarkable is the fact that her American accent is flawless.  Scott Thomas underplays Julia, never going for big emotional moments but instead registering her horror, her anger, in small ways.

For example, when she discovers both what actually happened to Michel and that her own father-in-law knew the truth about Sarah, her reaction is one of shock and horror, but it's never big.  Instead, it is almost quite, which makes it all the more tragic.

Credit should also be given to Mélusine Mayance as the younger Sarah.  She has a very difficult task: to make Sarah an average girl, one with fear but also with a determination to rescue her brother at all costs.  Her best moment is when she finally comes back to the apartment: her racing up to get to him as fast as possible actually inspires a fleeting moment of hope, while her discovery of Michel's ultimate fate is all the more horrifying and haunting.

Even though we never actually see Michel, Paquet-Brenner creates a scene where what we can see in our own mind is far more horrifying than what could have been shown.  He showed great restraint in what was already a gruesome scenario, and Mayance carried that off brilliantly.

In the smallest of roles, Quinn is an actor that really should work more.  Like Scott Thomas, Quinn in his few brief moments does a good job of making his William someone who can't quite come to terms that everything he knew about his mother was not true.

It really isn't until the war's end where Sarah's Key starts to flag, as if the story was becoming exhausted.  I got the sense that once we found that Sarah left for America, we were rushing headlong to end it all.  The momentum was lost, and it became a series of "hit this point, then this point, then that point".  Throwing in the second Mrs. Rainferd, then throwing in the unknown son, then throwing in his discovery of his mother's secret past: again, it appeared as if everyone was rushing.

A minor fault I found to an overall engrossing film.  Sarah's Key isn't about the actual crimes perpetrated by the Nazis and their Vichy collaborators.  Instead, it's about those who are caught up in horrifying situations not of their doing, and that there were victims of all types.  It is about how the truth may set one free, but how it can also be a painful and traumatic experience for those who were indirectly affected by things beyond their control.

In Sarah's Key, there are few if any villains, but rather all sorts of collateral damage to acts of unspeakable evil.  Then again, even if it causes tremendous pain, these evils must be spoken of, lest we forget...