The Change-Up: A Review 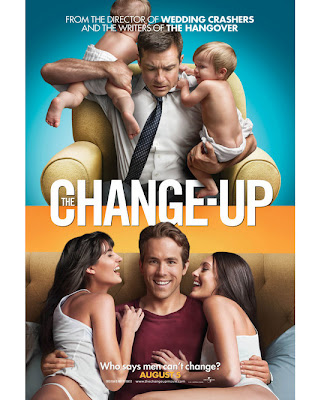 I remember when 'body-switching' movies were all the rage: Vice-Versa, Like Father Like Son, 18 Again!.  There may be a resurgence, with 17 Again (not a prequel to 18 Again!) and now The Change-Up.  I know The Change-Up isn't reinventing the wheel when it comes to body-crossing films, so one should go into it without thinking we're going to get great wit and/or wisdom from it.  However, when you keep writing the phrase 'cringe-inducing', you have to say the entire thing should have been rethought.

Mitch (Ryan Reynolds) and Dave (Jason Bateman) have been friends since childhood.  Now both men in their mid-thirties couldn't have more different lives.  Dave is a harried father of three who burns the midnight oil as an attorney.  Mitch is a high school drop-out and sometimes-actor who has no interest beyond the parade of women he beds.  Dave's life revolves around becoming partner and his wife Jamie (Leslie Mann) while Mitch revolves around himself.  One night, while drunkenly urinating into a fountain, they tell each other they want each other's lives.

Needless to say, they botch their respective jobs.  The horndog Mitch as Dave must control himself from having sex with Jamie while the ever-faithful Dave as Mitch must keep up Mitch's sex life.

As is the case in films like these, both learn valuable life lessons (Dave to enjoy life, Mitch to take responsibility).  Dave as Mitch now romances Dave's legal aide Sabrina (Olivia Wilde) and Mitch as Dave teaches his own manners of dealing with bullies to Dave's daughter.  Finally, the friends are able to find the magic fountain and urinate into it (even if it is inside a mall), and at last, both men return and become better men.

Now, while The Change-Up is billed as a film "from the director of Wedding Crashers (David Dobkin) and the writers of The Hangover" (Jon Lucas and Scott Moore), their collaboration doesn't have either the humor or the heart of either.  What it has is a lot of lowbrow humor.

It can't be a good sign when the film begins with baby poop literally flying into someone's mouth.  It only gets worse from there.

I figure Lucas and Moore decided it would be outrageously funny to have scenes where our characters go through some simply horrible actions, but the only results are scenes that are more revolting than humorous.  As I've stated previously, I wrote the words "cringe-inducing" at least three times while making notes for The Change-Up.  The 'lorno' scene wasn't funny, not because it forced the straight-laced Dave in Mitch's body to break his wedding vows and perform sex in front of people, but because it gets too graphic.

The weak direction where the actors are trying so hard to make it funny does not help.

Far more grotesque is the sex scene where Tatiana (Mircea Monroe), Mitch's 'friend with benefits' comes storming into his apartment.  We are treated to a woman disrobing to reveal an outrageously pregnant woman attempting to all but rape Mitch.

The scene goes on for far too long and grows more grotesque until one wonders whether both Tatiana and Mitch are just flat-out bonkers.

Let's top that with a scene where the inept Mitch-as-Dave attempts to feed Dave's twins.  In a film with both better directing and more compassion for the characters in the script, we could have had a scene that could have been funny/touching.  Instead, we get frankly-horrifying scenes where babies come perilous close to dying by electrocution or filleting themselves.  Somehow, putting infants in mortal danger doesn't strike me as a source of comedy.

Again, I have to remember The Change-Up goes by a paint-by-numbers structure: we see our character's lives, they switch bodies, have to do the other's job and failing at it until they learn important life lessons and return to their bodies to be better men.  However, it is hard to accept that neither Mitch or Dave wouldn't at least try to function or compromise.

How Dave could continue being friends with someone who doesn't appear nonplussed to have sex with his wife or have sex with a woman apparently minutes from going into labor we don't know, or how Mitch could suddenly grasp legal minutia in a few weeks without any help from Dave or Sabrina we don't know either.

What makes The Change-Up really bad apart from the weak directing, a script too reliant on gross-out juvenile humor, and flat characters is that it wasted a great opportunity by having the actors switch roles; we could have had a great deal of fun with Reynolds and Bateman playing against type.  Bateman, who specializes in tightly-wound men (see Horrible Bosses) showed he could easily slip into a bit of a dimwitted man-whore.  Reynolds, who specializes in dimwitted man-whores (see Green Lantern), wasn't as good as he could have been as the now-reticent Dave.

The biggest question in The Change-Up really should be, 'how do you get Ryan Reynolds our of Alan Arkin, who plays Mitch's father?  The fact that we're given these subplots about Mitch's frayed relationship with his father and Dave's relationship with Jamie without really having a reason for having them (Arkin appears in the beginning and twice in the last half-hour) is the attempt to have some human stories tied in to the general gross-out and sex-obsessed humor and mayhem, but since they don't go anywhere they leave one puzzled as to why they are there in the first place.

There are some moments of laughter, such as when Dave-as-Mitch gives questionable guidance to Dave's daughter, but there is just too much reliance on dumb and dirty comedy and characters who go through the same tired motions to make The Change-Up worth your time.

If you didn't see it at the theaters, consider yourself lucky.  If you see The Change-Up on television, you should just change-up the channel.