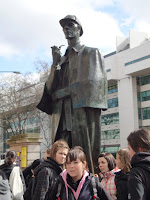 When I was in middle school, I was into Agatha Christie and Sir Arthur Conan Doyle.  I loved mysteries and the Sherlock Holmes, Hercule Poirot and Miss Marple stories were some of my favorites. I admit thought that Holmes was my favorite. He was a hero: someone who used reason and logic to uncover great mysteries.
I did my best to model myself after Holmes. I aimed to be a cold, thinking machine. I played the violin. Mercifully I didn't take Holmes' cocaine or morphine habits, so even I had my limits. Even today, I adopt the adage that if it's of no use to me I don't bother learning something. That I think has led me to make some ridiculous mistakes, but I digress.
In time, my passion for Holmes dissipated, but never my affection for him. I'm too much of a soft touch to be totally impassionate (though I still remain a bit distant emotionally), and I've long since hung up the fiddle & bow.
It was inevitable that I would find and seek out the various television and cinematic interpretations of Sherlock Holmes. There have been several interpreters of Conan Doyle's best-known creation on stage, screen, and television, from the comedic (Without a Clue) to the faithful (the Granada television series). Out of all the actors who've given life to Holmes, three versions now come immediately to mind: Basil Rathbone, Jeremy Brett, and Robert Downey, Jr. I figure that when people think "Sherlock Holmes", they see Rathbone. He made fourteen pictures as Holmes with Nigel Bruce as Watson. I'll say that he most definitely looks the part. His face shows a keen intelligence with a touch of haughtiness. He also had the costume most associated with Holmes: the deerstalker cap and cloak.
While I haven't seen many of his films, there was always an element in them that I always disliked: Nigel Bruce's interpretation of Watson. He made him into this fat, fat-headed tottering old imbecile who couldn't think his way out of a paper bag. He never struck me as right for the part of an action-oriented war veteran and respected doctor. Instead, Bruce made Watson a figure of ridicule, and to be frank the good doctor's reputation has only recently recovered. Watson is still seen in the contemporary mind as an idiot, and that's a terrible disservice to the stories themselves.
I look at Nigel Bruce's version of Doctor Watson and I think this is where the idea of "Watson as boob stooge" originated. Just as many future Sherlock Holmes find themselves in Rathbone's shadow, so do future Watsons.

I also never liked the idea that Holmes lived in the present-day rather than Victorian & early Edwardian Britain. In retrospect I can see why it was done, but somehow to me a bit of magic was lost. Similarly was the decision to create stories for them rather than adapt the original ones. It all boiled down to money, as it was cheaper to make current-day films than period films. Despite that however, I think the Rathbone films serve as a decent introduction to the stories, minus Nigel Bruce.

I came along when Granada Television brought the series to the small screen. Jeremy Brett was not the first to play Holmes on television, but to my mind, Brett is the Sherlock Holmes. It was Granada Television's intention to make all the stories and novels, but tragically, Brett's death prevented this. No one to me, except Rathbone in a close race, can match him.
His Holmes was obsessed, sometimes uncouth, but always on the side of right. He showed Holmes to be someone of fierce intelligence but also more human than before. The adaptation of The Devil's Foot features as part of the story Holmes fighting, and ultimately quitting, his cocaine habit, and is one of the few times that I can remember Holmes ever referring to his associate by his first name of John. It is a credit to Brett that he asked for Holmes to face his cocaine addiction due to his concern that children who would watch would be influenced to take drugs.
In The Empty House, we can see the humanity Brett brought Holmes. The Great Detective apologizes for playing a trick on Watson and tells him that while he is as trustworthy as Holmes' brother Mycroft, "you have a kinder heart".

David Burke and Edward Hardwicke also do more justice to Watson. In the series, he's hardly stupid, albeit not as bright as Holmes. They are men with guns and are not afraid of a fight. Again, in The Empty House, it's Watson that comes to Holmes' rescue. Watson even gets his own: in one story (I can't remember which), Watson ends the story by telling him, "Elementary, my dear Holmes".
If it were not for Brett's death, we could have seen what could have happened once all the stories had been made. There is one caveat to Jeremy Brett: I wonder if his interpretation consumed him emotionally and psychologically. 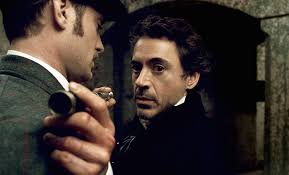 That bring me to the most recent Sherlock Holmes: Robert Downey, Jr. To my mind, he did a wonderful job in making Holmes more action hero than intellectual machine as I think that was the intent. It is a Guy Ritchie film. Still, I can't help think that it all could have been better.
This is prime example of when you give a good actor a good part but in a lousy movie. You keep thinking he could do more, show why he can solve these mysteries in a rational manner rather than being all rush-rush-rush, quick-quick-quick. He falls short of Brett and Rathbone, but if he continues with better stories and better direction he could reach their level.
Jude Law's Dr. Watson, on the other hand, is a mile high better than Bruce's. Here, he's almost totally action and nobody's stooge. Law makes his Watson a man of intelligence, action, and loyalty, things that he was in the stories. It's hard to believe Nigel Bruce could knock down a door to get in or to tell Holmes to stay out of his private life. I suppose that the best qualities to both Downey, Jr. and Law is that they are younger than the team of Rathbone & Bruce or of Brett and Burke/Hardwicke. At 44 and 37, they show a more youthful duo than either Rathbone or Bruce, even though Rathbone was only three years older than Downey and Bruce was actually Downey's age when they started their films.


Out of the limited number of Sherlock Holmes I've seen Jeremy Brett is the standard I measure all others. I don't think any future Holmes will measure up to his interpretation. I can hope that the new Sherlock Holmes despite my dislike of it as a film will introduce people to the novels & stories, eventually the television series. I fear that is a vain hope, since reading for pleasure seems to be a dying art. Still, I hope. 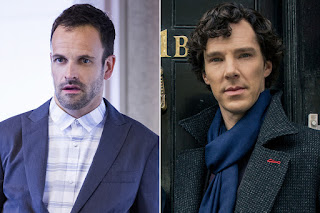 **February 2021 Update: Since the 2009 Sherlock Holmes premiered there have been more Pretenders to the Throne. The BBC released the television series Sherlock, with Benedict Cumberbatch as a modern-day Sherlock Holmes. Likewise, CBS had Elementary with Jonny Lee Miller in the role. I know many who think Cumberbatch is the best Sherlock Holmes of All Time, but I never warmed to him. It does not help I hated Sherlock is in my view downright nonsensical. It's to the point where even the biggest Sherlockian thought Series/Season Four was a total mess.
Elementary lasted seven seasons, building a slow and steady case for being the superior of the two modern-day versions. It's most worrisome aspect, that it gender-swapped Dr. John Watson for Dr. Joan Watson (Lucy Liu) has proven to be one of its stronger elements. For all the fears of romance between Holmes and Watson, there's more erotica about Sherlock's John Watson and Sherlock than Elementary's Joan Watson and Sherlock.
As time has gone on, I've learned and seen more Sherlock Holmes interpretations, which I look forward to reviewing and cataloging.
Sherlock Holmes Retrospective
Posted by Rick at 12:55 PM