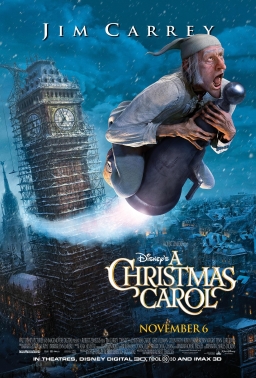 In The Christmas Spirits...

Director Robert Zemeckis seems determined to use motion capture in his films and get audiences to love it as he does. So far his forays into this technology have not met with great critical or commercial success (The Polar Express, Beowulf) but perhaps this version of Charles Dickens' A Christmas Carol may get him over the hump. A primarily family-geared film that adapts one of the best-known and loved Christmas story could lend itself to a more fantastical take. A Christmas Carol isn't a bad film, and there are some things to admire. However, I can't get into motion capture the way Zemeckis has taken up with it. The film captures both the possibilities of the technology and its limitations. The question is whether they will balance each other out or will one cancel out the other.

A Christmas Carol sticks close to the familiar story. Miser's miser Ebenezer Scrooge (Jim Carrey) is visited by three Ghosts on Christmas Eve: the Ghosts of Christmas Past, Present, and Future (Carrey in multiple roles). Each shows Scrooge how he came to be, how he is now and how he may end up. We also see Scrooge's beaten-down employee, Bob Cratchit (Gary Oldman) and his large family. Among them is Bob's youngest child Tiny Tim (Olman again).
Tiny Tim has some ailment that makes it hard for him to walk, but in spite of this he's a cheerful lad, wishing "God bless us, every one" on all mankind, even Scrooge. After his long night of the soul, Scrooge discovers a new joy for life and the True Christmas Spirit. 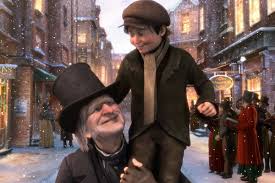 There have been endless film versions of A Christmas Carol; it's an irresistible story to filmmakers. Among the myriad of Hollywood versions have been the iconic 1951 version with Alastair Sim as Scrooge, the animated Mickey's Christmas Carol, Scrooged, A Muppet's Christmas Carol and the film musical Scrooge.  It's ubiquitous in the Christmas season and I venture to say it's one of the stories most connected with the season ('Twas the Night Before Christmas and the actual story of Christ's birth being the others). One should not be surprised that the story now has received the motion-capture treatment.


In theory, this version of A Christmas Carol should open up the story to all sorts of visually arresting images. Up to a point, that is the result: the shots of flying over London are beautiful, and if you look at the people from a distance, they do look like actual people. You also have a greater range with characters. This is certainly the first time I've ever seen The Ghost of Christmas Past as a candle. Zemeckis has been able to open up the story to a greater range because he isn't limited by what is physically possible. The resemblance to real people is good at times.
It's on closer inspection that the resemblance ends, and the people start looking like those animatronic robots on a Disney theme ride.

Take for example Colin Firth as Scrooge's nephew Fred. As seen on screen, he looks like Colin Firth, only inflated to a point you wonder if he is suffering from an illness. Oldman as Cratchit has become almost a midget, and it's speculation whether this was done to show how small he is compared to Scrooge or just because they could make him smaller. 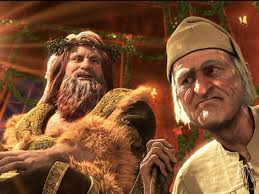 Despite its positives I found there were problems with the film. I know Zemeckis is in a passionate love affair with motion-capture, but as much as he may want to make it work at the moment it still is not at the level to where it looks totally real. I doubt it ever will be.
The result is that sometimes the believability factor breaks, as when during the past Mr. Fezziwig (Bob Hoskins) leaps and does some somersaults. Also, while it may be marketed as a family film, I think the scene that ends the Present section of the film may be quite terrifying to children. You also have a chase scene in the Future section that was totally gratuitous.
Finally, I didn't like the ending. I didn't believe Scrooge's conversion. It all felt too fake, too rushed, to forced. Even though it stays within the traditional story it oddly didn't ring true.

Interestingly, while I saw the 3-D version, I took my glasses off from time to time and found I had no problem watching it. Surprisingly I found this as a positive, since unlike other 3-D spectacles (no pun intended), it works on a flat screen. However, I don't even see why they opted for 3-D when it wasn't necessary. Not even that chase scene, which was suppose to be a highlight in the Third Dimension, was impressive. I would advise against paying more for the 3-D experience since you really don't get enough bang for your buck.

As it stands, A Christmas Carol is good but not great. It won't challenge other versions of the story let alone be the definitive version. As in all technology, A Christmas Carol can work quite well on occasion. However, just like all machines, it doesn't have true emotions at its heart. There's enough to admire, but not enough to truly love.