From what I understand, New Moon (aka The Twilight Saga: New Moon) has only the hot bodies of its love triangle to offer. However, I also understand that this is all the fans actually want. If that is the criterion for the success of the film & novel, then New Moon has fulfilled its duty. Perhaps never in the field of filmmaking have men, especially minors, been so sexually objectified. Whether this is a step forward or not is entirely up to the viewer, but how any of this is relevant to the plot is unknown.


We continue our story of Bella Swann (Kristen Stewart) and her Sullen Edward Cullen (Robert Pattinson). They are the Romeo & Juliet of Millennials: she's human, he's vampire. At a surprise birthday party offered by the Cullens, Bella gets a paper cut, and even though she knows they are all blood-suckers, she seems completely oblivious to the fact a bit of human blood will make them go crazy. In order to save her, Edward decides he must leave her forever.

Without her beloved to pine after, she enters into the deepest depression any teenage girl has ever entered in the history of teenager angst. She, however, discovers that whenever her adrenaline is pumping, Edward appears like a mist, so Bella puts her life in constant danger. Even a shadow version of Edward Cullen is better than no Edward Cullen at all.

I'd call this a might bit obsessive, but I have never been a female teenager in love, so there's that. 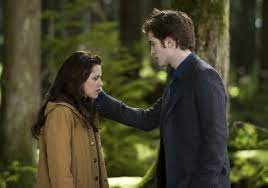 It's at this time that she deepens her relationship with Edward's main romantic rival Jacob Black (Taylor Lautner) a Native American she befriended in Twilight. When it comes to Jacob, there's also a catch: Jacob Black has a secret of his own; he is a werewolf, and there's a long feud between werewolves and vampires. Now, to protect her from himself, Jacob asks Bella to stay away from him too.
It's at this point that I actually felt a little sorry for her. She gets dumped twice by two hot guys, both times for her own good. It really is a case of "It's Not You, It's Me".
For plot reasons Edward has decided to make his vampire status known to the world, which will unleash the wrath of the Vulturi, the Lords of the Vampire Universe. They will have no choice but to kill him, thus freeing him from the torture of being undead without the Greatest Love of All Time. Of course, Bella won't let that happen. After a dramatic rescue (and a chance to see Edward shirtless) they go back to Forks, Washington State where Jacob and Edward have one last dramatic confrontation over Bella, culminating with Edward proposing marriage.

To say that New Moon is an improvement over Twilight (or is it The Twilight Saga: Twilight) is a bit like saying cyanide Kool-Aid tastes better than strychnine Kool-Aid.
I personally think Billy Burke and Michael Sheen hung out together, even though they share no scenes. Why? It's due to them apparently switching acting styles. While Burke's Chief Swann is a wild improvement over his last turn, Sheen decided it was time to let it all ham out so to speak. Sheen definitely put the "vamp" in vampire. I no longer object to his lack of nominations for The Queen or Frost/Nixon after this laughable performance. We also have former Oscar nominee Graham Greene, who's gone from Dances With Wolves to Dances With Werewolves. While it is unfortunate that Native American actors don't get enough work, I am still thankful we didn't have to see him shirtless.

As for the leads, there hasn't been any improvement, and in fact I think they've gotten worse. Kristen Stewart still show no range beyond morose, Robert Pattinson has no range, period. Taylor Lautner's Jacob has no range either, but he does have a well-built physique that we got treated to over and over again. In fact, there were so many shirtless men one would think we'd wandered into a gay bar.

For example, when we see Jacob shirtless for the first time, it's in the rain, as if to accentuate his body of lust. The word "gratuitous" comes to mind, and not just on how New Moon fixates over a seventeen-year-old boy.
I kept wondering why all the Native American men had to be shirtless, especially when I remember with amusement how in Twilight Jacob was all bundled up to keep out the cold. Perhaps all that fur on the inside keeps them warm.

New Moon was sordid, stupid, and beyond insulting. Granted, there is only so much director Chris Weitz and screenwriter Melissa Rosenberg could do with Stephanie Meyer's dreadful prose. I have no way of knowing if the dialogue is taken from the book verbatim. However, if it is then the book is laughable. I can vouch for this since the audience was laughing at such lines as Edward saying, "The greatest gift you can give me is just to breathe". Neither is Jacob telling Bella that she likes him "because you think I'm beautiful".
What man gay or straight thinks such nonsense, let alone says such things out loud? The most unintentionally hilarious line was at the dramatic confrontation between Jacob and Edward.
"Just stay the hell out of my head!" has so many connotations one can't help but laugh.

On a more serious note, I was disturbed by a scene in the film. The Native men brought Bella to their home, where we see one of their girlfriends. Without giving too much away, we see that the effects of when she got too close to him when he got angry. The message I got was extremely disturbing: Girls, it's OK if a man hurts you physically, because it's his nature. Therefore, let him do whatever he wants to you, so long as he loves you.

I know Twilight fans will disagree wildly with me, but if my love left me scarred, I would not stay. Period. Nor would I justify it by saying "he's a werewolf". That just says to me, the animal inside a man can do what he likes to a woman, and she should not defend herself but rather "understand her man" by taking physical abuse. This is the wrong message, and I could not shake the notion that this is a terrible thing to suggest to people, especially the female Twilight fanbase.
Ultimately, New Moon is a chance to make men sex objects and dwell in the immature fantasies of immature women (physically and mentally). There is no story, no acting, no point. Someone, bring a stake and some silver bullets. Team Jacob or Team Edward? One thing's sure: it's highly unlikely that anyone on either team will ever be on the Academic Team.
Next Twilight Film: Eclipse

Here are more views on the Twilight Series...Excuse Me, SAGA.
Posted by Rick at 4:18 PM