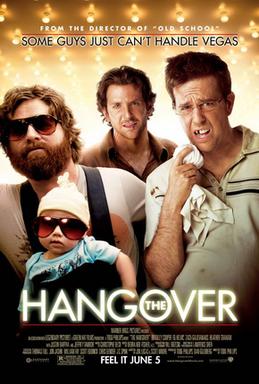 Try To Remember, The Night of Your Bender...

Las Vegas, Nevada has come to be seen as the center of total decadence, where one is freed from all restraints of morality and can indulge in whatever carnal desires one has without having to worry about the end result. There are no rules or boundaries. Whatever inhibitions you may have are gone in Vegas: you can do whatever you want, wherever you want, whenever you want, whoever you want.

In reality, this is not true, but people still flock to Sin City in the belief that "what happens in Vegas stays in Vegas". The Hangover is a chronicle of four men who test out that theory, and find themselves in the wildest, most outrageous, outlandish and funniest bender in film.

Doug (Justin Bartha) is getting married in a few days. For his bachelor party, he, his two friends Stu (Ed Helms), Phil (Bradley Cooper) and Doug's future brother-in-law Alan (Zach Galifianakis) go to Las Vegas for a night they won't forget.
At least, that's the original plan.
The next morning, Stu, Phil, and Alan wake up in their suite to find not only the room beyond trashed, but a tiger in the bathroom, a chicken in the hallway, a baby in the closet, and both Stu's tooth and Doug missing. None of them has any idea what happened to get them in the situation. Trying to reconstruct the previous evening in order to find Doug and get him back to the wedding, they find the evening involved not only the above, but a stolen police car, a Vegas wedding to a stripper/escort (Heather Graham), fey Asian crime lord Mr. Chow (Ken Jeong) and Mike Tyson. The situations the self-named "Wolf-Pack" finds itself in are outrageous, but in a curious sense it all makes sense. It reminds me of a line from All About Eve. In the party scene, Marilyn Monroe is reprimanded for calling a waiter "butler". "Well I can't yell, 'Oh Butler', can I? Somebody's name could be Butler". "You have a point," George Sanders concedes. "An idiotic one, but a point".
In the same way, The Hangover should be on the surface, completely unbelievable: the situations go beyond what could be even remotely plausible. However, there is a logic to everything albeit a very strained one, and one of the positives of the script is that it makes the circumstances these average guys get into at least acceptable enough to go along with it.
Yes, everything in The Hangover veers into almost insanity, but one should remember that the film is meant to be an outrageous, crude enterprise. As such, you roll with the logic presented to you even if it is an absurdist one.

Credit also has to go to the performances. Each of the male characters has their moments. Helms brings a loveable nebbishness to Stu, forever chafing under his girlfriend but who manages to come alive. Cooper gives a star-turning performance with his Phil, a guy looking for a good time but who leads his crew in their efforts to find Doug. He has the looks of a leader while using his teacher logic to find a way to conclusions.
A clear standout is Galifianakis, who makes Alan both completely crazy and oddly endearing in his lunacy. Few people could ask about if the actual Caesar actually lived at Caesar's Palace and make it sound rational.
Although Graham and Jeffrey Tambor as Doug's future father-in-law have small roles, they still bring out the laughs. Mike Tyson, playing himself, also adds not just a hint of menace but also a delightful sense of self-parody that makes him both more frightening and endearing.

The reason The Hangover works is because the story has a sense of logic, and the guys are relatable. The audience knows and identifies with them, and wants them to succeed. The laughs don't stop once the mysteries have been solved: both the reception and the closing credit montage of vacation photos are also some of the funniest moments in the film. Granted, I had to have the Candy Shop cover explained to me, but in the setting it makes it all the more hilarious even if you've never heard of 50 Cent.

My only complaint is that we never got an explanation for the chicken.
Still, that's a minor point. The Hangover is outlandish and outrageous but oddly rational; the film is just flat-out funny from beginning to end.  It does what it set out to do: make me laugh, hard, at its outrageousness and silliness, and what can one ask out of comedies other than that.