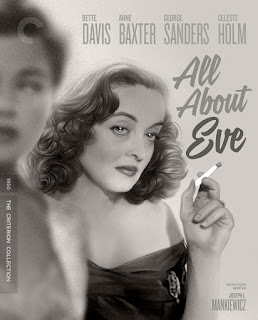 
There are few things as flat-out pleasurable as seeing people at the top of their game. It is a joy to behold people who know what they are doing and do it so well. This is the case with All About Eve, a malicious yet truthful look into human nature and folly. The setting may be the theatrical world of Broadway, but the line between theater and theatrical is a thin one.

The Sarah Siddons Awards dinner is the gala where three narrations tell their interconnected stories. Theatre critic Addison DeWitt (George Sanders), playwright's wife Karen Richards (Celeste Holm) and Broadway diva Margo Channing (Bette Davis) take turns narrating.
War widow Eve Harrington (Anne Baxter) finds herself in the heady world of Broadway lights. Eve soon charms everyone in Margo's circle save for Margo's maid Birdie (Thelma Ritter), who senses something is off. Soon, Eve reveals she is much more than the sweet, always eager-to-please war widow. You see, she's also an aspiring actress, one with burning ambition, and one who thinks she'd be perfect for a part written with someone else in mind.
It isn't long before wool starts falling over and off people's eyes, but while some are ensnared in the evil schemes, others are not. Ultimately, we find that there are other Eves waiting to take their turn. 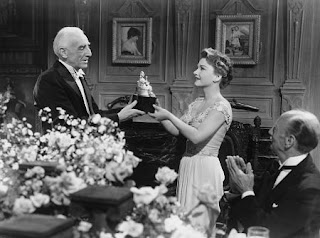 What makes All About Eve stand out is that everything in it works so smoothly it looks almost effortless. Writer/director Joseph Mankiewicz creates a world where people use words as weapons and a single put-down can cut to the core. The script is witty, sharp and shrewd, capturing the way people can be self-interested even when not meaning to.
Mankiewicz has the patience to let the story tell itself. Rather than rush everything or worse, have everything explained to us, he allows the dialogue to carry the film and give us an insight into the characters. He trusts that we will be able to keep up with the story.
He also has a great ear for dialogue and attention to how intelligent people speak. During a verbal fight that seduced playwright Lloyd Richards (Hugh Marlowe) and Margo have over Eve and even after he leaves, Margo continues to use the phrase "fire and music", which Lloyd used to describe what Eve had done. I find it's human nature to repeat certain words and phrases that get at people, and here, Mankiewicz makes the dialogue both intelligent and realistic.

Take, for example, the opening. We hear the cynicism of Addison and the sincerity of Karen not just by what they say but in how they say it, their voices and choice of words mirroring their personalities.
Mankiewicz also directs the actors to say so much with just their reactions. All the praise being heaped on Eve is counter-set by the reactions of DeWitt, Margo's beau/director Bill Simpson (Gary Merrill), Karen and Lloyd. Here, we quickly establish that it's not what others might think about Eve that is the truth, but what this particular group knows and says about her. There are brilliant bits of dialogue throughout the film, such as when Margo confesses (albeit a bit drunkenly) about her fears on turning 40, or the fight between Margo and Lloyd, or when Margo discusses (soberly) what it's like to be a woman with a career, between the persona of Margo Channing and the person who is Margo Channing. 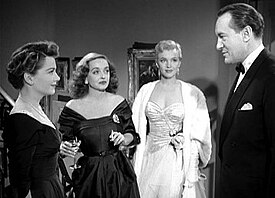 The meatiest dialogue goes to Addison DeWitt. His name alone explains what kind of person he is: a sharp man who is far too smart for himself and those around him. Few people have been so gleefully malicious and snide, contemptuous of people and also understanding of how people's need for applause or love can make them do all sorts of terrible things to others. He also is cynical of almost everything and everyone. When his protégé Miss Casswell (Marilyn Monroe in one of her earliest roles) bombs the audition, he encourages her to go into television. "Do they have auditions in television?" she asks. "That's all television is. Nothing but auditions", he tells her.
If you listen to all the characters speak, you find that they all have something clever to say about each other, or themselves, or their various situations. All About Eve has an incredible screenplay

Another aspect of All About Eve that sets it apart from most films is the acting. It's rare when you get one or two great performances in the same film, but here every performance from the headliners to the smaller roles are brilliant. George Sanders brings a vocal sneer to DeWitt, someone who has a great opinion of himself because he knows who he is and is entirely unapologetic about it. Marlowe makes Lloyd the perfect dupe in Eve's machinations, and Merrill brings a realistic approach to Bill Simpson as someone who isn't impressed or taken in by the subterfuge of the theater and its world but who sees it as a job like any other. 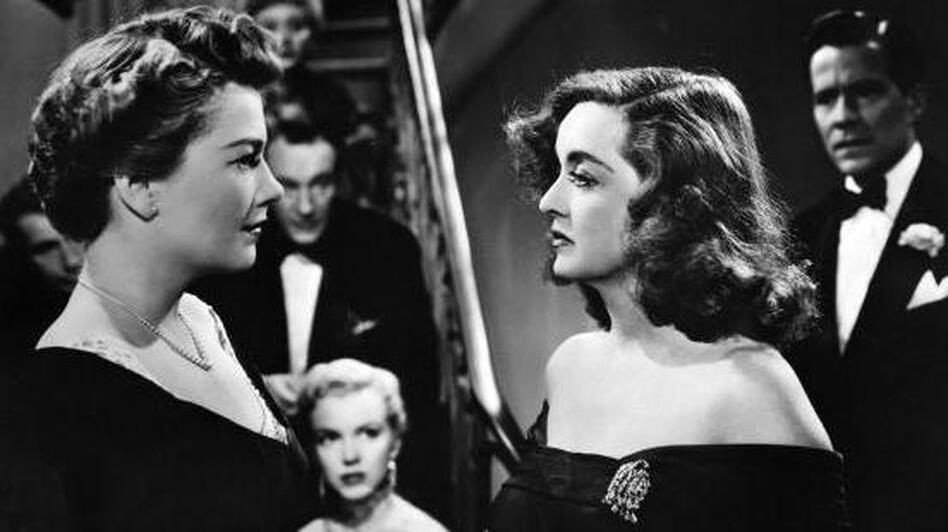 As the title implies, All About Eve is dominated by the fair sex. Karen could have come off as stupid or naïve, but Holm makes her a sincere friend to everyone she meets but one unafraid to tell people what she thinks. Even she, however, is not above a touch of cynicism, as when she assures Eve that she'll get Lloyd and Bill to let her be Margo's understudy by telling her, "They'll do as they're told".

Baxter's Eve makes her metamorphosis from sincere, sweet, kind, girl to one of the great screen villains. She holds the audience in wait, making us wonder who Eve really is, perhaps even up to the end of the film. In her surface kindness that hides a heart of mud, Baxter holds our attention, devouring anyone who stands in her way until she meets her match in DeWitt, nobody's fool.  It's a truly pitch-perfect performance.

The highlight, however, has to be Bette Davis as Margo Channing. One can make a case that Davis was playing a version of herself: the temperamental yet vulnerable actress who fears she might lose everything and have nothing left except a book full of clippings. However, she embodies this well-written character and make her real. We know Margo as a woman who loves being an actress, who loves Bill, but who while knowing she is a great star and great actress is still a woman who wants a man she fears may leave, especially now that she's hit a critical age of 40. Her discussion about this to Lloyd is a remarkable dramatic turn, one where Davis lets her guard down and has us totally sympathize with a person as opposed to the persona she may come off as. Margo Channing, however, is no wimp. She knows how to take it, and when she says good-bye to Eve it's one of the finest kiss-offs in film. 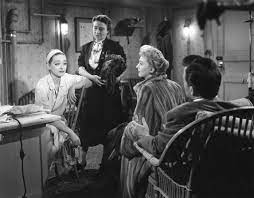 There are a few odd bits in All About Eve. For example, there's Thelma Ritter's Birdie Coonan. There is nothing wrong with her performance, but curiously she disappears completely after Bill's birthday party with no explanation for her departure. There is also the scene where Addison and Eve leave the Shubert Theater in New Haven, which is obviously fake. The latter is a minor detail, a bit of 50's filmmaking, while the former is something not so easily dismissed.

At the end of All About Eve, we get the sense that Eve may eventually get what she deserves, but we also get the sense that Mankiewicz is making a commentary about celebrity. Margo, for whatever her faults, is both an actual actress and a genuine person, someone who while at times difficult can always be counted to be professional where it's important and who knows it's her job to be good. Eve, on the other hand, appears to want a theatrical career for the applause serving as a substitute for love. She wants to be a star but has the talent to back it up.
As for the minor but important character of Phoebe, it appears that fame for fame's sake is something that didn't originate with reality television and YouTube.

1951 Best Picture: An American In Paris