The Song of Bernadette: A Review

THE SONG OF BERNADETTE

The faithful now flock to Lourdes, France in the hopes of finding cures for various physical ailments, but how did it all begin? The Song of Bernadette tells the story of the young girl whose Marion visions created controversy and religious fervor in equal measure. A moving, respectful portrait of a young girl's faith, The Song of Bernadette inspires even the strongest nonbeliever.
Young French peasant girl Bernadette Soubinous (Jennifer Jones) sees "A Lady" in a grotto one day while waiting for her sister and a friend. The Lady, visible only to Bernadette, appears to also bring good fortune to the Soubinous family. Soon, other villagers go to the grotto, inspired by Bernadette's visions.
As her visions continue and crowds continue to grow, both government officials and the Church become worried that her visions will make her village the laughingstock of France or worse. Intense pressure is place on her to recant her story, especially by the Imperial Prosecutor (Vincent Price), but she cannot deny what she sees. Eventually, The Lady reveals her name to Bernadette. She says she doesn't understand what The Lady called herself, but repeats it: The Lady says she's The Immaculate Conception.

Ultimately, despite many hardships and physical ailments, Bernadette keeps to her faith, altering the lives and faiths of millions forever. By the end of The Song of Bernadette, Miss Soubinous has joined a convent but slowly succumbs to tuberculosis of the leg, beginning her own journey to meet her God

The Song of Bernadette is extraordinarily beautiful and respectful of the story of the town of Lourdes and the visions of this young girl. It is remarkably balanced, never once taking sides on the reality or falseness of Bernadette's visions. The doubters, primarily the government and Church, are not held out to be villains but are given reason and logic to repute the stories. In fact, one of the best points about the movie is that even though people like the Imperial Prosecutor are doubters, they are not presented as evil but as grounded in reality and thus incapable of taking anything on faith.

Near the middle of the film, Bernadette starts eating plants straight from the ground, then starts digging a hole and taking in the dirt as if it were water. The townspeople who've been following her think she has gone mad to the delight of the town officials. She is shuffled out of the area, and it becomes an emotional rollercoaster as by now you firmly believe that Bernadette believes.
If you have a cursory knowledge about Lourdes, you know the result. However, the tension that builds as one man refuses to give up hope builds and builds until it comes to a beautiful fruition.

For myself, the most powerful moment comes a little later on. A family we've met earlier with a sickly child is told he is within hours of death. The mother will not believe this, and carries her son out of the house and runs straight to the grotto which now has water that has sprung out of nowhere. She places her child in the water as a devoted act of faith. I confess I was surprised at my reaction to this scene: I got a lump in my throat and some tears began to form.
The Song of Bernadette allows for gentle moments of comedy, such as when local officials refuse to reopen the grotto until a well-born lady, arrested along with the peasants, pays the one-franc fine and coolly informs them she's the governess of the Imperial Family. She has come by command of the Empress herself, embarrassing the village officials. 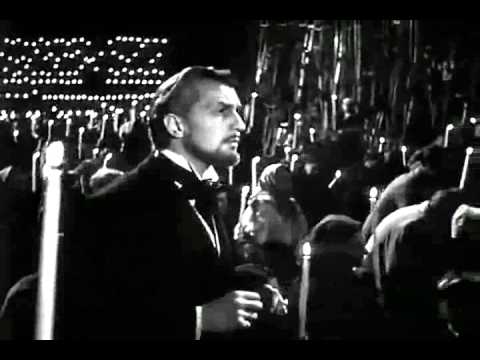 The Song of Bernadette is filled with beautiful, haunting moments, elevated by fine acting, a credit to director Henry King. Vincent Price, primarily known for his villains, shows a greater depth as The Imperial Prosecutor. His final scene is deeply moving. Returning from an informal five-year exile, he wanders through the silent throng of believers, and in voiceover Price delivers a gentle but passionate soliloquy about how even as he knows he is dying, he cannot bring himself to believe, only to fall to his knees, asking softly out loud to Bernadette, the girl he persecuted, to pray for him. It is difficult to impossible not to become emotional at this scene, a hard man breaking to fear and hope.

Jones' performance is sublime. Her Bernadette is beautiful, one who is honest, simple, and pure. She is guileless, incapable of lying or denying what she sees and hears. Her story never changes, no matter how many times she's asked about it or how much pressure is placed on her from her family, friends, Church or State to do so. Bernadette never claims to have seen The Virgin Mary, only a beautiful Lady.
Jones invokes the grace and quiet strength of Bernadette, and that is what makes her performance all the more extraordinary and brilliant. Jones portrays Bernadette not as holy or aware of her importance to others, but instead as graceful, and that is what makes us love Bernadette: not her visions, but her true heart and noble character.
The Song of Bernadette is also highlighted by Alfred Newman's Oscar-winning score, a rich and haunting one that lends to the spirituality and reverence of the subject matter.

We can trifle over little flaws in historic accuracy or its two-and-a-half hour length, but on the whole The Song of Bernadette is a quiet, beautiful film about a gentle girl and the power of faith.
As I saw the film, I was reminded of the words of Christ, who said to the woman who touched his garment, "Your faith has made you well" (Mark 5:34). I also thought of 1 Corinthians 1:27 where Paul states, "But God chose the foolish things of the world to shame the wise; God chose the weak things of the world to shame the strong". Bernadette had little education, let alone comprehension of such concepts of the Holy Trinity or the Immaculate Conception, but her quiet strength and dignity metaphorically overthrew the powerful forces against her.