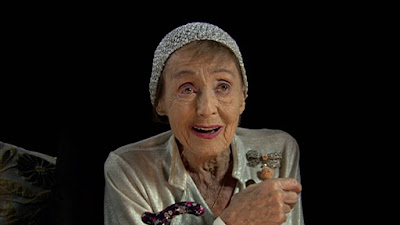 Today is a very noteworthy event in film/Oscar history. Luise Rainer, the first person to win consecutive Oscars for 1936's The Great Ziegfeld and 1937's The Good Earth, celebrates her 100th birthday. Born January 12, 1910 she now is the oldest living Oscar winner as of this writing. Turner Classic Movies was running her movies and as I knew she was 99,  I wondered one of two things: either she died or she celebrates her centenary. I'm happy for her it's the latter.

I've had my issues with Miss Rainer. I haven't seen her performance in The Good Earth (though the idea of a German playing a Chinese peasant still boggles the imagination) but did see her in The Great Ziegfeld. I thought her performance was "fluttery": very mannered and exaggerated, though I did think she was quite pretty as Anna Held, Florence Ziegfeld's first wife & star of his Follies. I question whether she should have won Best Actress for The Great Ziegfeld, especially for a relatively brief performance.
In retrospect, I don't think this performance or win has held up well, but that's for another time. This is not the time to go after an old woman who's reached a milestone few people have achieved: both for living a century and winning two Oscars. Given she's a back-to-back winner, that puts her in a class all to herself. Only she, Spencer Tracy, Jason Robards, and Tom Hanks as of today have won their only Academy Awards in the same way.*


Curiously, she lost out her chance to appear in a genuine masterpiece when she was set to make a cameo in La Dolce Vita but withdrew before shooting her scene (she does appear briefly in a 'making-of' documentary as part of the special features on the DVD). 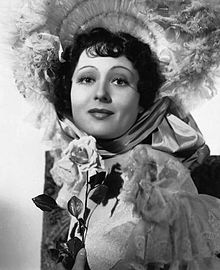 When she does pass, we will have lost a piece of cinema history. Those in the ranks of actors from the "Golden Age" are a dwindling lot. As of today I can think of a few: feuding sisters Joan Fontaine & Olivia de Havilland, Lauren Bacall, Doris Day, Kirk Douglas, Shirley Temple, Elizabeth Taylor. Soon, all will enter history, but while we have the films will modern audiences still go to their films?
They aren't going to Rainer's. In fact, if she's remembered today (outside of her birthday commemoration) it's only because she won the two consecutive Oscars. It might be unfair, but I use Miss Rainer as an example to any "star" working today: you may be big, big, big, but you can as quickly be forgotten by the general public. Fame is a by-product of your work, not the end result.

Still, this is a time for celebration. Rick's Café Texan wishes a very Happy Birthday to Luise Rainer and congratulates her on celebrating 100 Years of Life. I hope they have been overall good and happy years and offers all the best for however long she has life.

*Katherine Hepburn also won back-to-back Oscars (1967's Guess Who's Coming to Dinner and 1968's The Lion in Winter) but the second one was in a tie with Barbra Streisand (Funny Girl). Miss Hepburn had already won one Oscar before and would win another after. Miss Rainer won outright both times she received the Oscar.
Posted by Rick at 10:44 PM