What Happens When You Mix Green & Blue?

The way some Avatar fans talked about the film, you'd think it was one of cinema's great turning points. It was hailed as to the film that was to be to science-fiction films what Citizen Kane was to cinema itself. Decades in the making, is Avatar worthy of both the wait and praise? In certain respects, yes, but perhaps the adulation bears closer examination.
Paralyzed Marine Jake Sully (Sam Worthington) has been chosen to replace his twin brother on Pandora, a distant planet that contains the rare and valuable mineral found here: unobtanium. He is part of a plan to infiltrate the indigenous population called the Na'vi and learn their ways. Humans cannot breathe the Pandoran air, necessitating avatars: a human/Na'vi hybrid controlled by the individual's mind that will allow humans access to Pandora.

Assigned to protect Dr. Grace Augustine (Sigourney Weaver), they're attacked by a native animal; Sully gets separated and encounters Neytiri (Zoe Saldana) a Na'vi woman. He soon becomes part of their tribe, which delights the military/industrial complex. The evil corporate head Parker Selfridge (Giovanni Rivisi) sees a great opportunity in Jake, whom he hopes will be a spy for them to crush and exterminate the Na'vi.
As Jake spends more and more time with the Na'vi, his alliance and sympathies start shifting to them, culminating in him and Neytiri falling in love. Not wanting to wait anymore for Jake to either negotiate and suspecting his motives, the military/industrial complex decides to move in, leading to an epic battle for control of Pandora. 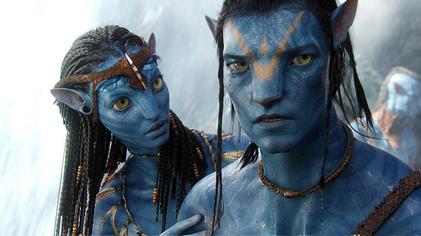 It's curious that what Robert Zemeckis cannot do with motion-capture, James Cameron can. My theory is that the former wants it to look realistic while the latter wants it to look fantastical. Cameron sees stop-motion as a way to create worlds, Zemeckis as a way to recreate worlds.
Cameron has done an incredible job creating Pandora, this extraordinary visual world which audiences are fully immersed in. There are incredible images of sheer beauty on Pandora, and they are created so well you don't really question them as being anything other than realistic. The visuals alone are worth the cost of admission.
Having said that, I had major problems with the story. The first big problem was that this story isn't very original. As I watched, I kept flashing back to primarily Dances With Wolves (Dances With Na'vi?), though I also saw elements of Braveheart and at one point, The Ten Commandments. You see the overall script and think that otherworldly universe aside, Avatar is really a collection of past films merely set in another world
Even in the case of the Na'vi, the stereotype of the native population as being ethereal, spiritual, at one with Nature & The Universe can't or won't be shaken. The Na'vi are all mystical enlightenment as opposed to the military/industrial complex about to ravage their homeland. If one found the indoctrination from Captain Planet a bit on the obvious side, Avatar does them one better.

While that can be expected, other bits may come as a shock. Near the end of the film, as the Na'vi and their human associates prepare for the onslaught from the military/industrial complex, Trudy Chacon (Michelle Rodriguez) comments something along the lines of how she wishes her mission wouldn't involve "martyrdom". At the very least Cameron is completely oblivious to how loaded this word and phrasing sound. While I didn't gasp I was surprised. Right after that, Colonel Quaritch (Stephen Lang) is rallying his troops for the final assault, he uses the phrase "preemptive strike" (which is rather ridiculous since they've already invaded Pandora so the Na'vi know they're there) and then tells them, "We will fight terror with terror".

The attempts at parallels between Pandora and Earth are a bit heavy-handed. One gets the sense that Cameron is attempting to draw comparisons between the invasion of Pandora and Iraq, which I think may either age poorly or hopefully be forgotten.

There's a shocking lack of originality among the visual splendor. The Na'vi seems shorthand for "native". Unobtanium is close to "unobtainable". Parker Selfridge could be read as "Selfish".  Leaving aside for the moment the film as a whole, one would have hoped Cameron would have created more original terms. The acting is also an issue. There's a push to make Sam Worthington a major star, but after the frightful Terminator: Salvation and this we see Worthington is wooden, incapable of demonstrating human emotion. I'm beginning to wonder if he's more an Action Star than an Actor since his roles tend to be the same. Even that could be forgiven if not for the fact that he isn't compelling as an Action Star to begin with.
I noticed that his native Australian accent was more pronounced here than in Salvation. I admit to taking it for granted that he was playing an American since all his cast-mates speak with American accents, but I thought it was odd to hear Sully sound as if he were more New South Wales than New England.

Particularly bad was Giovanni Ribisi as Parker Selfridge. He plays the evil industrialist with no variety at all, a mustache to twirl short and so cartoonishly over-the-top. Out of the whole cast, Sigourney Weaver saves herself because she is a first-rate actress who can play just about anything with great deal of conviction.

I don't take away from Avatar's extraordinary achievements in visuals, in taking us into a world that has no limits except one that an imagination will impose. I do wish that the story itself weren't so loaded with Environmental Movement cheerleading. Perhaps Avatar is a harbinger of things to come. That I welcome gladly.

Avatar is a visually splendid but surprisingly empty film. It's there to enjoy at the spectacle of it all, but not so much the story itself.