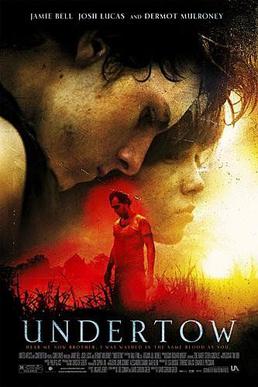 I've heard the phrase "Southern Gothic" but have never quite understood what it meant. I have a feeling Undertow is as close to mixing what I know to be a Gothic story (dark, violent, elements of the supernatural), within the setting of the American South. While it did not work for me, I appreciated the effort Undertow made.

Rudderless teen Chris (Jamie Bell) is filled with anger about his life situation. He lives with his brother Tim (Devon Alan) and his father John (Dermot Mulroney) in what I can describe as somewhere east of Deliverance. They moved there after John's wife Audrey died. Each cope with the situation in a different way: John by shutting down emotionally, Chris by being a bit of an Artful Dodger, and Tim by not eating regular food but going for mud.
There is actual mud-eating in Undertow.
Chris can't stay out of trouble with the law and appears to be more like his uncle Deel (Josh Lucas) who comes to their home shortly after leaving prison. At the risk of giving a spoiler, there is a reason why Chris is more like his uncle than his father.
It's clear from the onset that Deel is a bad influence. He is not there to really get his life back on track. Deel & John's father had a collection of gold Mexican coins which he got from a mysterious ferryman many years ago. Deel now wants the coins or at least his share.
John believes the coins are cursed and refuses to hand them over to anyone. One day while John is away, Deel goes on a frantic hunt for them, finding them behind a portrait of John & his family. John finds him and all the years of resentment between them finally come to a head. Audrey, it seems, had been Deel's girl before cheating on him with John. The Cain and Abel battle reaches a shocking conclusion; with his nephews as the only witnesses, Chris and Tim now must fight to survive, forcing them to go on the run.

One gets the sense while watching Undertow that director/cowriter David Gordon Green was going for something far grander than his abilities were able to pull off. What was attempted was a meditation on the nature of greed. What the result ended up being was a familiar story with a hillbilly accent. If he hadn't been too fond of unnecessary artistic touches (such as freeze-frames that added nothing to the plot) or just plain weird elements (as in Alan eating mud or Bell sucking a pig's tit) he would have had a better film.

The performances raise the enterprise considerably. Bell is desperate to be considered an actor versus merely "Billy Elliot", and he did a masterful job in having an extremely convincing American Southern accent. He was able to match Lucas' impressive turn as the bad-seed Deel. In another person's hands Deel could have become a parody of a hick ex-con, but Lucas creates both a person and the embodiment of an angry, soulless, dangerous man who will kill anyone to get what he wants.

Even some of the smaller parts are done well. Though she appears only briefly, Shiri Appleby as a homeless girl gave a memorable performance. I even marveled at Kristen Stewart as Chris' love interest, though her limited screen time makes it difficult to gauge if she is as limited an actress as her work in the Twilight series make her out to be.
Undertow got a major boost from Phillip Glass's score. I imagine he had some fun writing music for the banjo. I am still amazed that Glass is part of the film. However, while the film is well-acted there really isn't much in Undertow as a film. Though it's only about 90+ minutes it felt far, far longer. In spite of the Southern setting, it came close to being a parody of the South. Undertow even came complete with Deliverance-type men to where I wonder why they didn't comment on Lucas' pretty mouth.
The plot point of the "cursed" coins was unnecessary, as if they were trying for some sort of symbolism that didn't pan out. Neither did questions about Chris' identity. And frankly yes, the eating of mud and the sucking of a pig's tit is not something people should be clamoring to see. Finally, not one but twice do we have characters making rather miraculous reappearances. That is just plain cheating.

Ultimately, Undertow has some very good performances but there really isn't enough to make it as great a film as it thought it could be. I can't call it a disappointment but if only it had not been as artsy as it was trying to be Undertow could have been so much better.
Still, I suppose it's better to literally suck on a pig than be forced to squeal like one.