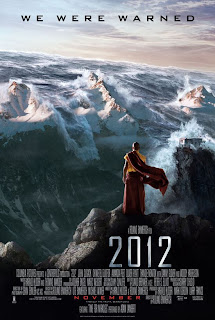 One has to admire the lunacy of 2012. As a film, it's slightly worse than most recent disaster flicks. As an experience, it's endlessly fascinating to see so many people throw themselves with impassioned abandon to something so endlessly trashy. The basis for 2012 comes from an interpretation of the Mayan calendar, which states that this era of time will end near Christmas 2012 and a new age will begin. Not wasting a time to cash in on paranoia, 2012 ends up only making a fool out of everyone involved.

Scientists have discovered that the Earth is starting to react to solar bursts, causing the temperature of the Earth's core to rise dramatically. Informed of this, the President (Danny Glover) and other world leaders start making plans to preserve humanity. By the time these events come around, we get to the story of Jackson Curtis (John Cusack), semi-successful novelist and chauffeur to a Russian billionaire. He gets to take his kids from his ex-wife (Amanda Peet) and her successful plastic surgeon husband, Gordon (Tom McCarthy). Going to Yellowstone National Park, they find their favorite lake both restricted and oddly empty of water. Curtis meets radio talk show host Charlie Frost (Woody Harrelson), who tells him and his radio audience that the world that the government knows the Earth is going to collapse.

Soon, the world goes through cataclysm: Yellowstone explodes in volcanic fury, Los Angeles collapses in a massive earthquake. The Curtis family and Gordon escape to Las Vegas, where Jackson's employer has a plane that will allow them to go to the secret project: a collection of arks deep in the Himalayas. From here, it's a race to see who will survive the Mother of All Apocalypses. Normally, one can and should forgive or at least not be too picky about something as schlocky as 2012. However, even for something so daft the film almost goes out of its way to be idiotic. Convenient characters and situations pop up so often you'd think screenwriters Harald Kloser and director Roland Emmerich decided to almost make a spoof. The main scientist (Chiwetel Ejiofor) recognizes Jackson and is a fan of his work. Jackson's employer is also in Las Vegas when they arrive and can provides them all a way out. The Russian's mistress has had plastic surgery performed by Gordon. A Buddhist monk and a worker on the arks encounter the Curtis/Russian party in the Himalayas.
What are the odds that so much would happen at the most opportune time? How very convenient.
While it might be too much to ask for logic in a disaster film, at certain points you say, 'this is really dumb'. If it's 2012, I figure President Thomas Wilson has won re-election, since that is a Presidential election year. If he hadn't, I figure there would have been consultations with the next Administration. Yes, I might be overthinking this, but it's not something that makes sense.
We also have to wonder, just how many times can a group escape massive disasters virtually unscathed? The Curtis group escapes not once, not twice, but at least three to four times: Los Angeles, Yellowstone, Las Vegas, the Himalayas, and all before getting to the arks. The more they managed to escape intense earthquakes and volcanic explosions, the more you wonder, "How does one outrun a gigantic cloud of smoke and ash in a small plane?" "How do you survive a crash in the Himalayas without more than a thin coat?" "How can you outrun an earthquake in a limo when said earthquake appears to be going at more than sixty to seventy miles per second?".

What would be nice would be that the characters not be "characters". Harrelson's radio talk show host is a cliché (crazy, conspiratorial minded). Wouldn't it be a change of pace to see instead a rational person who has solid proof to these plans? Still, we don't need to worry about logic; we go to 2012 to see things explode and the world collapse.

However, it's insane to think that the world would have such radical shifts in hours. Forget all that you learned about plate tectonics; the continents shift so quickly there isn't time to breathe. Still, when you look at other films such as Poseidon, Deep Impact, Armageddon, Independence Day, The Day After Tomorrow, or Twister, (of which most weren't that good either), one couldn't help think of them and think it's just another bad disaster film. 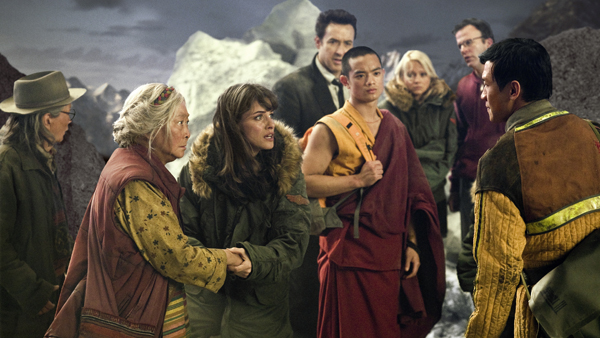 Having said all that, I couldn't help admire the performances. No, they weren't good, but good actors like Cusack and Oliver Platt (the Chief of Staff who somehow becomes Head of State) are so COMMITTED to make this a good film that they in whole have you marveling at what they're up to. They seem so DETERMINED to the project, to make you believe that 2012 is worth your time, that part of you wants to cheer them on as they plunge further and further into this trash.

I digress to point another odd point of logic: the President elects to stay behind in the White House instead of being flown to safety. The Vice President is dead and the Speaker of the House is missing. With that, Platt's Carl Anhauser elects himself the new leader of the free world. Isn't the next in line the Secretary of State? Well, again, throw out logic: we want to see things destroyed.

2012 tries to add human elements to the story, like that of the scientist and his father, who is part of a musical duo on a cruise ship (memories of Poseidon quickly come to mind), and that of the President and First Daughter (Independence Day) and most bizarrely, the murder of the head of the Louvre who is going to reveal why great art is being replaced (The Da Vinci Code). None of that ever makes the film rise above a silly, hurried, and curiously unexciting project.
The visual effects weren't that overwhelming, the doomsday scenario slightly laughable, and worse, the reunion of the Curtis family at the end was forced and slightly ugly. What I want to know is, if Africa survived the cataclysm, why didn't the scientists know this and just send people there?

As it stands, 2012 is indistinguishable from other disaster films, some better, a few worse. In a bizarre way, the actors overselling everything makes a gonzo watch, like an unhinged experiment to see who can try and save this disaster. One thing is certain: calling 2012 a disaster movie shows there is truth in advertising.