Did You Hear About the Morgans?: A Review (Review #30)

DID YOU HEAR ABOUT THE MORGANS?

While watching Did You Hear About the Morgans?, I heard two things: laughing audiences and the Green Acres theme song playing in my head. When the female lead goes on about how she couldn't relocate anywhere outside New York City, Eva Gabor going on about how she gets allergic smelling hay might as well been playing in the background.  I get the feeling that writer/director Mark Lawrence may actually have been inspired by the show to come up with the film's silly premise.

Meryl and Paul Morgan (Sarah Jessica Parker and Hugh Grant) have been separated for three years after Paul's one-night stand. After a reconciliation dinner they witness a murder. To protect them, they are sent by the Witness Protection Program to the the unchic Ray, Wyoming, where the culture clashes bright forth lots of laughs.
If you are a more forgiving person you know exactly what and how things will play out. I guess I'm not that forgiving, as Did You Hear About the Morgans? elicited nothing other than eye-rolling.

Grant hasn't changed his persona or performance manner apparently since Four Weddings and a Funeral. It's the exact same performance in a pretty similar role: befuddled WASP.  His halting delivery, his fumbling body movements, it's almost to where one wonders whether he can act or just decided to give up and play "Hugh Grant" and cash his checks.
I think it's clear that Parker took this as rehearsal for her next turn as Carrie Bradshaw: again, no different from her series. None. It was just Carrie in all but name. 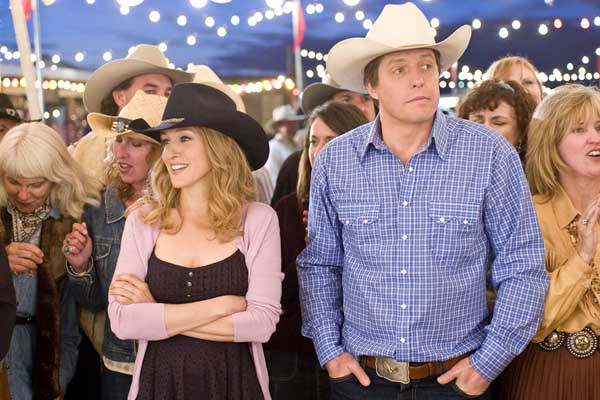 While a lot in the film can be forgiven, perhaps what makes Did You Hear About the Morgans? so bad is that the Morgans as a pair so horrible is their cluelessness and vapid narcissism. When they arrived in Wyoming, they are taken by the sheriff and his wife (Sam Elliot and Mary Steenburgen) to the Bargain Barn, the local version of Costco or Sam's Club. They are amazed to find people actually pay $9 for sweaters! Only $9! There are even such things as two-for-one specials inside this massive store! Honey, we've discovered a whole new galaxy.

For people whose life experiences have never taken them outside Connecticut, Republican meat-eating, John Wayne movie watching people who shoot guns and don't commit crimes is astonishing. It's beyond cliché, it's damn insulting to both the Morgans and the good folks in Ray. It's as if the screenplay came from a good sixty years ago. It makes one wonder just HOW something like this got a green-light.

Elliot and Steenburgen come off a lot better in the film even if their parts are small because they are more believable as actual people. Yes, there were a few funny moments (though I wonder if seeing Grant sprayed with bear repellent isn't a little sadistic) but not enough to get over the clunky nature of the story or the sad state of affairs with the main character's acting.
I found myself more intrigued with the story of the Morgan's assistants (Jesse Liebman and Elizabeth Moss) than in their employers and in Sheriff and Mrs. (Deputy) Wheeler than their charge.

In fact, my mind pursued a curious route. I thought about the possibilities of making a film about the assistants rather than the Morgans. I thought, how's this for a plot: throw out the murder angle (done to death--no pun intended). You make the sheriff and his wife actual cousins of Meryl, and she and Paul decide to rescue their marriage by going on a second honeymoon to their ranch. You have the culture clash and the romance without bothering with hitmen, as well as give them a legitimate excuse to be out of town. Or how about this: the Morgans leave under mysterious circumstances, leaving their assistants Adam & Jackie to deal with their various businesses. Can they do it? Do they fall in love in the process? Yes, maybe it ain't the most original of plots, but then again, neither is Did You Hear About The Morgans?

What you end up with are two people you never really like, in a situation you don't really believe, working on a film you really don't laugh a lot at. If you've heard about the Morgans, you've heard them all.