There are few times where my jaw literally dropped open while watching a film. One time when such a thing happened was while watching Akira, one of the most revered anime films ever made. The visual elements never drown out an incredible story, one that shows that when it comes to animation, the only limits are those the artists place on themselves.

Tokyo 1988: the city is obliterated in one massive explosion. Out of the remnants of this unexplained destruction in Neo-Tokyo thirty-one years later is a biker gang led by Kaneda with his second-in-command Tetsuo. Neo-Tokyo is a mix of a successful metropolis and a world on the verge of total collapse. There are elegant dining clubs mixed with mass street protests and riots on the streets and motorcycle gangs. While out battling their rivals, Kaneda and Tetsuo narrowly avoid running over the strangest being: a person that looks like a child but has an old person's face. The child, along with Tetsuo, are picked up by the military, having been led there by another old-looking child.

We discover these children are part of a nefarious series of experiments to tap into psychic powers to conquer. Tetsuo, we discover, has great powers and the military/scientific complex attempts to take advantage, but Tetsuo is becoming more unstable, allowing his rage and confusion to overwhelm his powers to destructive ends. As Kaneda joins forces with an underground movement to end these plans and rescue his friend, Tetsuo is terrified by manifestations of the three children in the forms of a teddy bear, a toy car and plush bunny. It now becomes a race to stop Tetsuo from becoming so out-of-control that Neo-Tokyo and the world itself be destroyed by tapping into the power of Akira, recreating the beginning of creation itself. 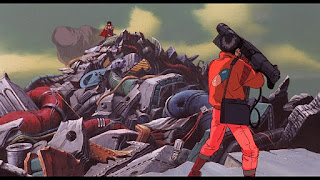 Akira has something up on most animated films that Western audiences aren't used to: an unflinching view of violence. While primarily Westerners think of animation as a children's genre, the Japanese style of animation known as anime like Akira can sometimes be more graphic than a live-action film. It is virtually impossible to imagine that a filmmaker would show a dog being shot point blank or have a character be crushed and let the blood go all over. In animation form the various acts of violence are more shocking.

You have a great ability to create worlds and images that perhaps could be accomplished with modern CGI, but that wouldn't have as strong an impact as an animated version has. The scene where Tetsuo has visions of attacking toys might not work in live-action, but in animation, accented with Shoji Yamashiro's score it is quite terrifying. When Akira finally makes his appearance was when my jaw dropped open and was stunned by at the brilliance of it all. It is to me one of the most shocking moments in animation, as if all reality within and without the film is melting into itself. For someone who may come into anime with visions of Pokémon or Hello Kitty, something like Akira will shock and astound.
What really pushes Akira to greatness is the visual style, the look of the film. In retrospect, Akira really does show how animation frees filmmakers to create fantastical worlds. Coupled with the exceptional story, Akira is an excellent albeit bloody way to introduce people to more adult anime.

Looking back on Akira, it seems to be a precursor to other films. It may have influenced such films as The Matrix and Children of Men, and appears to draw from 2001: A Space Odyssey. It presents a world that only appears real and one that is disintegrating beyond repair. It may not be possible to call Akira the Citizen Kane of anime, but it certainly is one of the seminal films of the genre, engrossing the viewer with a fantastical story that holds no limits.