Being undead is just no fun.
I've come to learn this through recent films like the Twilight series and Daybreakers. The vampire of today is one that is not only almost perpetually morose, but has no sense of style, no panache if you will. Why exist forever if all you're going to do is mope for time & eternity?
Our world has been taken over by vampires. Humans (and their blood) are dwindling, and now the vampires themselves are degenerating into "subsiders", bat-like creatures in body and mind. There are attempts to create a blood substitute at a major corporation (giving new meaning to "bloodsucking companies"), headed by Charles Brombly (Sam Neill). He puts this project in the hands of Mr. Edward Dalton (Ethan Hawke), but Dalton's non-beating heart is not in it.
Mr. Dalton doesn't drink human blood. He's sensitive to the human plight and hates being a vampire. Edward's brother Frank (Michael Dorman) has no such qualms. He loves to hunt down humans and a nice glass of sangria. One night Edward has a car accident and meets real humans. They are hiding and on the run from the majority population, but human Audrey (Claudia Karvan) senses Edward's different and may be able to help with a unique situation. 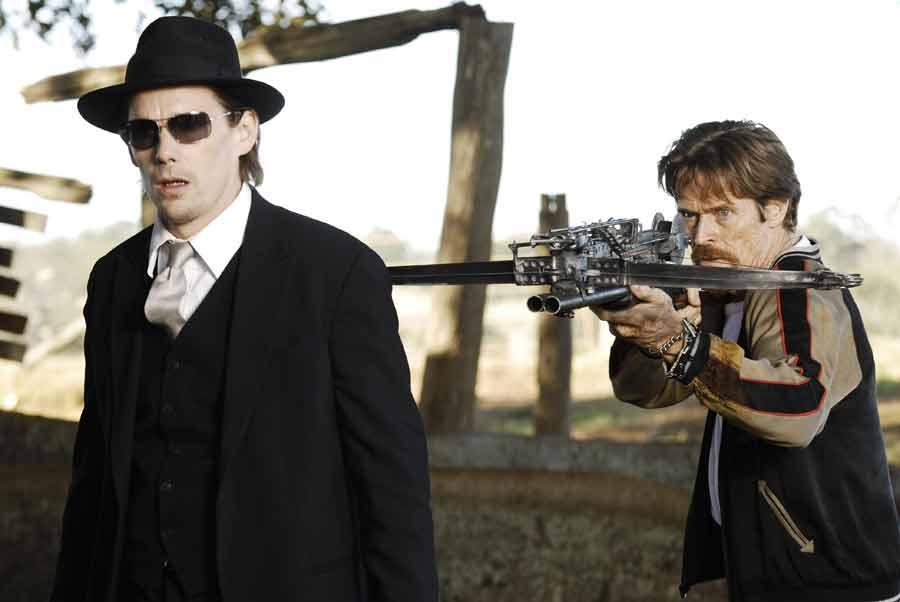 She clandestinely introduces Edward to Lionel "Elvis" Cormac (Willem Dafoe) who reveals a shocking surprise: he used to be a vampire, but is now fully human. Edward agrees or rather circumstances force him to go with them to try to reverse the effects of vampirism, and possibly stop others from becoming Subsiders. Edward discovers how to become human and potentially how to be human.

Daybreakers is written and directed by what is billed as the Spierig Brothers and already that had me worried. Not that I've heard of the Spierig Brothers or have an opinion pro/con on them, but that they chose to be billed that way. There's something slightly off-putting if not pompous about being billed as "The XYZ Brothers". The only time I've seen this was in the Satanically-awful Alien Vs. Predator: Requiem, where the creative team was billed as The Brothers Strause, as is THAT were to mean anything. Yet I digress.

Daybreakers suffers from an intense need to be profound. I am willing to accept the film's premise that vampires are now the dominant species on Earth, but must their world be so morose? Their world is so empty and downbeat. Not only is there no sunlight, but no color as well, and not just on their faces. The vampires that populate the world are so dour and humorless one wonders why they would want to continue. They saw a red door and painted it black.
In fact, their world is quite literally dark: all the interiors are in shades of black. I wonder, is that an after-effect of having the life sucked out of you? The Brothers Spierig suffer from the same idea that plagues many modern films: they confuse stillness with suspense.
I should know in my mind that this is not a copy of the perpetually Sullen Cullen from the Twilight series but to name a sensitive, morose vampire who doesn't want to hurt humans Edward couldn't have been a worse decision. It's almost spoof at this point.

As I watched, I kept thinking that this is like The Omega Man/I Am Legend in reverse: from the mutants point of view. Like in those films, the humans are outnumbered and being hunted by the monsters, but in Daybreakers, we see the world through the mutants' eyes. Pity the mutants had no emotions of any kind. The idea itself is interesting but the overall effect isn't. 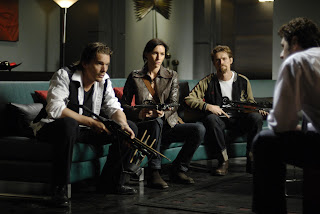 Daybreakers also introduces plot points that aren't followed up. For example, we learn that the first step from vampire to subsider is a change in the ear structure, and we see Edward with that type of ear. However, he doesn't suffer any other effects while others I gather change rapidly. Inconsistency I say.

The performances won't be long remembered because they were all one-note. One can say that Hawke, Neill, and Dorman should be lifeless on the screen because they were playing vampires, but the humans were oddly lifeless as well. Once Hawke becomes human himself through a controlled experiment, he remains joyless and solemn, a Sullen Dalton. I figured he would have marveled at being returned to life, but nothing. I digress to state I think Hawke looked better as a vampire than as a human.

There were no emotions from any of them beyond glum except for Dafoe. He acted as though he knew what life was like on both sides, but he also had this really crazy Southern accent that just sounded so funny. Neill I gather had gone to the same Vampire Acting School that Michael Sheen went to for New Moon since both were quite campy bordering on parody. A subplot involving him and his human daughter Alison (Isabel Lucas) was particularly ugly from beginning to end.

There is blood galore, and even exploding corpses (since vampires are not living, we can't quite call them bodies). I figure the Brothers Spierig wanted to give the audience its fair share of grotesque imagery. Still, if that's your line, you may find some things to your liking.
I also wasn't pleased with the ending. It veers extremely close to if not actually violating one of my Golden Rules of Film-Making: Never End Your Movie By Suggesting There Will Be A Sequel.

As it stands, Daybreakers has possibilities, ideas one would have hoped to build on, but they weren't pursued. Maybe it didn't want to. Maybe everyone involved just wanted to see heads cut off and humanoids being torn apart. If it merely wanted to be a bloodbath of brainlessness, Daybreakers may be mildly interesting though on the whole I found it a bloody failure.