Science-fiction films can be one of two things: an allegory of social issues or just wild & fun entertainment. They can be both, but if they're going to be one or the other, they should have the courage of their convictions and go for it. Independence Day goes for the latter in a big way, and it mostly succeeds.

Independence Day takes place over the course of three days: July 2-4. Day One has the approach of alien ships that hover over the major cities of the world, three in the United States: New York City, Washington, D.C., and Los Angeles. During the course of this day, we are introduced to a vast cavalcade of characters.

In NYC, we have Julius and David Levinson (Judd Hirsh and Jeff Goldblum), a Jewish widower and his son. Washington has President Whitmore (Bill Pullman), General Grey (Robert Loggia), the President's Communications Director Constance Spano (Margaret Colin), and the First Daughter (Mae Whitman). In the California section, there is Captain Steven Hiller (Will Smith), his girlfriend Jasmine (Vivica A. Fox), crop-dusting pilot (and ex-alien abductee) Russell Casse (Randy Quaid), and First Lady Marilyn Whitmore (Mary McDonnell).
All are living out their lives with varying degrees of success while these ships dominate the skies. Only David, an M.I.T. educated cable technician, realizes that the interruption of satellite signals worldwide is a countdown to an alien attack, but by the time he's able to inform the President, the aliens launch a massive attack, with all our characters barely escaping the onslaught with varying degrees of success.

Day Two has the counterattack by the humans which fails. The President is taken to Area 51 where they are met by Commander Major Mitchell (Adam Baldwin) and Dr. Okun (Brent Spiner). Capt. Hiller manages to capture one of the monsters and gets aid in taking him to the now-not-so-secret base with the help of Casse. In another part of the country, Jasmine discovers a badly injured First Lady and thinks Hiller is dead when going to his own base, which has been destroyed. The alien comes alive and declares through a captured Okun that there will be no peace.

Day Three has the final attack: a computer virus that David and Hiller will place inside the mother ship while on Area 51 there is a coordinated strategy that involves all the nations joining forces to defeat the extraterrestrial menace. Overall, Independence Day is extremely sprawling as it weaves vast storylines together. It does make them fit mostly well, though at times there were story elements that I found unnecessary. Having Casse's son be sick with a rare disease: a touch too much. Having Casse himself be a somewhat defeated drunk: also, a touch too much. I figure this was to give them character, but these elements felt tacked on.
I cannot say for sure if having a dying First Lady was meant as a slam on then-First Lady Hillary Clinton, though in 1996 she was not particularly popular. Yet, I digress.
The performances were also varied, sometimes for good and other times for ill. Hirsh's Levinson came off as Jackie Mason's befuddled cousin. All I can say for the interaction between Hirsh and everyone he shared the screen with is that a little Hebraic humor goes a long way. Spiner went all-in on the whacked-out Okun but in fairness his final scene was effective.
Pullman's Whitmore was remarkably stoic throughout the film. One got the sense he had the looks of a President but not the passion of one. His speech to the fliers before their final assault is not one for the ages. In fact, I found it one of the worst-delivered "inspirational" speeches ever given by a world leader. I know I'm in the minority on the Independence Day speech, for many people love it and think it's among the great bits of monologue in history (and can quote it verbatim).  For me, I wasn't overwhelmed, but there it is.

A curious side note: President Whitmore, an ex-Air Force pilot himself, would be the first President to personally lead troops into battle since Washington during the Whiskey Rebellion. Use that info any way you wish, but I digress. 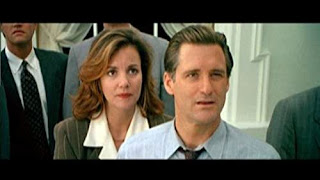 You also had two major love stories playing out: between Hiller and Jasmine and between David and Connie. Smith and Fox managed to weave their story well, bringing realistic performances of two people desperately in love.
Goldblum and Colin, on the other hand, played their love story in a quite detached manner. While the former said their lines as if they came from their hearts, the latter said their lines as if they came from their scripts. Smith in particular managed to be both an action star and a developing actor of depth in Independence Day, bringing his natural charm but also adding a sincerity and intelligence to the romantic aspects of the film.

There are fun parts to the film, such as how writers Dean Devlin & Roland Emmerich (producer and director respectively as well) tied in the Roswell Incident, or how Morse code came back in vogue, but again, too many coincidences clutter the film. Quaid being an ex-abductee, Pullman being an ex-Air Force pilot: while again I should not be harsh it seemed too much to believe. You also have a brief moment where we are made to realize we are all one, when Israeli pilots come face to face with Iraqi pilots as they prepare to attack the true common enemy. I like that optimism.

Still, that's being nit-picky. Independence Day has one goal: to bring entertaining action and arresting visual effects. It does that well, and it is extremely entertaining with the length not being too much to take in, although it could have been trimmed. It is a good film to be entertained by, pulling the emotional strings effectively and leaving you cheering for "our" victory over the invaders who would kill us all. Whether the "our" is humanity itself or Americans in particular is irrelevant...we won!
Independence Day delivers on its promise, and we do get fireworks. It is a pleasant diversion that works in entertaining the audience.