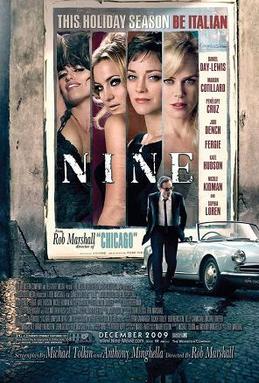 As I watched Nine, I wondered if it were possible to get anything out of it without having seen or heard of Federico Fellini's 8 1/2, on which Nine is based on. I think that a musical version of any project should stand on its own and be its own creation rather than imitation of its source. For example, My Fair Lady stands independent from Pygmalion, and one doesn't have to have read or seen Oliver Twist to get anything from Oliver!.
I don't know if Nine, however, can stand separate, at least judging from the film adaptation.

Guido Contini (Daniel Day-Lewis) is a brilliant Italian director who's facing a creative crisis: he doesn't know what his next movie, Italia, will be about. Bereft of ideas, he dodges reporter's questions, evades responsibilities to his crew and producers while trying to juggle his wife Luisa (Marion Cotillard) and mistress (Penelope Cruz). As he keeps trying to work himself up to work, his life starts floating into a series of big musical numbers revolving around the various women in his life: his wife, his mistress, his artistic muse (Nicole Kidman), his costume designer Lilli (Dame Judi Dench), an American reporter (Kate Hudson), his earliest sexual fantasy (Black Eyed Peas frontwoman Fergie), and his mother (Sophia Loren).
All of Guido's Girls float about him until he settles to make his next film, the genius finally back at work.

Just before yet another musical number, Day-Lewis' character asks Kidman's in his determined Italian accent, "Why is everyone suddenly interested in the script?" Pity no one asked director Rob Marshall that.

Marshall, who helmed the first musical in more than thirty years to win Best Picture (Chicago), plays the same parlor tricks with Nine, but he failed to recognize what I call The Rex Rule. Named after Rex Harrison, the rule is: You can try a particular or unique approach to film once. Attempting to repeat it will fail.
Rex Harrison could get away with starring in a musical film without actually singing in My Fair Lady. It helped that he originated the role on Broadway and that he was backed by the musical creative genius of Alan Jay Lerner and Frederick Loewe. When he tried to "talk in pitch" again in Doctor Doolittle, the results were an unhappy and excessive disaster with only Talk to the Animals being worth anything.

In the same way, Marshall was able to take a creative approach to a musical by, instead of integrating the songs into the story itself, they were all taking place inside the main character's mind. This worked in Chicago because the film never lost its focus on Roxie Hart with only two songs (All That Jazz and Nowadays) being performed in "reality". Also, it helps when you have the musical genius of John Kander and Fred Ebb behind you.

Marshall tried to do the same thing here, but it doesn't work because everyone gets to sing a song, and most of them are about Guido. When everyone sings songs almost exclusively about Guido (including Guido), it just comes off as narcissistic.

Each song is a literal showstopper in that the show literally has to stop in order to perform the song. The trick in a good musical or adaptation is to have the songs flow naturally into the dialogue, making it almost natural for characters to sing and dance. Conversely in Nine, all the songs are rammed in just to give each performer a chance to belt out a number.
Even that could be forgiven if the songs were brilliant, but it's highly unlikely that people will be singing songs like A Call From The Vatican or Cinema Italiano.  They're not terrible songs, merely not on the same level as something from the Lerner & Lowe or Rogers & Hammerstein songbook.

The actors all have surprisingly good voices but overall they can't carry the tunes to the heights they aspire to. Guido's Song (sung by Guido) made me smile due to Day-Lewis keeping totally in character with his valiant accent while doing aerobatics. There is something pleasurable in watching someone as artistically pretentious as Daniel Day-Lewis look so utterly and completely foolish. I admit to being taken by surprise when Dench went into a song-and-dance (Follies Bergères) but was much better than I would have imagined. While it is wonderful to see Sophia Loren again, she didn't have much to do in the film. To be fair though, Guarda La Luna (Look at the Moon) works well for her, a soft moment in the midst of overall exuberance.

That, I think, is what is at the heart of what's wrong with Nine: all the characters exist only to give one song, then they are free to leave. None of the many, many women in Guido's life add much if anything to the overall story of a creative man's lack of creativity or work ethic. One never likes Guido because he doesn't come off as talented, let alone this genius, just as a guy with too much time on his hands and too lazy/irresponsible to do anything except go after women.

Curiously, every woman that sings to/about Guido wants Guido except Lilli and Mamma. A better title to the film would have been Guido's Girls, since we don't touch on his writer's block but go into his sexual fantasies and proclivities.
In fact, listening to Hudson's lyrics about Contini's films in Cinema Italiano, I got the impression that a Contini film would be a shallow one, if all they could remember were "guys with skinny little ties and shades they wear at night". Contini himself comes off as shallow in the same song, when she keeps singing "Guido/Guido/Guido/Guido/Guido/Guido" (those are the actual lyrics).


Cotillard's English has improved since last we saw her in Public Enemies, and her first song (My Husband Makes Movies) was pleasant while her second (Take It All) was like an audition for Showgirls: The Musical.

Worse was Cruz, who looked as if she was in Showgirls. A Call From The Vatican was very whorish and it came off as an embarrassing stripper number. While it may fulfill many an erotic fantasy and be the cause of men performing auto-erotic exercises, it makes her look tawdry and cheap. When you had an actual song about a whore (Be Italian) sung by pop star Fergie, it crystallized what was wrong with this picture: a director more interested in the visual spectacle he was making rather than in an actual story.
Finally, I hated the ending: everyone coming together to watch Guido return to film-making and it being a "personal/intimate" film called...Nine!

The performances are above average but not remarkable. The songs have flash but no substance and aren't memorable. The visuals are interesting but not extraordinary. Nine, in short, doesn't add up to much. It does answer the question: What would Penelope Cruz be doing if she weren't in movies? She'd be a Las Vegas stripper.