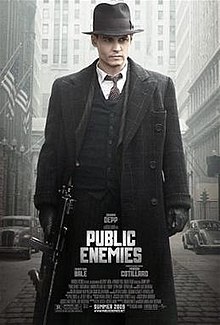 Perhaps rather than give a full review for Public Enemies, it would be more instructive to write the thoughts that came to me while I was watching it.

"Here's John Dillinger (Johnny Depp), acting rather slowly while breaking people out...I wonder who the guy who fell out of the car was".

"These Sweet Tarts are good".

"Is that Edith Piaf as Billie Frechette (Marion Cotillard)? I don't believe for one moment she has any Native American blood".

"Was that Diana Krall singing in the club? I only have one of her albums. When I Look Into Your Eyes I think it's called. It was OK".

"These Sweet Tarts are really good. I don't think I've had a bad one yet. Normally I can tell when I get a green one, but they are all good tonight".

"Is Baby Face Nelson the same guy who was Dane Cook's obnoxious buddy in Good Luck Chuck? Either he's a great actor or I'm still in a state of semi-consciousness".

"I'm running out of Sweet Tarts. Better save one for when Dillinger goes to the Biograph Theater".

"I didn't know The Lady in Red really wore orange. No, I think I heard that on the History Channel, or A & E".

"Manhattan Melodrama...looks like a good movie. I wonder if it's on DVD. William Powell, that's what I call an actor. Pity he never won an Oscar. He & Myrna Loy. Both got robbed. Come to think of it, I haven't seen any of the Thin Man movies. I should check them out. I don't think I've seen them together in any film. How awful. ".

"Clark Gable--a STAR if ever there was one. Pity most people here have NO idea who William Powell or Myrna Loy are. Some haven't even heard of Gable. How can you not have heard of Clark Gable? People can't be THAT dumb, can they?"

"No, I tell a lie. I did see Powell and Loy in The Great Ziegfeld, and he did have a small role in How to Marry A Millionaire. Class all the way".

"Why are going back to this movie? Put Manhattan Melodrama back on".

"OK, Dillinger's been killed. Time to pop in the last Sweet Tart".

"There's MORE?! Fine, fine, fine. Let's find out what happened to the girl."

"Oh, it WAS Diana Krall! I KNEW I was right. I would have thought Channing Tatum would have gotten a bigger role as Pretty Boy Floyd. Yes, he is pretty, but the jury's still out as to his acting skills. I can't tell him apart from the guys on Gossip Girl. Saw only one episode, didn't think there was any actual acting".

"I believe these were the BEST Sweet Tarts I've ever had, bar none". I was entirely flippant early on in my reviewing career, but in retrospect, I kinda liked how freewheeling I used to be. As I look at it, while Public Enemies tried to be in the style of early Warner Brothers' gangster films, it failed.
In short, Public Enemies is not a gangster movie in the style of a White Heat or The Public Enemy. It isn't even a good character study of Dillinger. He couldn't have been as boring as he's seen in the film. That's no reflection on Depp: he's one of the finest actor of his generation, period. It's the pacing. Public Enemies is so slow that it makes the movie drag. If people think it's a gangster film, forget it.

There are few action scenes to speak of. As for everyone else, I will give Cotillard credit for sounding somewhat like an American, same with Bale. However, Purvis doesn't come across as a diligent officer determined to bring Dillinger to justice. He, like Depp, are more like those animatronics at Disney World. In fact, the Cagney figure in Disney's Hollywood Studios' The Great Movie Ride is more lifelike than the actors on the screen.

Slow, slow, slow. It's unfortunate, since this could have been a great opportunity to remind modern audiences of the great genre gangster films were. Ultimately, by showing clips of Manhattan Melodrama during Public Enemies, we can compare & contrast just how good those movies were...and how bad this was is.

Slow, dull, with lifeless characters, Public Enemies will soon be forgotten, a blip in the careers of Depp, Cotillard, and Bale to where some of their fans won't even remember they were in this movie, let alone the movie itself.
DECISION: F
Posted by Rick at 3:39 PM