Michael Jackson's This Is It: A Review (Review #23) 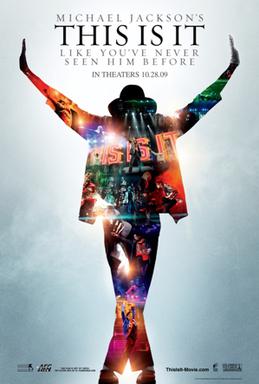 MICHAEL JACKSON'S THIS IS IT

You can remember Michael Jackson in many ways, depending on when you saw him first. Some remember him as the wildly talented youngster from the Jackson 5, singing and dancing like nobody's business. Others remember him as the man behind some of the most innovative music and videos of all time: lighting the ground with his feet in Billy Jean, a dancing zombie in Thriller, in the subway, telling the world who's Bad. For those who came after his heyday, he is known as "that crazy man who slept with boys and dangled a baby from a hotel balcony".
Michael Jackson's This Is It, the documentary film about his never-to-be comeback concert series, doesn't answer questions about Jackson the man. It does remind us of the man's extraordinary and exceptional musical talent and the catalog he left behind.

The film is a hybrid of documentary and concert film. The documentary part is supplemented by interviews with the dancers, band, and technical crew as they rehearse for the planned This Is It series of spectacular concerts. The concert part comes from Jackson's performances of his songs, where he excelled even when his audience consisted solely of no more than fifty. 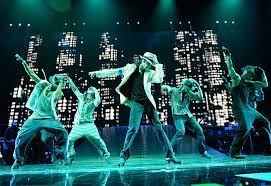 It may sound wrong, but I think This Is It looks better here than it would have looked if Jackson had lived to perform the entire show as planned. The concert would have to me been ostentatious and extravagant, but here, we can concentrate on the music and dancing that Jackson could still perform at age 50. We soon forget that this is rehearsal footage, not because of the quality of the footage. Instead, we get a chance to essentially sit in on a dress rehearsal, and as such concentrated on both the intense work of the planned show but more importantly the music.
We can hear how brilliant Jackson's catalog is with few if any distractions. Seeing him perform songs such as The Way You Make Me Feel, I Just Can't Stop Loving You, and Beat It, reminds one of the sheer talent Jackson had.

I was pleased to hear one of my personal favorites, Smooth Criminal. In this particular number he & director Kenny Ortega had planned, audiences would have had an amazing number that had Jackson be an audience member when Rita Hayworth performed Put the Blame on Mame in Gilda. Perhaps on a stage this would not have translated well. In This Is It, it works wonders.
To be fair, his Earth Song was to my mind both overblown and far too syrupy, but there it is.

This Is It is probably not the way Michael Jackson would have wanted to be seen as this footage was not intended for public view. However, that ironically ends up being one of its benefits: here we have Jackson, the singer, the dancer, stripped from all the weirdness and lunacy and tragedy that were as much part of his life as his enormous talent. We can judge the man as artist, not his eccentricities, his musical legacy, not his tabloid legacy. 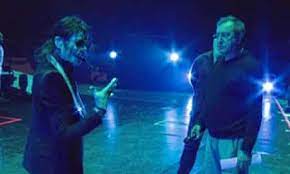 Is it exploitive? I don't think so. The people behind the camera were put in an extremely difficult position after Jackson's death, and they did the best they could under the circumstances. Director Ortega and company should be congratulated for being able to make a great musical experience out of behind-the-scenes footage, and the film is quite respectful of the man. The various interviews show that those working with Jackson thought exceptionally well of him.
This Is It does not dwell into the allegations of child abuse, and it is up to the individual if one wants to spend time watching a man accused of child molestation. Ultimately, This Is It won't change how people perceive Michael Jackson, the man. It might not even change how people perceive Michael Jackson, the artist. It never set out to be about Michael Jackson, person, but Michael Jackson, artist.
Stripped of the allegations, the bizarre antics and imagery of this person, we can see just how much talent he had, and if we judge him on that, his legacy is secure.