G.I. JOE: THE RISE OF COBRA

I start with a confession. I didn't watch the cartoon series of G.I. Joe and didn't play with the toys except for a Cobra Commander figure. I played with it so much that I ended up tearing it in half, but still kept playing with it for some time afterwards. After watching G.I. Joe: The Rise of Cobra, I am still amazed that today, it isn't television shows that are being made into films (I'd line up for a Mr. Belvedere film), but TOYS that are the inspiration for features.

Weapons manufacturer Mr. McCullen (Christopher Eccleston) has created a new weapon involving nanotechnology of some sort. Basically, these weapons eat everything in their path: tanks, buildings, people I imagine too. To transport these weapons, you have a military escort headed by Duke (Channing Tatum) and Ripcord (Marlon Wayans). They are attacked by a shadowy group but are rescued by another shadowy group. The latter are G.I. Joe, headed by General Hawk (Dennis Quaid). Duke & Ripcord join this elite squad to stop the other group, Cobra. One guess as to who is behind this nefarious SPECTER knock-off. You have the evil scientist, who is in league with Cobra to try to conquer the world. It ends up in a massive battle above the Artic Circle (bringing memories of Lara Croft: Tomb Raider to mind).

There were quite a few things wrong in this film. The biggest problem I had was with the flashbacks. There seemed an endless series of flashbacks to explain things (I counted four). In fact, the movie begins with a flashback. It takes you out of the film when you have to go back to explain things that are happening now or will happen in the near future. 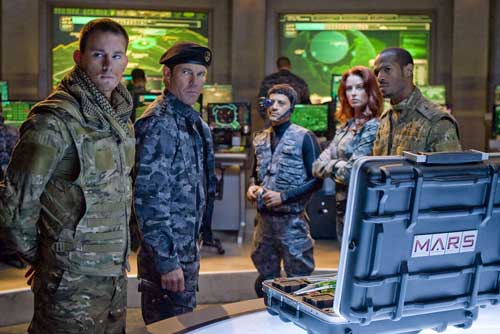 The flashbacks lead to the second, and bigger problem I had with G.I. Joe. There were too many coincidences in the film. One flashback explains why Duke and The Baroness (Sienna Miller) knew each other. Why did they need to? Why did they need to have a romantic history? Why couldn't she just be a villain to be a villain? Another flashback explains the animosity between Snake-Eyes and Storm Shadow. To be honest, it wasn't important to the story.
Why did they have to have a history, and what are the odds that they would meet again? Near the end, Storm Shadow says, "You took a vow of silence after our Master was killed", or something like that. While that explains why Snake-Eyes didn't speak, it was something we would have no knowledge of. That, to me, is cheating. I never gave a thought as to WHY Snake-Eyes was silent because I didn't care.

Then there is the matter of the performances themselves. Channing Tatum made Duke the strong, silent, stoic soldier. From what I saw, he has no real emotion, which might be correct for a military man but doesn't add much to Tatum's range. Wayans was all right as the comic relief but didn't add much to the story. As for the others, well, they range from the odd to the laughable. Joseph Gordon-Levitt must have had fun as the Mad Scientist, but frankly, Gordon-Levitt is simply too good an actor to waste his time on something as schlocky as Rise of Cobra.

Miller was a non-entity as The Baroness, and if keeps at this she won't convince people she's a genuine actress. It's their elders that should be embarrassed. Eccleston tried to ham it up, but couldn't bring himself to either play it straight or be in on the joke. As for Quaid, he just says his lines and cashes his paycheck. When he barks out, "Release the sharks", I bursted out laughing. In fact, I laughed a lot during the film, and I doubt I was suppose to.

It seems that there is one thing people watching the film have not taken note of: that G.I. Joe is no longer a Real American Hero. That's because he's no longer a Real American. It's now an international force, a steroid version of the United Nations. That's all well and good, but it isn't what the toys were about. When the film version of a toy series violates the spirit of the toys themselves, you're headed down a bad path.

Out of all the things wrong with G.I. Joe: The Rise of Cobra, the biggest problem was the ending. There was none. Instead, what the film ended up being was an extended trailer for the sequel. It violated one of my Golden Rules of Filmmaking: Never End A Movie By Suggesting There Will Be A Sequel. It won't make me want to figure what happens to them because I don't care.
I figure I should cut G.I. Joe: The Rise of Cobra a little slack, but even by the low bar it sets it fails. It fails as goofy entertainment, let alone intelligence.

Ultimately, G. I. Joe: The Rise of Cobra is made for kids who like to play with toys. Eccleston, Quaid and Gordon-Levitt are good actors, and deserve better. As for star Tatum, I don't know if this is a Step Up for his career, but if he keeps Fighting for scripts like this, he'll end up having to go back to stripping.