Personal Reflections on Gone With the Wind I had the great opportunity to watch Gone With the Wind on the big screen as part of the Plaza Classic Film Festival. The theater was nearly full, and I thought that it was interesting that a seventy-year-old film would have this much power over audiences who would never had seen it when it debuted.


However, as I watched it, the audience reaction had me wondering about how the film is seen by today's viewer, especially one who hasn't come across it. Certain thoughts came to me, and I've decided to share them.


The first surprise was the power of Clark Gable. You have an actor who has been dead for more than forty years, yet the audience erupted into applause when he first appears on-screen. Could it be because women still swoon over him and men still want to be like him? Gable exudes masculinity and adds wit to his persona. He could always be counted to be "the man's man", which appeals to us men.

To the women, it has to be his looks (ears and all), the sense that he could love them as no other man could, and that they would be safe in his arms, as Lynn Redgrave once observed. "You should be kissed, and often, and by someone who knows how," Gable as Rhett Butler scolds Vivien Leigh's Scarlett O'Hara. The women, I imagine, feel he certainly knows how. The second surprise came shortly after intermission. Tara had been overrun with Yankees, and here comes a Union straggler. In an act of justifiable homicide, Scarlett shoots him point-blank in the face. Again the audience spontaneously applauded. This really surprised me.

Yes, we are in Texas, but we're not THAT Southern as to still celebrate the killing of Yankees. It had to be more than that. I figured out that it was strictly audience identification. We now identified with Scarlett, to the point that some imagined themselves as Scarlett. That being the case, we couldn't allow our heroine (and by extension, ourselves) to be attacked or violated in any way. We had to fight for ourselves, and taking the deserter's life was the way to do it.
That showed to me the power of film, especially good ones. It is harder and harder to find films where we so completely identify with the characters on the screen. I don't know anyone who could relate to Gerard Butler in 300, Shia LeBeuof in Transformers, or Patrick Dempsey in Made of Honor. They are not only not real, they are so obviously not real.

Scarlett and Rhett on the other hand, may not be "real" in the sense that they don't exist, but are "real" in the sense that they could be, and therein lies the key. We get insight into their lives, their struggles, and we can identify with them. That is why we cheer when she commits murder: not because we think it's moral but because we believe that's what we could and should do if faced with similar circumstances.

This is the third surprise, and perhaps the most troubling. The audience laughed at the first appearance of Mammy, and had lots of laughs at Prissy.  OK, I confess to laughing at the infamous "I don't know nothing about birthing babies" bit.  I wish I could point to something specific: perhaps Butterfly McQueen's voice and hysterics, perhaps the idea of one of the world's first 'bitch-slaps', perhaps the somewhat overblown nature of it all.

Rather, I think the audience was laughing at the circumstances Mammy and Prissy were going into fits over. We have to remember that Mammy was yelling at Scarlett about not inviting the Tarlton twins over to supper (thus violating almost arcane standards of conduct) and it would be humorous to think a "servant" would be in a position to order someone about.

As for Prissy, Butterfly McQueen's voice did not help in taking her seriously, and she was at times silly. It's almost impossible not to laugh at her telling "Miss Scarlett", "I don't know nuthin' bout birthin' babies". 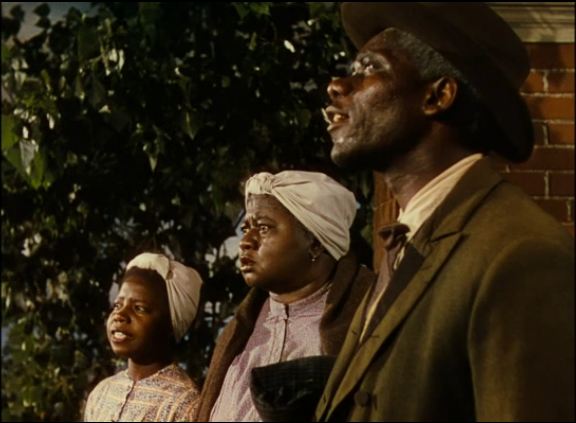 The fourth and final surprise, at least to me, was in how slavery itself was treated. This was the first time I really took note of the fact that Mammy (Hattie McDaniel), Prissy (Butterfly McQueen), and the male slave Pork (Oscar Polk) were never called "slaves", but "workers" or "servants", as dainty a euphemism as could be culled.

The harshest term used to refer to them to was "darkies", and while unpleasant, it is far better than the alternatives (ones that the book is full of). Gerald O'Hara at one point admonishes Scarlett that she must be firm with "inferiors" but gentle with them, especially "darkies".

That 'inferiors' thing does not sit well with me, and it adds to the myth of the "moonlight and magnolia" Old South as some marvelous fantasyland rather than one built on human misery. However, when one sees Gone With the Wind, one has to judge these things not by today's standards in the Age of Obama but by the standards of the times of both film and setting (1939 and 1865-66).


In those years, such language would not have been disturbing en masse. In reality, it would have been an improvement. In the opening, Mammy, Prissy, and Pork are not labeled the O'Hara "slaves", but their "servants". The distinction between the two worlds is an immense one, implying the three were almost there by choice. Still, I can't help but wonder when Pork asks "Miss Scarlett" who is going to milk the cow if he was hinting at something being left unspoken. "We is house...workers", he reminds her. I found that pause curious.

Could it be he couldn't bring himself to say "slave" but was sending a subliminal message to the black audiences about the truth of the situation? I have no way of knowing for certain. I can say that ultimately, the images of slavery in Gone With the Wind don't bother me only because I KNOW they are not real. For that, we have Roots: a far more accurate portrayal of the "peculiar institution".

I can't and don't endorse the film's imagery of slavery.  It is grotesque.  That being said, not only should we judge the film by the standards of the time but also understand that slavery is not the point of the film.  It's about the romance of a rather horrid woman and a misunderstood man.  Gone With the Wind is not history, but romance and fantasy.  As such, we should assess soberly the disingenuousness of how it portrays slavery without throwing out all the good things in it.  The film, while flawed in that respect, is miles ahead of something as truly vile as The Birth of a Nation.
Ultimately, Gone With the Wind will have a hold on audiences until the last copy disappears from history, and even then, the memory will still possess the imagination of romantics long after we've all passed from the scene. It is a Great Film, made with great care by craftsmen in front and behind the camera. Thus, it will be enjoyed by generations of film lovers.
Posted by Rick at 11:50 PM