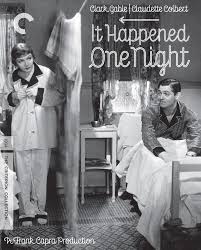 
It Should Happen Every Night...

Almost everyone who participated in It Happened One Night did not think this was a good film. Claudette Colbert said to a friend after production wrapped, "I just finished the worst picture in the world". Clark Gable was alleged to have been forced to make the film for Columbia Studios when he refused to make another one for his studio, M-G-M. When the Academy Award nominations were announced, few thought it had a chance. The film industry was therefore shocked when It Happened One Night not only won Best Picture, but became the first film to win "The Big Five" the same year: Picture, Actor, Actress, Director and Screenplay.

History has proved Colbert wrong: it was not 'the worst picture in the world', but rather a bright, sparkling romantic comedy that was the genesis for the screwball films like Bringing Up Baby or My Man Godfrey.

Spoiled heiress Ellie Andrews (Colbert) is desperate to escape and be reunited with the man with whom she eloped with. She does so by literally jumping ship, diving off her family yacht off the Florida coast. She boards a bus for New York where she meets down on his luck reporter Peter Warne (Gable).
At one stop, she is stunned to discover the bus left without her despite telling the bus driver to wait for her. Warne recognizes her and makes a deal: in exchange for helping her avoid her father's agents and get her back to New York, she will give him an exclusive to her story. Along the way, they have a few misadventures, culminating with a famous scene involving hitchhiking showing that Colbert had a "leg up" on the competition. As they are forced to share rooms, Warne has come up with the concept of "The Walls of Jericho" a blanket thrown between a piece of rope to divide the room. Knowing this is a romantic comedy, you can guess what happens to them as they go on their journey together.

Few people could tap into the "common touch" as well as Frank Capra. He had an instinct and talent for making films that were both good and popular. With 1934 being a Depression year, he allowed us to laugh at the rich, identify with the average Joe, and yet still find the humanity in the characters. We see their attitudes toward each other (and those in their position) soften over the journey. We have the theme of the star-crossed lovers, people we know should be together but for various reasons and misunderstanding aren't.

Gable gave great performances in such film as Gone With the Wind, Red Dust (and its remake Mogambo), and Mutiny on the Bounty among others. Here, in his only Oscar-winning role, he made Warne both a wise-guy and a romantic at heart. Colbert also showed the resilient, smart side to a woman detached from her fellow humans. These are two great performances that set the standard for all who followed in the romantic comedy genre.
While It Happened One Night is a comedy, we see Gable and Colbert give fully formed performances: the creeping romance, the moments of frustration and even drama.

Ultimately, you care about them and want them to be together. We cheer when "The Walls of Jericho" finally come tumbling down. A witty script, deft direction from Capra who keeps things moving and light and fun-filled performances from Gable and Colbert give us one of the first screwball comedies, a delightful romp that really should be better known.

It all just goes to show people have a lot of fun when It Happened One Night.

1935 Best Picture: Mutiny On the Bounty