It Makes Sense At Midnight...

I came into The Rocky Horror Picture Show as a complete innocent. I'd only heard about the film and its cult, but had never actually experienced either. Now that I've been Horrified so to speak, I can't say I was overwhelmed by my first time.

The Criminologist (Charles Grey) narrates the tale of Brad Majors (Barry Bostwick) and Janet Weiss (Susan Sarandon), two innocent kids who find themselves in the lunatic and decadent world of, well, freakish aliens from "Transsexual Transylvania" such as Riff-Raff (Tim O'Brien).
At the head of this merry group of hedonists is Dr. Frank N. Furter (Tim Curry), This Sweet Transvestite has created his perfect man, Rocky (Peter Hinwood). In the course of the film, the mad doctor seduces both Janet and Brad, traps the alien-hunting Dr. Scott (Jonathan Adams), and gets them to join in the oddest cabaret show. However, the wanton immorality of Furter's world cannot be, and there's a rather sad ending to all the camp wildness. 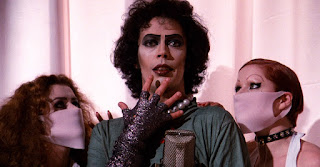 I figure The Rocky Horror Picture Show is meant as a spoof of horror films, musicals, and films in general. It is good to know that everyone participating was in on the joke. Can't say that I was. The movie has its own logic which I couldn't get. What happened to Frank N. Furter's court once the squares were I figure deflowered? How do you celebrate cannibalism? As stated earlier, the ending was rather sad, given how crazy most of the film had been. Also, it didn't resolve anything: Janet, Brad, and Dr. Scott ended up in the middle of nowhere. There was no real point to their journey, and thus, no real conclusion.

That isn't to say there aren't good things in it. Tim Curry delivers a star-making performance as the demented Doctor, abandoning himself with outrageous glee to the role. He goes all in and creates a memorable performance, one that stands out for the sheer madness of the character. Also, the songs were great. Hot Patootie, Bless My Soul (sung by Meat Loaf) was great fun, as were Sweet Transvestite and Time Warp. In fact, I would make a case that Time Warp should have been one of the 100 Greatest Film Songs in the AFI list because it's so memorable and yes fun.
I think Sarandon and Bostwick too did well playing the ultimate squares.

Still, The Rocky Horror Picture Show isn't a film per se. It is an experience, and it's understandable why it has a cult following complete with people in costumes and props. As a movie itself, it doesn't quite work. I will grant that perhaps I am too much of a square to fully give myself over to the frivolity and camp nature of The Rocky Horror Picture Show. It's a fair argument by those who swear by the film. It is by no means horrible, with Tim Curry going all-in in an all-out performance. I however was not won over to the mad, mad world of Frank N. Furter.

For myself If interested, these are some thoughts on the cult of The Rocky Horror Picture Show.