Letters to God: A Review 
It's hard not to think about those old Judy Garland/Mickey Rooney movies while watching Letters to God. It's as if a church or group of Christians decided to follow in Garland & Rooney's steps and "put on a show", or rather, a film. There is nothing wrong with that: all filmmakers will bring their worldview into their work whether overtly (think James Cameron's environmental infomercial Avatar) or subtlety (John Ford's conflicted views on the conquest of the West in The Searchers).

That being the case, it's no surprising that co-directors David Nixon and Patrick Doughtie (the latter who co-wrote the film with Art D'Alesssandro, Sandra Thrift, and Cullen Douglas) would bring their faith into play. There are two ways of doing it: a good way and a bad way. The good way would be to have an engaging story with strong performances and a velvet-glove approach: gentle and beautiful. The bad way is to hammer the message of Christ over the head of the audience and just have people speak their lines with no sense of direction. Letters to God has opted for Option Two.

Tyler Doherty (Tanner Maguire) is an adorable child fighting cancer. In a bizarre and totally perverse way, his cancer makes him MORE adorable, as he continues with a bland chipperness to fight for his life. He spends his days at home, writing at least one letter to God a day. These letters are picked up by the Mailman Walter (Christopher John Schmidt), a cheerful fellow who practically knows every person on his walking route.

For reasons of plot contrivances, Cheerful Walter has to give up his route temporarily, and taking his place is Mailman Brady McDaniels (Jeffrey S. S. Johnson), who is definitely not cheerful or chipper or pleasant. He's an angry, lazy, borderline alcoholic who is tolerated at his job beyond anything that is reasonable or realistic. Taking over Cheerful Walter (and getting into "comedic" pratfalls in the process) Sour Brady has to take Tyler's letters, though as a non-believer he has no idea what to do with them.

For reasons of plot contrivance Sour Brady gets to know the Doherty family: widow mom Maddy (Robyn Lively), older son Ben (Michael Christopher Bolten), and Grandma Olivia (Maree Cheatham). Maddy continues on trying to keep herself together as her younger son's needs overwhelm her while her older son feels neglected (not without reason) and Grandmama offers rather pat answers based on her Christian faith. We also have Tyler's bestest best friend, a tomboy named Sam (Baylee Madison) who comes into Tyler's room through his window (making me wonder if they'd seen too many episodes of Doogie Howser, M.D.) and her grandpa Cornelius, a retired, slightly crotchety actor (Ralph Waite of The Waltons fame).

When Tyler is able to go to school, he even has an enemy, Alex (Carl Joseph Amari), though the feeling is clearly not mutual. Sam delights in dispatching Alex with violence, while Tyler continues to try to treat him as Jesus told him to (metaphorically as taught through Scripture--Tyler doesn't hear voices). As Tyler appears to recover, his faith and the strength he gets from it move everyone, especially Brady, who has his own demons to confront as an Iraq Intervention veteran who has lost custody of his son.

Instead, we were treated to rather bland, almost simplistic answers about God and how He works among us. A child dying of cancer is a serious issue, and it should be handled with great respect. Letters to God never explores just how frightening this might be for Tyler. I won't deny that his faith may have been so strong as to not have him, even once, question why or tell God just how much the cancer hurt him. However, given Tanner Maguire's performance, his cancer almost seemed like a mere cold run wild.

In fact, the performances were almost universally bad. Madison's Sam just was annoying for almost all the film, making faces and pouting to express any kind of emotion. Tyler's older brother Ben's had a very quiet anger as portrayed by Bolten. His situation would cause any teen to rage with fury. However, Ben never expresses all the anger within him because he never raises his voice. I kept getting the feeling that he was told not to speak too loud because it might disturb someone inside the house. Credit has to be given when he sings: he is a better singer than actor.

Lively didn't live up to her name: she never expressed much emotion at all. It was like watching an adult version of Kristen Stewart's Bella Swann: just a blank face offering words without meaning. Even smaller parts were almost flat-out bizarre: Derek Liondinoff's Pastor Andy spoke as if he'd been told to just "say the lines as if they were lines". Based on my own experiences, he didn't speak or behave like any pastor I've known. (Side note: it's curious that for all the Christianity in Letters to God, we never see anyone actually attend a Service. We see Brady's boss attend choir practice--even though his Christianity had never been part of his character as seen in the film--but no one actually goes to church. Curious that).

Johnson does a BETTER job than most, and if the film had focused more on his evolution from unhappy drunk to repentant sinner to blessed man we could have had a film. It isn't that there's too much going on, it is that there's too much going on too quickly. We never see how the letters to God start being sent or how Brady became more involved in the Doherty's lives.  We basically have to take it on faith (pun intended), but that's asking a bit much from us.

That could be tolerated (albeit with great reluctance), but the greater sin (an apt word) is just how hard the film-makers were at giving their message. At one point Maddy tells her mother, "I wish everyone would stop quoting the Bible to me". That would have been a good piece of advise for the director and screenwriters to have followed. You can't end a film by quoting Scripture (in this case, 2nd Corinthians 3:3--look it up to do yourself some good) and NOT be at least trying to use your work to spread the Word.

You have characters pray to accept Christ into their hearts, you have characters offer prayers for others--it's enough to scare away agnostics, antagonize atheists and disappoint some believers (like myself). Letters to God even includes the prayer captains/warriors in the closing credits (for the uninitiated, prayer warriors are a group of people who pray over people and/or their needs though the object of the prayers need not be present). I'm reminded of the words of Christ, who told us to be "as shrewd as serpents and as innocent as doves (Matthew 10:16). The people behind the camera failed on both counts. 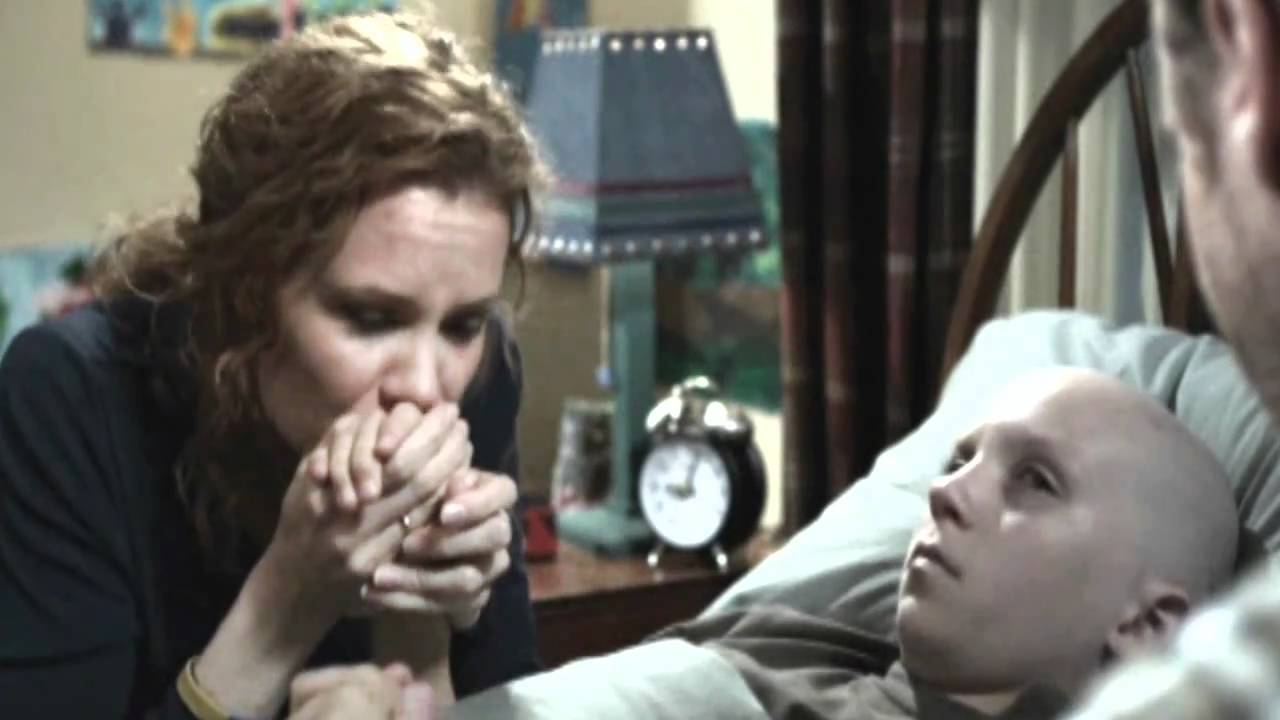 One last point: Colin O'Malley's score was from beginning to end so wrong: too intrusive, cutesy, overbearing. Even when it wasn't employed, the music still told far more than it should have. I knew it was not a good sign when I hear someone sing Amazing Grace.

As it stands, I worry that Christian film-makers will never achieve success. I'm not talking financial; I'm talking artistic. I'm reminded of the oft-heard quote, "if you're going to cross over, be sure to take The Cross over". Film-makers with a sold foundation on the Rock of Christ must decide if they are going to make films that will bring honor and glory to Him or films that will bring sinners to Him, whether they will create art or create proselytizing literature. It is possible to make films that achieve both goals, but as of yet modern Christian film-makers can't seem to decide what audience to reach.

Are the people who made Letters to God making films for Christian audiences or secular audiences? Judging from the film, it's the former while trying to masquerade as the latter. Trying to please two masters won't work.

Ultimately, I remember something from Letters to God: Ben is a BIG fan of the band Switchfoot. He in one scene wears a Switchfoot shirt and you can see a picture of them in his room in another. Switchfoot (which curiously did not contribute a song to the soundtrack) is the perfect analogy to Letters to God. Both have a Christian background and want desperately to reach a wider audience.

There is a difference: Letters to God is open and unabashed about its Christianity, while Switchfoot always tries to downplay or disassociate from Christianity, lest it be thought of as "judgmental" or aligned with conservative politics. The former wants to be a vehicle to reach the lost, the latter would rather not. In the end, neither get what they ultimately want: either a wider audience or an accepting one.