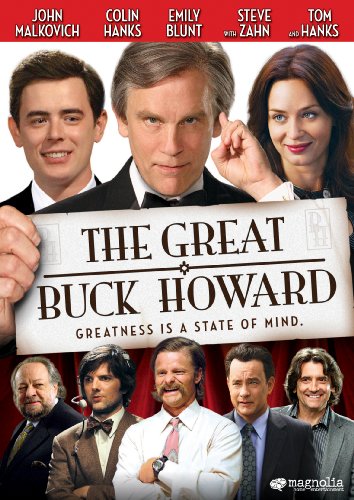 Second generation performers generally fall into two categories. There are people like Michael Douglas, Jane Fonda, Liza Minelli, and Angelina Jolie: children of legends who rise to prominence and become respected performers in their own right. Then there are people like Kate Hudson, Bridget Fonda, and Freddy Prinze, Jr.: people who stumble in their careers and don't match the records of their forbearers as of yet.


Colin Hanks is somewhere in the middle: he has the talent to become a star himself but has yet to achieve that breakout performance that will allow him to emerge from the lengthy shadow of his father. The Great Buck Howard wouldn't be a major box-office hit. It will, however, show he is a first-rate actor who, if given the right material in the right film, could be a rarity in Hollywood: an actor who can actually act.

Troy Gable (Hanks) has reached a crisis point in his life. Pushed into going into law school, he finds himself in total misery. He quits school to pursue his dream of being a writer but finding himself in need of a job, he accepts the job of road manager to mentalist Buck Howard (John Malkovich), who is always referred to as "The Great" Buck Howard due to Johnny Carson having named him so after one of his 61 appearances on The Tonight Show when Carson was the host.

Howard has hit a low point in his career: instead of The Tonight Show he plays small theaters around the country but is secretly planning a comeback (or should I say, A Return) that will put him back in the spotlight he believes he rightly deserves. Gable endures Howard's erratic temper and raging ego as Howard sets his plan into motion: in Cincinnati (he has a large following in Ohio) Howard will hypnotize 300 people if memory serves correct and then bringing them back as if from a sound sleep. While the stunt is a success the coverage is a disaster, and Howard blames junior publicist Valerie Brennan (Emily Blunt) and Troy.

Valerie retaliates by giving Howard a scathing pre-release article about him. The shocks of his stunt and the article cause Howard to collapse, but this is a good thing: the ensuing publicity puts him back on top. After making the rounds on other shows, he achieves his goal: The Tonight Show with Jay Leno. That, however, also turns into a disaster, and Howard agrees to go to Las Vegas. There, his signature act (finding his fee hidden among the audience using only his mental powers) fails for the first time, and his long-hoped for comeback ends. Eventually, Troy and Buck part ways, but they reunite when Troy goes to see Howard's show in a small theater. There, Buck shows his former road manager, metaphorically, that the magic is back. 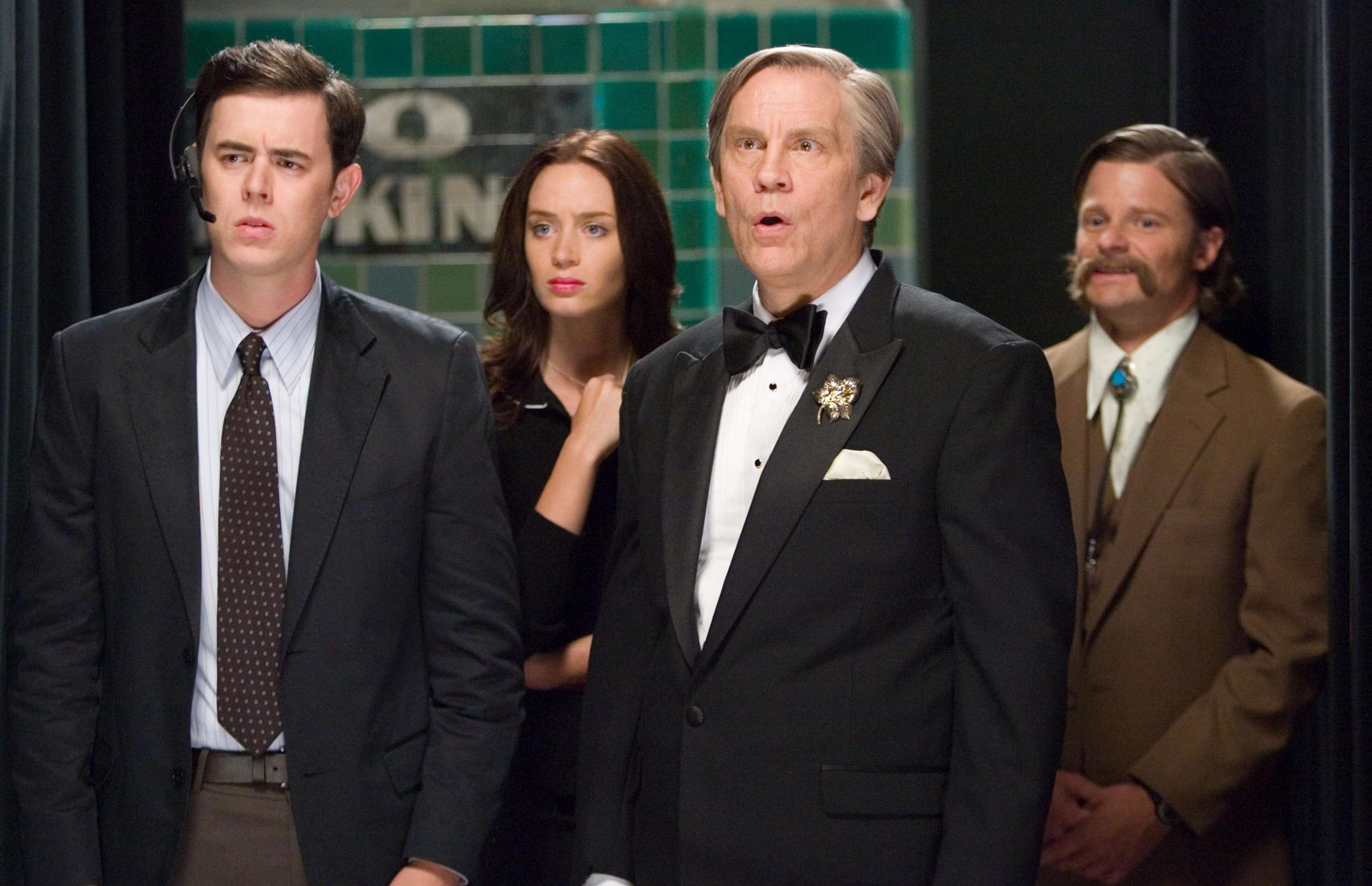 The Great Buck Howard reminded me of the brilliant Sunset Boulevard, not in terms of cinematic achievement but in subject matter. Both are about major stars who don't realize that their time has passed, but while Sunset's Norma Desmond retreats from reality Buck Howard merely ignores it.

Howard is totally self-absorbed to the point where he's oblivious to anything and everything that isn't Buck Howard-related.  It's an egoism not out of meanness but almost out of innocence that anything could genuinely be more important than himself. Howard is completely clueless about the world and his clueless nature is what makes it all the more amusing

When told that Valerie has set up an interview with "an Internet columnist" Howard is clearly frustrated. "You see, I don't even know that paper" he responds sincerely, almost innocently. He also is completely unaware of what exactly his 'good friend' George Takei worked on. When singing What the World Need Now as part of his act, Howard pauses to say, "George, may The Force be in you". When the Cincinnati press rushes out of his comeback act, he is puzzled as to why anyone would care about a traffic accident, even if it did involve some person named Jerry Springer.


It helps tremendously that the title character is played by John Malkovich, who adds another great performance to his established career. Malkovich creates a man who is almost innocent in his utter lack of knowledge of the world today and in his lack of tact. When he first meets Valerie, he is very displeased. "You're practically an embryo", he tells her. Coming from almost anyone else, you would dislike Buck Howard, but coming from Malkovich, you laugh.

That's the thing about the performance, which is one of his best: though he can be terribly insulting and egocentric, Howard is also passionate about his line of work. Even though he repeats phrases like "I LOVE this town" whenever he performs, and his act never changes, there is a sweetness and endearing quality in just how out of touch he is.

This is best shown when he's riding his comeback by appearing on various television shows like The Daily Show with Jon Stewart or Late Night with Conan O'Brien: for the former he tells the host about his concern over kids and drugs and for the latter calls the host "Colin", clearly unaware of who O'Brien actually is. He also is beyond shocked that The Tonight Show would consider Tom Arnold a bigger name than The Great Buck Howard. "I don't even know who that is," says a clearly stunned Howard. It's his obliviousness that makes him a delight.

Matching him is Hanks, through whom we see the film (he serves as narrator, and while I'm generally opposed to voice-over, here it works). He manages to make his Troy an affable young man (even though he was around 30 at the time) who is sincere in his fascination with Howard's act (if not the man himself) and someone who like most of young America has no idea who this star is. When given the names of television appearances Howard has been on, Troy is completely confused (it's highly unlikely he would have heard of a woman named Dinah with her own show).

Blunt is also wonderful as the publicist with whom Troy develops a relationship with. Writer/director Sean McGinly (basing his story on his time with The Amazing Kreskin) creates a fast-paced and fascinating story of someone who believes himself a star even though no one else does. Again, instead of retreating into depression, Buck Howard pushes on, knowing that in the end it's his job and the passion he has for it that is his true love. I should point out that as far as I know, The Amazing Kreskin is a pleasant man who is full touch with reality.

Even in smaller parts, Steve Zahn and Debra Monk (playing uberfans from Hell Kenny and Doreen) manage to create wonderful comedic performances. Zahn usually annoys me as a performer, but seeing that he was suppose to be annoying in the film, it worked. The only performance that I thought was off was that of Tom Hanks playing Troy's father in a cameo. Curiously, I think having Colin Hanks' real-life father play his film father didn't work: the elder Hanks didn't have the full sense of anger about his son leaving to pursue his own dreams. It's strange to say that Tom phoned it in, but in an odd way, I wasn't convinced that was his father...in the film, not real life.

The Great Buck Howard lives up to its name. It's an inoffensive comedy that makes us love the title character while identify with the central character. Both Malkovich and Hanks give first-rate performances that establish them as extraordinary talents.

Yes, Buck Howard is reminiscent of Norma Desmond: both yearning for a comeback (or Return) and who are unaware that they are no longer the big names they were. However, while Sunset Boulevard is from the dark side of fading fame, The Great Buck Howard shows there's light and humor in the fall of a former legend. I only hope Colin Hanks gets the attention and roles his talents deserve, and that the shadows be lifted from his career.