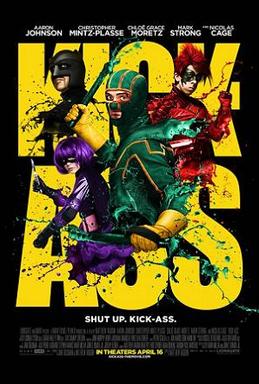 Having said all that, I can say that I've never encountered the source material for Kick-Ass, the latest comic book to be adapted into a feature film. I also guess that I'm not the target audience: dumb kids who live so vicariously through fictional characters that they fit the definition of insane: someone not of sound mind who poses a danger to themselves and others.

As it is, the trailers for Kick-Ass prepared me for an upbeat, goofy comedy about kids living out superhero fantasies who ultimately unite to fight real crime. What I wasn't prepared for was for it to be this really dark, depressing story of vigilantism gone mad, where people on both sides of the law are quite insane and wholesale slaughter is celebrated.

We start in New York City, where Dave Lizewski (Aaron Johnson), an average teen who likes comics, wonders aloud and in voice-over why people have never attempted to be real-life superheroes. With that in mind, and perhaps to deal with the sudden death of his mother, he buys a costume and takes on the alter-ego of Kick-Ass, crime fighter. Meanwhile (and the word "meanwhile" is written as it would be in a comic book), we have the stories of drug kingpin Frank D'Amico (Mark Strong) and seemingly mild-mannered Damon Macready (Nicolas Cage) and his daughter, Mindy (Chloe Moretz).

Dave/Kick-Ass (K-A for short) doesn't have much success fighting crime (even getting stabbed and run over the first time he tries his hand at it), until he comes across a group beating up someone while he was trying to rescue a kitty. He takes on this mob, and this fight is captured on videophones and placed on-line. He becomes a hit, even getting the attention of the girl of his dreams, Katie (Lindsy Fonseca)...even if she does think he's gay.

To help his girl, Dave/K-A takes on Rasul (Kofi Natei), a thug who's been bothering her. Being Dave, things go horribly wrong until he's rescued in a bloody fight by Hit-Girl, another masked avenger, and her mentor, Big Daddy. One guess as to who they really are. We learn through a back-story in a comic-book style montage that Frank framed Damon for trafficking, which led to his wife's suicide and that after he left prison Damon has been training himself and his daughter to take revenge on Frank, up to and leading to Frank's killing.

Due to a misunderstanding, Frank now thinks K-A is responsible for killing his men (Rasul's crew). In order to draw K-A out (and partly to live out his own comic book fantasies and fit in with his father's business), Frank's son Chris (Christopher Mintz-Plasse) convinces his dad to let him create his OWN alter ego, a new superhero named Red Mist. Red gains K-A's trust but while Red realizes K-A has NOTHING to do with B. D/H-G's actions, Frank is determined to kill them all. K-A & B.D. are captured and come close to being killed LIVE on television/on-line when H-G comes to the rescue. Now, it's up to K-A and H-G to bring Frank and Chris/Red Mist down.

This is WHY Kick-Ass fails, and fails spectacularly. It is incapable of deciding WHAT it wants to be. We're suppose to believe it is taking place in reality, but we get elements that are clearly cinematic. The whole subplot of Katie thinking Dave's gay (right down to him having to control himself when he applies lotion on her) is something more suited to the American Pie franchise, as is when he finally unmasks himself to her, then gets laid. K-A's rescuing a kitty is done in a comedic manner, but the mob attack K-A stops is deadly serious. This is typical of the unbalanced mood in Kick-Ass, and it see-saw's back and forth, trying to have it both ways and never getting far in either.

In reality, getting stabbed AND run over by a car would probably get you killed, and if you survive you may want to stop crime-fighting. In reality, Damon's former partner (Omari Hardwick) would have turned his friend in rather than allow him to train his daughter as an assassin. In reality, you wouldn't have an eleven-year-old commit mass murder without having SOME moral qualms about it. In reality, you'd think the actions of K-A, B.D. and H-G would show them to be just a little unstable, if not downright insane. In reality, you WOULDN'T have an ultra-violent climax in Frank's apartment right down to K-A's bazooka use. All those things wouldn't happen in reality. They'd only happen in movies.

The score (credited to Marius DeVries, Ilan Eshkeri, Henry Jackman and John Murphy--really, FOUR composers: The Lord of the Rings at nine hours had only ONE), also contributes to the schizophrenia of Kick-Ass. When Dave first dons his outfit, the score swells to a triumphant rise. This gives rise to the question: are we suppose to take this seriously or are we suppose to think Kick-Ass is suppose to be a spoof of comic-book films? By introducing the story of Damon/B. D. plotting vengeance on Frank (especially with drawn panels) you have a clichéd revenge story, no different than something from Watchmen.

The villains are also rather awful. Rasul and his crew are stereotypical black thugs while Frank and his crew look like they're auditioning for an updated version of The Sopranos, right down to the accents.

Let's go over the performances. Johnson captured the confusion of youth in his Dave, but I could never believe that he could be taken seriously as a crime-fighter when he shifted from geeky comedy to ultra-violent avenger at the turn of a dime. I respect Mintz-Plasse's efforts to get away from McLovin, but his Chris/Red Mist just came off as a whiny kid. Mark Strong is a good actor, and I'm convinced he can play anything: Jordanians (Body of Lies), British master criminals (Sherlock Holmes), and now American mafia, but as good as his accent was, why are we subjected to Italian stereotypes?

Cage, who I guess did this film to pay off his own comic book collection, spoke in this odd William Shatner-style delivery when dressed as Big Daddy (looking like a cross between Batman and Night Owl). The most disturbing performance goes to Chloe Moretz as Hit-Girl/Mindy. It was all right, but I do find it disturbing that at such a young age she is cursing left, right, and center.

This leads to another point. If we buy the premise that this is taking place in the real world, is anyone other than myself disturbed that a minor is killing people in such gruesome ways (crushing people in car compactors for example) with apparently great pleasure?When she rescues K-A, we're treated to a scene of an eleven-year-old slicing someone's leg off. We were already treated to the delightful introduction scene of seeing her father shoot her point-blank in the chest, and to director Matthew Vaughn, no, her wearing a bullet-proof vest does NOT protect you (no pun intended) from this being wildly disturbing to the point of sadistic. 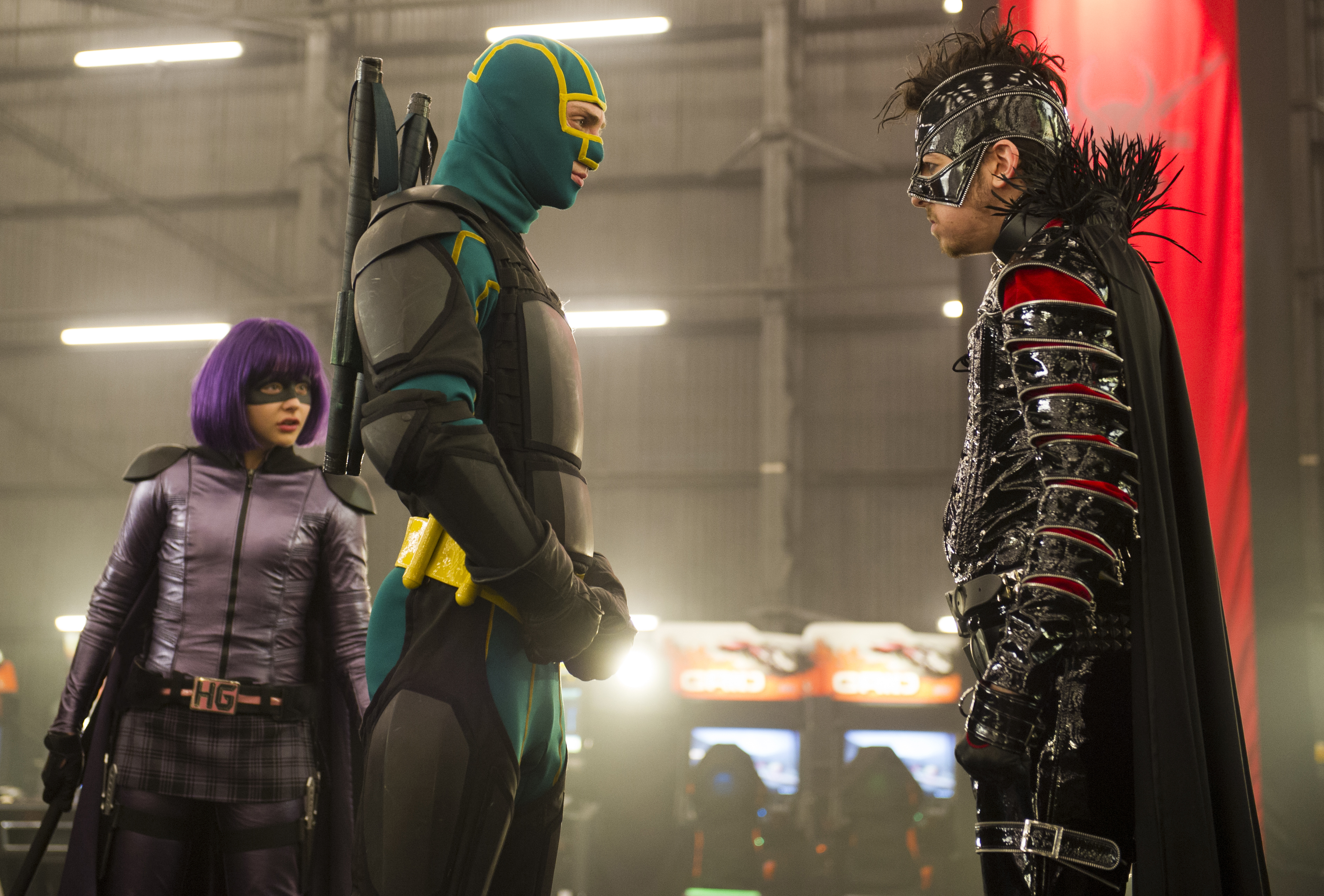 Topping off this mess, the WORST thing is that it violated one of my Golden Rules of Filmmaking: Never End Your Movie By Suggesting There Will Be A Sequel. That they did, and why we'd care to see Kick-Ass fight Red Mist when all they have to do is settle things in the school yard is totally beyond me.

In the final analysis, the only true thing in Kick-Ass is how grotesque society has become. When K-A is rescuing the man being beaten by a mob, he tells an onlooker to call 9-1-1. It's curious that in the film no one did. They were too busy videotaping the fight to do anything to stop it or call for rescue or the authorities. Kick-Ass ISN'T about superheroes, because none of them ARE superheroes. They are vigilantes, K-A more comedic perhaps, but certainly those who believe killing people because they are "bad guys" justifies having little girls blow people's brains out.

There's nothing super in Kick-Ass. The only thing it has is a collection of asses.