Cimarron covers the creation of Oklahoma from the Oklahoma Land Rush to its admission to the Union in 1930 as seen and lived through the Cravat family. You have Yancey Cravat (Richard Dix), a pioneer in the true sense of the word: a man consumed with wanderlust, always searching for new adventure. There is his wife Sabra (Irene Dunne) who starts out merely following her husband but who comes to her own in the frontier town of Osage. With them are their two children, a daughter Donna and a son named Cimarron. Don't let that confuse you: the boy Cimarron is not the center of the film Cimarron. Rather, it's the decades-long story of Yancey and Sabra, as they civilize part of the Wild West.

Credit has to be given where credit it due. Cimarron opens with one of the best and wildest opening scenes in film: an intense recreation of the Oklahoma Land Rush (which was only a mere 42 years prior to the film's release and thus, an event that some in the audience might have not just remembered but lived though). Director Wesley Ruggles does a good job building the tension the settlers must have felt before they were allowed to burst forward. Once they're off, it becomes a real Wild West Show.

Cimarron is impressive in how it captures the wildness and craziness of the Land Rush, made even more so by not having any music underscore it and by cutting in between wide shots and close ups of individual groups from men on bicycles to families in wagons. Ruggles even mixed in a story between Yancey and Dixie Lee (Estelle Taylor), who tricks him out of the claim Yancey was aiming for. Once the wild rush is over, Cimarron settles down, and it has a hard time recapturing the thrill it gave us in the beginning. Over the course of the film, the Cravats are at the heart of society in the boom town of Osage. There, Yancey and Sabra create a new world through their leadership and through the newspaper they create, the Oklahoma Wigwam. There are good moments cinematically: the scene where they arrive and we see various images of how the town and its population are coming together are done almost documentary-style.

However, in spite of its two hour length Cimarron feels like it has to hit all the subjects brought into the story: the outlaws, the bigotry and intolerance, even a little sexism, in a rushed manner. In many ways, Cimarron is reminiscent of another Edna Ferber story adapted to the screen, with the exception that Giant (about Oklahoma's southern neighbor, Texas) had both the appropriate length to tell its unfolding story and a stronger director in George Stevens.

Take for example a shoot-out that places the outlaw known as The Kid (William Collier, Jr.) against the law-abiding Yancey. Earlier in the film, it was established that they were on friendly terms though they disapproved of the roads they took. When The Kid is shot down, the drama the moment calls for is not captured on screen as well as it could have been. The same goes for in a long scene where religious services are held in the town casino. The whole town is there, right down to the "shady ladies" and the outlaws at the door. The long-running feud between Yancey and outlaw leader Lon Yountis (Stanley Fields) finally explodes, but it isn't the most exciting bit in the film when something like that calls for a building of tension and suspense. There are also the points of acting. Richard Dix, nominated for Best Actor, had what I would call a wildness and broadness to his performance. His Yancey was a large performance to put it generously. Edna May Oliver as Mrs. Wyatt reminded me of Miss Prissy, the hen who was always after Foghorn Leghorn in the Looney Tunes cartoons, not just in her looks but in the way she said, "Yes". I even wonder if they modeled the character on her performance in the film.

The one great performance is that of Irenne Dunne as Sabra, earning the first of her five Best Actress nominations. This is at the start of her career, and while the material may not have been at the level to her talent, she manages to create a well-rounded and conflicted character, one who loves her husband enough to endure basically being abandoned by him, and one who while friends with Sol Levy (George E. Stone) the only Jewish person in town, cannot fathom her son marrying a Native American only to come around at the end and embrace her grandchildren's heritage. 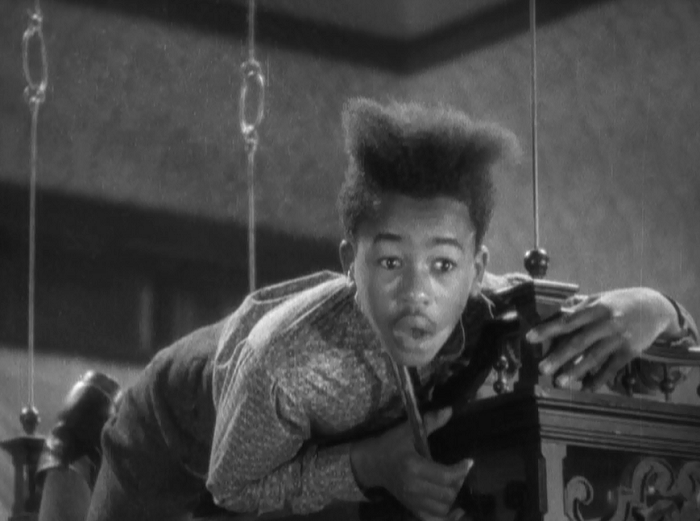 Let me digress slightly to address the charges of racism when it comes to Cimarron. The portrayal of the only African-American in the cast (Eugene Jackson as Isaiah) certainly is shocking by today's standards (and maybe even in 1931); hearing him call Yancey "Massa" when the film takes place after the Civil War is questionable (Yancey telling him there are a lot of watermelons in Osage for him does not help).  It not only dates the film, but leaves you with a slightly creep and uncomfortable feeling.

The fear and suspicion the Anglo population has toward the Native American is also not on the enlightened side. However, we must be careful on how we judge a film made seventy years before the Age of Obama. Yes, it would not be accepted today (as it should not have been accepted then) but it is part of the legacy of the conflicted race relations of America.

Also, we should take into account that the character of Yancey was overall much more tolerant of minority groups than his Anglo counterparts. He welcomed Sol Levy into the non-denominational service (after mentioning all the Christian denominations one could think of, Yancey ends with reference to "Hebrew church" after seeing Levy take a seat) and unlike his wife Yancey is not horrified at Cimarron romancing the Native American girl Ruby Big Elk.

He's even accepting of Dixie Lee and her situation while Sabra and the rest of the women want to run her out of town. By today's standards, Cimarron could rightly be called offensive. However, I can only judge a film by the standards of its time, which is the only appropriate standard to judge issues like this by.

After finishing it, I thought Cimarron was not the great film it could have been. However, it was not this boring fiasco of a film I was lead to believe. Not having seen the other Best Picture nominees (East Lynne, Skippy, The Front Page or Trader Horn, or even the non-nominated Morocco) I am in no position to decide whether it should have won Best Picture.  It looks like it was a weak year overall, and the spectacle of the Land Rush scene pushed Cimarron to the winner's circle.

However, time has taken its toll and has not been kind to Cimarron, which is pretty forgotten now and if remembered, remembered only for being a Best Picture winner.

My thinking is that the fact that it was a big-budget spectacle about the Old/Wild West (and especially the thrilling Oklahoma Land Rush sequence) pushed it over the top with Academy voters. However, if it's a quiet and boring afternoon you're facing, the first Western to win Best Picture is more entertaining than the most recent Western to do the same (I'm talking to YOU: No Country for Old Men).

Please visit my other Best Picture reviews as part of my efforts to review every winner of the Academy Awards' highest prize.