As I write the title, I am astonished by the truth of it. It has been nearly thirty years (I confess, a bit more than my whole life) that separates the original Clash of the Titans with its remake. In theory, someone watching the Sam Worthington version could have been conceived right after his/her parents had watched the Harry Hamlin version.

Here is my predicament: is it even right to compare one version with the other? Shouldn't they be judged on their own merits? Well, yes, and they have been, at least by myself. I've written reviews for both independent of the other's existence. However, I think it is good to see them face-to-face, because it gives us a chance to see if and how one or both succeeded or failed.

Let's remember that the Charlton Heston version of both The Ten Commandments and Ben-Hur are technically remakes. I'm willing to wager that most people don't realize that--as far as the general public is concerned those are the original films. It doesn't help that the originals are silent films, which unfortunately have the effect of frightening many people into equating that with "boring". I've always held that's reverse snobbery, but I digress. To make things easier, I'll refer to them as "1981" and "2010". 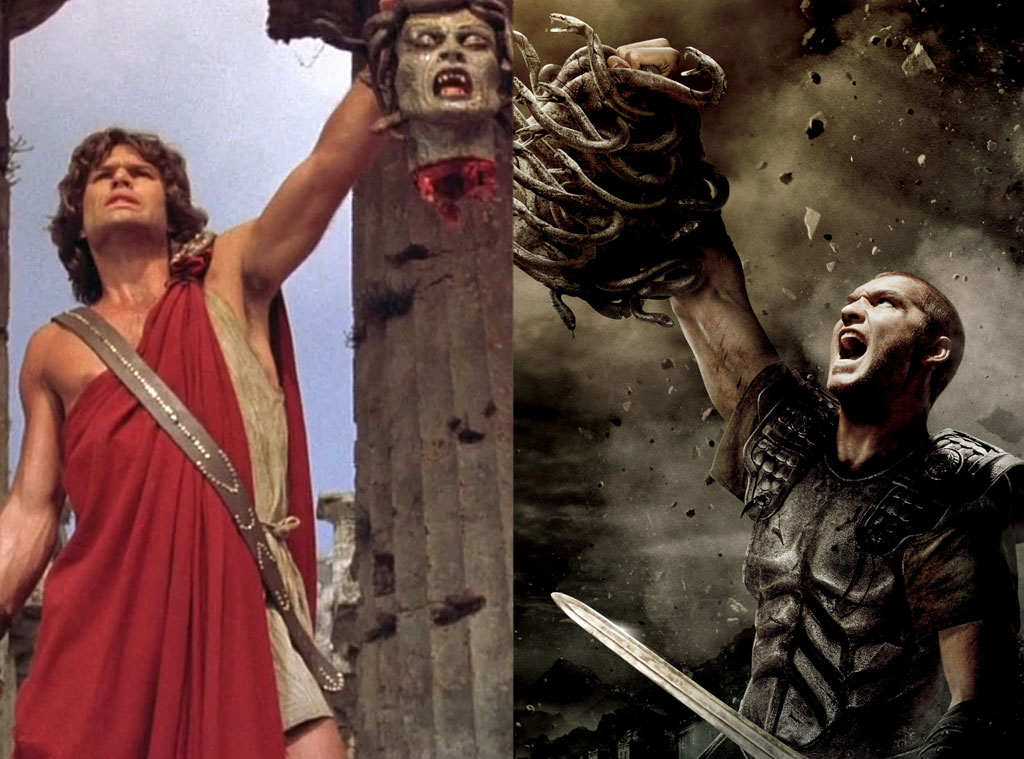 As it stands, the main difference between 1981 and 2010 is in tone. 1981 is more whimsical, more willing to accept its limitations of being a fantasy where the imagination ruled. 2010 wants to go for a grittier, more realistic and definitely more action-oriented route. In 1981, one was willing (almost expect) to suspend disbelief, while 2010 expects (if not demands) the ultimate in realism. When you have such different approaches to material such as Clash of the Titans, you have two different films but not necessarily the same result.

This difference can be surmised quite easily. Let's look at the leads. Harry Hamlin is no Laurence Olivier (in his Hamlet prime that is), and his interpretation is more dreamy, soft--he is the requisite hunk that goes for the heroic without messing up his long, flowing hair. Sam Worthington is no Liam Neeson (in his Schidler's List prime that is), but his interpretation is radically different.

This guy is all action, a hulking piece of anger and muscle ready to kick some divine ass and no time to mess with his cropped hair. It might be that Hamlin wasn't so well known when he made 1981 while Worthington had come off the most financially successful film of all time (Avatar), so the former didn't have the baggage of being identified so strongly with one role...or having been in a horrid film like Terminator: Salvation. Hamlin was a fresh face but Worthington was cementing being the go-to guy for Action roles.

Here is another point where the divergent visions for the films made them rise and/or fall. Look at the character of Zeus. Both feature extraordinary talents in somewhat silly material, but if you notice one has a large, bulky, massive (and I'd argue excessive) costume, while the other is wearing a simple toga.

Here, you can tell the difference in what each version of Clash of the Titans was going for. 1981 wanted to keep things simple to correspond with the innocent and fantastic theme of the production, while 2010 wanted to be action: powerful, intense, massive. 2010 was geared toward guys--the type who are into action films, maybe a little UFC or WWE. 1981, conversely, was geared toward boys--the type who are into fantasy films, maybe some comic books. 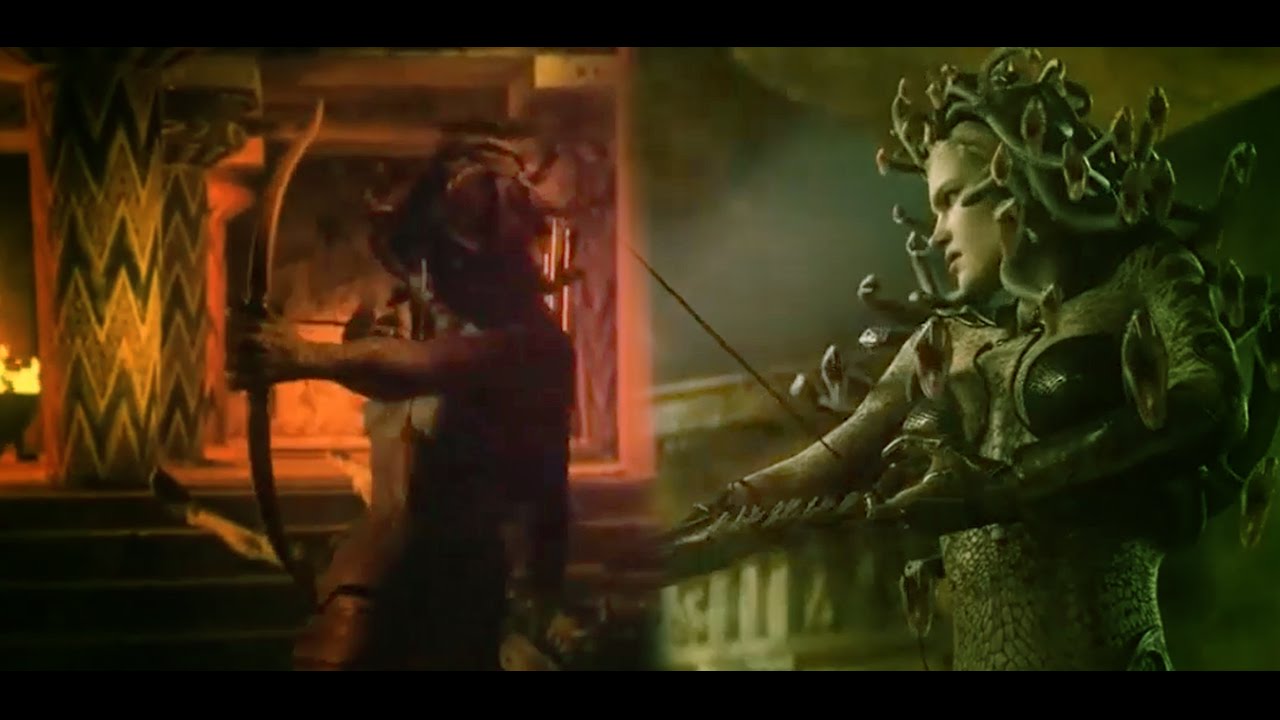 Yes, the stories were different: while both focused on Perseus, 2010 was one where revenge was the motive while 1981 the motive was romantic love. It was love, a passion for Andromeda, that motivated Perseus. The whole reason 1981 faced the Stygian Witches, Medusa, and the Kraken was to save her from being devoured.

In 2010, Andromeda wasn't anywhere near the motivation for Perseus. He wanted revenge for Hades having killed his adoptive parents. This Perseus could easily have picked up any other woman (especially his guide, Io). When you have different motives, you have different results. All the actions of 1981 were for Andromeda, while all the actions for 2010 were for Perseus. One needed to avenge his family and denounce his demigod heritage, while the other needed to save the woman he loved and really never gave much thought to the fact his father was a god.

It's curious that in 1981 the gods had a greater role in Clash of the Titans than in 2010. In the former, they were the ones either helping or hindering the hero's quest--they were an active part of the story. In the latter, they were again incidental, almost irrelevant. The gods weren't featured because there were essentially only two gods: Hades, Lord of the Underworld, and Zeus, King of the Gods. It was just a fight between them for control.

Here's another curiosity: the women in 2010 were almost on the whole silent--there were no goddesses taking part, and the mortal women didn't have much to do. 1981 was almost all women: Andromeda went with Perseus in his search for the Witches (although she was left behind when they pursued Medusa) and it was the goddesses who presented (under orders) the gifts for Perseus. Thetis (Dame Maggie Smith) in particular had a major role as instigator of all the goings-on.

Isn't it a curiosity (at least it is to me) when you have the women in the 2010 Clash of the Titans marginalized so much when two years earlier you had one coming close to being nominated for President (Hillary Clinton) and another actually running for Vice President (Sarah Palin)? This only solidifies my case: 2010 was made with testosterone in mind, 1981 was made for everyone else.

Now, let me get to the technical aspects. 1981 was clearly a showcase for the genius of Ray Harryhausen and his stop-motion animation special effects. 2010 was retrofitted at the last minute to cash in on the 3-D revival brought about by Avatar. You look at the two films now, and while you can see the special effects in 2010 are more sophisticated than 1981 they aren't (and I think won't be) as beloved as 1981. Harryhausen's style is unique to him, and even more unique now when you realize that the kind of work he did isn't done anymore.

The cry for "realism" in visual effects makes it nearly impossible to ask audiences to accept anything that knowingly looks different on screen. The leaps in visual effects from such films as The Matrix, The Lord of the Rings, and Avatar don't make the ones for 2010 Clash of the Titans anything special but instead rather routine. We expect those types of effects, ones that have little personality but are cookie-cutter. Harryhausen, however, is in a class by himself. There is simply nothing like it now, or even back then.

There is something special, something magical, something fantastic, about Harryhausen's work. In fact, the only scene which comes close in 2010 to matching 1981 is when they are in Medusa's lair. Both are fantastic-looking, but while 1981 is conscious of the fact that it's fantasy, 2010 wants to go again for realistic and intense. There's the difference: no sense of fantasy and fun and adventure in 2010, full acknowledgement of all that in 1981.

It just isn't the effects. It's in the music: 1981 had a score that was light, happy, with a sense of fun, and 2010 was loud, ponderous, forceful. It's in the look of the film. Watch 1981 and you'll see how much light there was in it. Even the night scenes seem to be really closer to dusk or dawn. Throughtout 2010, the film was almost permanently dark--it was as if little light was allowed to go in. I can only think of one time when there was light: the fight with the scorpions, while I'm still hard-pressed to think when there wasn't light in 1981.

It's even in its most famous line. If memory serves correct, Olivier said, "Release the Kraken" twice, and Neeson once (don't hold me to either). Neeson made it a big line by shouting it (as seen in the trailers). Olivier, curiously, never rages that line. In fact, I was surprised at how soft and gentle he said it. It should be remembered that both read the line correctly: Neeson was filled with fury, while Olivier was filled with resignation that there was nothing he could do to stop the Kraken's release. However, I think a myth behind "release the Kraken" was built up in our collective subconscious, and from that we came to expect this to be a declaration of war as opposed to one of submission.

There really is no mystery about it. The 1981 Clash of the Titans was purely a fantasy/adventure film, seeking nothing more than to entertain and provide a good time. The 2010 Clash of the Titans want to be a fiery action flick. One knows what it is, the other wants to be something but doesn't have the stamina to do it.

I think this is why 1981 is still loved while 2010 failed at the box office (although the change to 3-D did not help matters) and won't be held with such affection. Yes, there will be those who will favor 2010 over 1981, as is their right. However, for myself, I will take the fantasy over the gritty, Harryhausen's magic over fake 3-D.
Posted by Rick at 4:23 AM