A Crusader Who Became A Nobleman.
A Nobleman Who Became An Outlaw.
An Outlaw Who Defied the Monarchy.
Gladiator: 1199

Here is the key to understanding Robin Hood: it's not really about Robin Hood. Instead, it's about General Maximus' British descendant. Given the film, it isn't too far-fetched to imagine Maximus' bastard child escaping to Britannia and begetting a medieval warrior. Both the Spaniard of Gladiator and the Sherwooder of Robin Hood (though technically, the film doesn't make him from Sherwood Forest) are essentially the same men in different times; both are still angry, growling men of action with a big beef against their sovereign.

Robin Hood as told by screenwriter Brian Helgeland is really an origins story on how he became the outlaw we've come to know and love. As directed by Ridley Scott and performed by Russell Crowe, it is amazing to think Robin could ever have been liked, let alone loved.

We begin in 1199 A.D. after the Third Crusade. Robin Longstride (Crowe) is a loyal, though unhappy archer in the Crusading army of Bad King Richard I, The Lion Heart (Danny Huston). The King is plundering his way across Europe to get back to England, and is laying siege to one last castle. On the sidelines, Sir Guy (Mark Strong) is in cahoots with the French to kill Richard so that they can invade. How Prince John (Oscar Isaac) plays into all this is a bit muddled, but Bad King Richard dies before taking the castle and his loyal aide Sir Robert Loxley (Douglas Hodge) is killed in the ambush.

Sir Robert manages to get Robin, who along with his fellow deserters Little John (Kevin Durand) and Will Scarlett (Scott Grimes), to promise to return his family sword to his blind father, Sir Walter (Max von Sydow). They return and stick around Nottingham, where Robin is persuaded to continue pretending to be Sir Robert, much to the initial displeasure of Lady Marion (Cate Blanchett) and the suspicion of Sir Guy. With the Crown finally his, King John wastes no time squeezing his subjects for more tax revenue, but it couldn't have come at a worse time. His barons, angry about how they're being robbed by the King as well as Guy's French mercenaries, won't support their monarch until he promises to grant them certain rights (that pesky Magna Carta thing). He does so, and united they fight against the French and Sir Guy's forces. 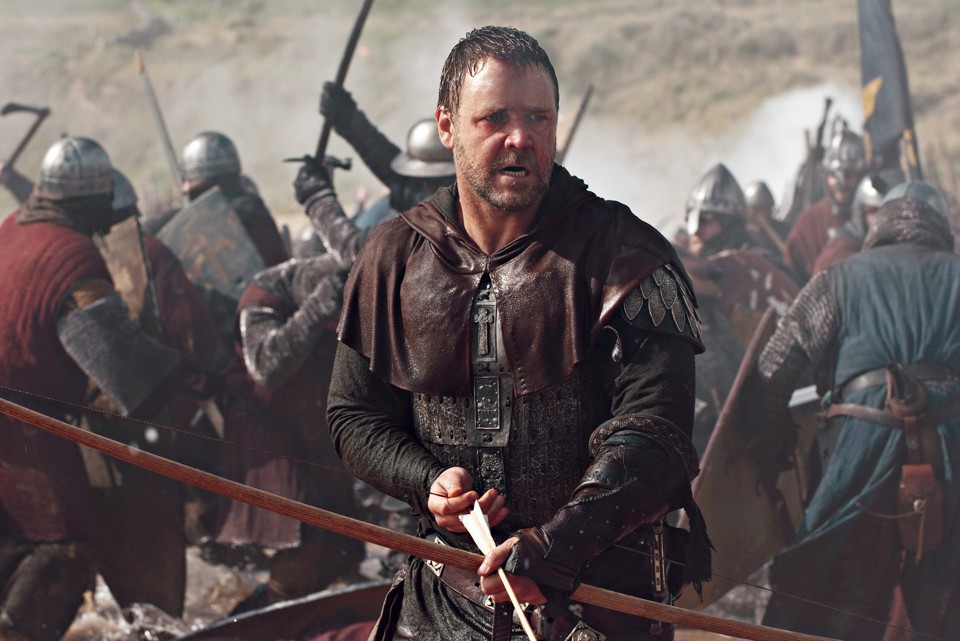 Where Robin Hood went wrong, well, there are many places where Robin Hood went wrong, but let's start with the story itself. So much of what we know (or at least should know) about the legend of Robin Hood was missing from the film. It is true that modern-day filmmakers want to adapt stories to what they think are modern tastes, to try for another perspective. However, Scott, Helgeland, and Crowe took it upon themselves to not just change a few things. They decided to make up an entire story itself.  One can try to get away from the source material, but if you're going to keep certain things, making too many changes muddles things unnecessarily.

For example, Robin and his Merry Men had before been a group of outlaws hiding in Sherwood Forest who took the excess that Prince John stole from the poor to give it back to the people. The Sheriff of Nottingham was their constant foil, and Robin (who was really a nobleman) were waiting for the day when Good King Richard would return to restore the kingdom. By making Richard I a bad guy and killing him off early in the film, it A.) robbed the story of a sense of hope that the true king would set things right for all, and B.) placed far more responsibility on Robin than he should have had.

Robin Hood was suppose to take us through his journey of becoming the bandit of legend, but we didn't get to see him evolve because this Robin just went along with things merely because he was asked to.

You therefore have a reason why he fights, rather than having to go through some pointless subterfuge for most of the film. Another needless plot point was in the elaborate plot to assassinate Bad King Richard when he is killed early in the film. Why not just have the King actually assassinated, or at least held hostage (again, for in real history he was captured and ransomed on his return from the Crusades), and why not have Guy be by The King's side instead of coming over for the French?

Finally (and most insulting to our intelligence) Walter knows something about Robin's father--how I'm not too sure, but I digress. Let's just say that Robin's discovery about his father's legacy has to be the worst case of suppressed memory in the history of film. We start by Robin remembering his father left him at age six, but then we have him recalling his father, shall we say, didn't leave by his own free will. All these things were flat-out unnecessary, and that leads to yet another issue.

At nearly two and a half hours it was just far too long. The opening siege went on for a long time: one wouldn't be blamed if one thought it took months rather than a day or two. The constant celebrations that took place in Nottingham were also not relevant to the overall plot, so there would have been no trouble if they had been trimmed or cut altogether. However, the drawback to that would have been to have taken out the only real light moments in Robin Hood altogether.

That is the trend nowadays, isn't it? Films cannot be an escape anymore. They have to say something. They have to be real, they have to be gritty. Robin Hood certainly meets it gritty quota. John Mathieson's cinematography was very dark, one where very little light was allowed to enter. It captured the overall mood of Gladiator...I mean, Robin Hood. The forests of England it seems look exactly like the forests of Germania from that other movie, with their fog and darkness.

It wasn't just in the look of the picture but in the mood of the picture that Robin Hood was dark. I don't think Maximus...I mean, Robin, ever cracked a smile once. In fact, only Will Scarlett and Friar Tuck (Mark Addy) ever seemed to come close to enjoying themselves slightly.

Side note: for the longest time I had to guess that the redhead was Will Scarlett because it wasn't until they got back to England did I hear Robin call him that, and my only clues were his hair color (scarlet) and his jolly persona. However, I was reminded about three times that we were in Nottingham due to the word 'Nottingham' appearing on the screen. This to me signals a lack of trust in the audience's ability to know or be able to follow the story.

It also leads to yet another problem with Robin Hood. He had three fellow veterans with him who stuck with him for no other reason other than that they had nothing else to do. They weren't bound to him out of love or loyalty or friendship, so why did they stay with Robin when he told them at least twice that he was going to go his own way?

Marc Streitenfeld's score was quite determined to make its presence known: the swelling music when Robin speaks to the group of barons, soldiers, and King John about the rights of the people was just so pretentious and far too much to take.

If we go over the performances, we see that they had a very small range within the cast. Crowe is still growling and scowling like in his Gladiator prime, determined to give the appearance of not enjoying himself, thinking that the more angry he looks, the more dramatic he looks. It doesn't help that his accent is of indeterminate origin. At the risk of having a telephone thrown at me, yes, he does sound vaguely Irish in Robin Hood.

Von Sydow was broad as the slightly doddering Elder Loxley, and one couldn't decide if he was merely senile or downright crazy. I used to like Strong, and while I applaud his decision to embrace baldness I am at a loss as to how he could think his scenery-chewing could come from the same actor who was the only good thing in Body of Lies.

Isaac gets a chance to do two things: show off his physique and show how to rant like the worst of them. Blanchett is inconsistent in her Lady Marion (side note: why is she no longer a Maid?). She is suppose to be a modern (at least by today's standards) woman of action, but she still is unable to stop herself from trembling slightly at the sight of a shirtless Russell Crowe. That scene where she removes his armor could have been erotic if her Marion were more assertive, but the forced situation of pretending to be married gave me faint memories of Leap Year.

The climatic battle where the French do their version of the Normandy invasion was shamelessly echoing Saving Private Ryan and not exciting. Instead, it was so determined to be this big, epic battle that Scott decided that pulling out all the stops would make up for all that the story lacked. It didn't, mostly because the battle wasn't the end.

We had a denouement where King John rejects the Great Charter (aka Magna Carta) he had verbally agreed to in order to get the barons to fight for him against the French. As it stands at the end, the Sheriff of Nottingham (who was a virtual non-entity in this Robin Hood story) declares to the people that Robin of the Hood is an outlaw. When he asks for a nail to post this royal decree to a tree, what to you think appears?

There is one more point in Robin Hood that I thought just so flat-out bizarre. There was this group of what I took to be children raiding Nottingham from their Sherwood Forest home. They looked to me like a cross between The Lost Boys from Peter Pan and the junior Druids from pre-Roman times. Why Scott and company decided that the Merry Men should be Celtic children I don't know.

Robin Hood was too determined to be 'real' and 'gritty' to be what all other Robin Hoods have been...fun. The film ends with title cards (which were beautifully done) saying, "And So The Legend Begins..."

I'm going to go on a limb and say that Robin Hood violates one of my Golden Rules of Filmmaking: Never End Your Movie By Suggesting There Will Be A Sequel. It would be amazing to think that the 46-year-old Crowe would be beginning a franchise and be running around Sherwood Forest, leading a group of rebels at nearly 50.

If they really thought or believed this film deserves a second part, then that would basically make Robin Hood the Longest Trailer In Film History. Ultimately, Crowe Can Go Because Flynn Is Still In.