We CAN'T Be Heroes. Thoughts on The Rise and Fall of 'Heroes' 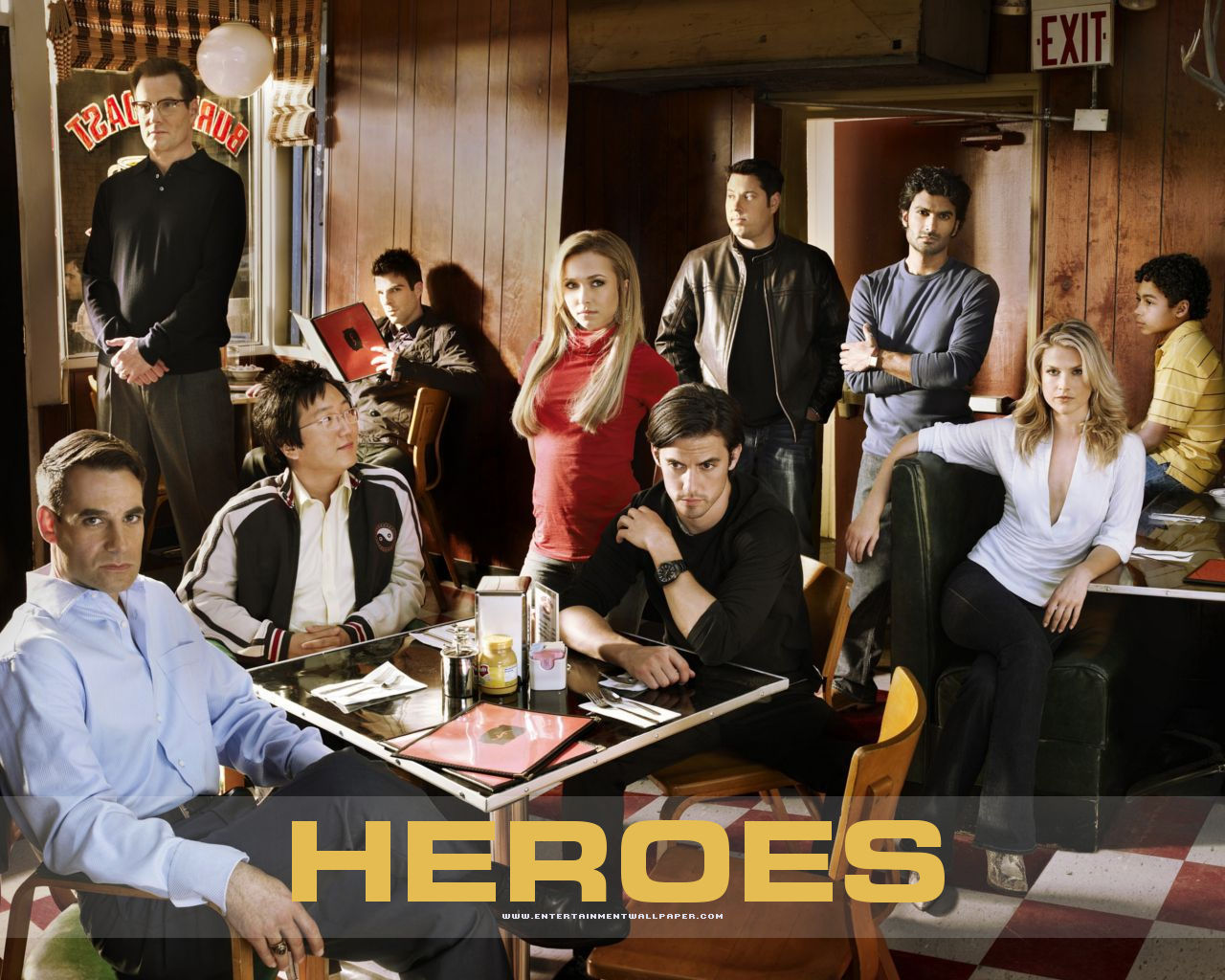 "Save the cheerleader. Save the world". Who didn't know that line? In 2006, it was catchy, mysterious, intriguing. Out of that spun an extraordinary cult that pushed a television show to dizzying heights, but when it fell, it fell hard and fast and furious. In the course of four years (FOUR YEARS) Heroes went from phenomenon to forgotten.

How did this happen? How was it that this show didn't survive? How could something that inspired legions of devoted followers disintegrate in such a short, and I'd argue spectacular, fashion? When people look back at this, Heroes will be used as a textbook example of how a good premise got run to the ground when it decided anything goes, when it got too big for itself, and when it took the fanbase away into places they didn't want to go.

I confess: I watched the first season on a semi-regular basis, therefore these are the musings of a part-time fan. For myself, I was fascinated by the mystery of the characters, how this group of disparate individuals discovered they had superhuman powers. By concentrating on the characters and their lives, eventually leading to one point (saving the world), Heroes became an exciting program where every week you ended with a new twist that kept you coming back.

However, for me, the first step in my declining interest lay in the season finale. It has been a while since I've seen it, but if memory serves correct Claire (said cheerleader played by Hayden Panettiere) actually had very little to nothing to do with saving the world. As I remember and saw it, it was the Petrelli Brothers (Congressman Nathan and nurse Peter as played by Adrian Pasdar and Milo Ventimiglia respectively) who saved the world.

This to me was cheating. All this time I was lead to believe that by saving Claire she would be a major part of saving the world. However, since she didn't, I wonder if the audience at large felt deliberately misled.

I guess "Save the Congressman, save the world," doesn't have a ring to it. That being said, the first season ended spectacularly, leaving the audience interested in what would happen next.

As it stood, the writer's strike cut Heroes second season, so perhaps that also added to the show's fall. That's an easy way out because all other shows faced a similar situation and have survived (Chuck is a prime example). From my vantage point, Heroes began to fall apart when Sylar became the dominant part.

I think Zachary Quinto was great (and the fact that he got Spock in Star Trek out of Heroes is nothing to be sneezed at) but I kept thinking Heroes was becoming less a show about ordinary people who discover great powers than a "Who will Sylar kill this week?" show. You start wondering if it's worth your time to invest yourself in someone who will get their head sliced open.

Even all that could have been tolerated and Heroes could have returned to its genesis (to use their terminology). I think, however, the beginning of the end came at the third season's premiere (at least my memory states it is the third...so hard to remember). What I do remember is that the cast had some sort of televised pre-show party, where they talked to us about their show and their characters and basically how great it was in a cocktail-hour atmosphere that smacked of self-aggrandizement. (I taped it and it might still be somewhere--worth looking at again).

Whether or not my memory of season three's pre-premiere party is accurate is debatable, but the impression I got was that the cast (and the creative team behind it) somehow got it into their heads that Heroes had become the Citizen Kane of programs, but the third season became if not their most controversial their most nonsensical.

Characters that had previously been mere mortals suddenly became superheroes themselves (yes, I'm aware that it was as a result of an injection of some kind, but still...). That kind of plot twist reduces the mystery of the other's powers to where anyone can get them, violating the premise of the first season altogether.

It's a bit like what sunk Star Wars: The Phantom Menace--just as there were howls of protest when The Force became something that could be measured in the blood, many die-hard Heroes fans I knew were appalled at how secondary characters suddenly had powers themselves. My friend Fidel Gomez, Jr. (who may or may not be dead) was furious at the thought that Ando Masahashi (James Kyson Lee), who was for two seasons merely time-traveler Hiro Nakamura's (Masi Oka) mostly comic sidekick, now had powers of his own.

For me, I still howl when I remember watching former geneticist Mohinder Suresh (Sendhil Ramamurthy) climbing the walls...but I was howling with laughter. 'When did Suresh turn into Spider-Man?', I wondered.

If memory serves correct, the injections had another side effect: it made the mostly respectable doctor turn into some loony sex addict, which was completely out of character (in more ways than one) and which I thought a mixture of comic and idiotic. It was all becoming flat-out nonsense, and for me, that's when I threw my hands up and decided this show had jumped the shark. Having a character named "Claude Rains" (Christopher Eccleston, somehow deciding this was better than Doctor Who) did not help. Maybe I'm just too big a fan of old movies, but I wonder if anyone at Heroes decided that having a character share the same name as the actor who played Captain Renault in Casablanca wouldn't be noticed by anyone. Everything about "Claude Rains": the name, his powers, having the Ninth Doctor there--all made me laugh.

This leads, actually, to another reason Heroes collapsed: all these characters with all sorts of powers who pop in and out of the show with little rhyme or reason. "Claude Rains" (all I can hear is, "I'm shocked, SHOCKED!") as far as I know wasn't in the show long enough to make a big impact on the story-line.

It also gets more confusing when Ali Larter (who was awful in Obsessed) goes from one character with a questionable power at best (Nicki Sanders, who has super strength and what I gather is a split personality) to playing another character with another questionable power altogether (Tracy Strauss, who can freeze things). NO--having her play identical sisters does not let them off the hook. When I watched another episode I thought she was still Nicki, so I was wondering what was going on.

In short, Heroes was becoming too convoluted and too engrossed in its own mythology to continue making any sense. This will happen to all shows, where story-lines have to be brought into some form of continuity, but with Heroes, it was doing this at super-fast speed. I think the creative team wanted to make Heroes something mythic, but in their efforts to do so they only succeeded in explaining things to themselves and each other, not to the average viewer.

By the time Season Five rolled around, America had given up trying to sort all this out. They were too busy trying to figure out Lost (a show that I am not a fan of after watching the first season, but I digress). In short, all these secondary characters popping in and out nilly-willy (most of which bombed: siblings Maya and Alejandro being particularly hated among the Heroes fans I knew), all the changes to the main characters themselves (Sylar is good! Suresh is bad! Japanese swordsman Takezo Kensei is British!), was making the show not the intriguing mystery it started out to be, but a hodgepodge of curious leaps of internal logic in the hope of bringing the mystery back when all that had to be done was keep things as they started and build up from there.

Well, the time for Heroes has ended. It's no surprise that it was cancelled. What was once the subject of major conversations descended into almost self-parody. By the time the production team realized this, it was too late. The audience had left, with only a few true-believers left to care about this myth. Perhaps, in time, with DVD, people will rebuild the world of Heroes in the same way Star Trek was rescued from oblivion.

Let's remember that Star Trek lasted only three seasons, and is now the source of various spin-offs and even an Oscar-winning movie. Or, when people watch, they will see the exact point when a good show decided to take one wrong turn, then another, and then a third, until it became hopelessly lost and, like Nathan or Peter, crashed on landing. I don't think even Matt Parkman (Greg Grunberg) could have seen this coming.
Posted by Rick at 7:41 PM