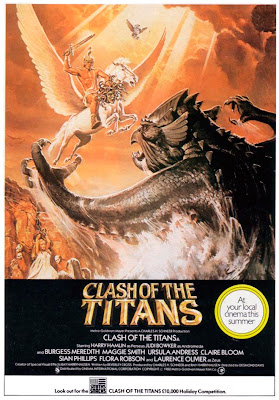 *(Author's Note: this review will not take into account the 2010 remake of Clash of the Titans but will be judged as if this version is the only one in existence. In another essay the comparisons between the two versions are made).

Was it a good thing or a bad thing that Clash of the Titans was released the same day as Raiders of the Lost Ark? Certainly it marks an unofficial demarcation point in film history: the old-style fantasy of a Ray Harryhausen and his stop-motion animation gives way to the thrill-a-minute fantasy of a Steven Spielberg. I would imagine that Spielberg and George Lucas were inspired by Harryhausen's films such as Jason and the Argonauts, The Golden Voyage of Sinbad, or 20 Million Miles to Earth.

However, audiences from this point on have begun clamoring that special effects be "realistic" as opposed to "fantastical", where they are not real but require imagination and a sense of fun and fantasy to accept them as real. Very few people, I imagine, will argue that Raiders of the Lost Ark didn't change the film-going experience. Though I imagine no one will say the same about Clash of the Titans, I would say that both films succeed where they aimed at, and that both films work their magic thirty years after their release.  Yet I digress.

At its heart, Clash of the Titans is just a good old-fashioned fantasy film that seeks nothing else but to provide a delightful and entertaining story. This mash-up of Greek mythology by screenwriter Beverley Cross is really a big family feud. On one side you have Zeus (Laurence Olivier), King of the Gods, who takes pride in his half-mortal son Perseus (Harry Hamlin). On the other, you have the goddess of the seas, Thetis (Maggie Smith), who watches helplessly as her son, Calibos (Neil McCarthy) is turned into a monster on Zeus' command for destroying his herd of flying horses among other crimes. Zeus isn't hesitant to destroy things or people: in the beginning he destroys the city of Argos because the King tried to kill his own daughter Danae (Vida Taylor)...who just happened to give birth to Perseus.

This Zeus accomplishes by ordering the release of the most feared and the last of the Titans, the Kraken. The gods being the gods, they can't help themselves in playing with mortals or demi-gods: Thetis takes the figure of Perseus and sets him in the amphitheater of Joppa, her city. Now that the Princess Andromeda (Judi Bowker) won't marry Calibos, the pair has put the city under a curse: any man can ask for the Princess' hand in marriage, but he must answer a riddle with the wrong answer being death. The Queen Cassiopeia (Sian Phillips) isn't happy about any of this, but what can she do? What can Perseus do?

As it turns out, Zeus has commanded the other goddesses: Hera (Claire Bloom), Athena (Susan Fleetwood), and Aphrodite (Ursula Andress) to fashion gifts for Perseus. With these objects: a shield, a helmet that makes one invisible, and a sword, he will be able to fulfill his destiny, aided by poet and playwright Ammon (Burgess Meredith). Perseus discovers how Andromeda is taken to Calibos' court in the Marshes, and in order to get there he must tame Pegasus, the last of the winged horses.

He solves the riddle and manages to remove Calibos' curse on the city, but just before Andromeda and Perseus are to be married Cassiopeia makes the mistake of calling her daughter more beautiful than Thetis herself in Thetis' own temple. The goddess, already furious with Perseus for having injured her son, now demands a virgin sacrifice: Andromeda, to be done in 30 days or else she will release the Kraken and have Joppa destroyed. Now they must journey to the Stygian Witches, all-knowing cannibals who tell Perseus that the only way to defeat the Kraken is to show him the head of Medusa which can turn anyone to stone. Helping him on his journey is Bubo, a mechanical owl given to him by Athena after his helmet is lost fighting Calibos. With time a'wasting, Perseus goes to the Isle of the Dead to his impossible mission before Andromeda is devoured. 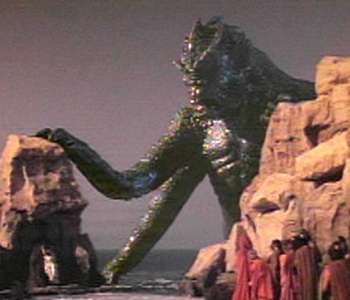 Where Clash of the Titans gets it right is in knowing that this is not an intense Werner Herzog exploration into the heart of darkness but a fantasy film where we aren't suppose to think deeply while watching. Its one goal is to entertain, and it does it admirably. This is shown in the performances of Bloom, Meredith and especially Dame Maggie Smith. Though this is hardly material that will win them Academy Awards, they do what all great actors do: perform as if they mean every line. None of them ever play down to the material or behave as if it were beneath them.

Instead, they act as if this is real without being overly dramatic. They know this is a fantasy film, and they know the situation is a bit extravagant, but their performances make it all seem natural. They maintain that delicate balance between seeming to think this is Shakespeare and seeming to think this is junk. Harryhausen (who was also a producer) and director Desmond Davis were right to cast first-rate talents like Smith, Bloom, Meredith and Phillips, who was so brilliant in another "toga party" (the mini-series I, Claudius) because they all were able to handle their roles with intelligence and wit.

Of course, this can't be said for every performer. Laurence Olivier, one of the greatest actors of all time, doesn't appear to be having a good time because he can't quite commit to being campy or being serious. While Smith plays it straight and is never hammy, Olivier is a bit hammy, especially when he talks to Perseus via the reflection in the shield. We can be generous in remembering that this was one of his final films (unfortunately what many people remember him for, and not for such films as Hamlet, That Hamilton Woman, The Entertainer, or Richard III).

The two leads were remarkably bland. Hamlin is very dreamy throughout, and I don't think he changed his expression once throughout the film. Bowker, though beautiful, seems to have taken Hamlin's lead and is also a bit blank through the film. Oddly, Bubo the Owl at times seemed to give a deeper performance.

However, let's not kid ourselves. The true star of Clash of the Titans is Ray Harryhausen and his special effects. They might not be on the same level as something like from The Matrix or The Lord of the Rings but they never set out to be. Some of the smaller visual effects, such as the vulture who takes the spirit of Andromeda to Calibos' court, are beautifully rendered.

Some, such as the Kraken itself and especially Medusa and her lair, are still amazing visually even with all the advances made since. This sequence is the Grand Showcase to Harryhausen's genius: it's appropriately frightening, with the lair bathed in red light, Medusa slithering throughout, her tail rattling danger. The Kraken itself isn't overused, appearing only in the beginning and end of the film, but it's appearance is still extremely impressive in its look.

Credit also has to go to the Make-Up department (Colin Arthur with masks, and make-up artists Basil Newall and Connie Reeve)--the face of Calibos is still amazing, and there were moments when the mixing of the stop-motion with the film are almost seamless.

In fact, that's the whole spirit of Clash of the Titans: a film where fantasy and reality mix. You know this from Laurence Rosenthal's score: a light, adventurous one that signals the fantasy elements of the film. We know this from the closing credits, where the "Mythologicals" are billed as "playing themselves". None of this was meant to be taken seriously.

Instead, it was made to appeal to the innocence of our minds, to that fantasy element that resides within us to accept things that are not real just for the sake of a good time. This is probably why I do not hate Bubo with the passion that others do. He's a cute little owl, and he was meant to be a cute little owl. He wasn't made to advance the plot or to provide resolution: he was made to appeal to children and the children we were.

Therefore, I have no shame in admitting that I Love Bubo.

By no means is Clash of the Titans perfect. At least twice (when we first reach Olympus and when Perseus arrives at Joppa) you had dialogue which was nothing more than plot exposition. Sometimes, also, the mixing of the visual effects with the footage didn't mesh perfectly. However, these are minor points that can be forgiven, given that we were still twenty years from CGI.

Overall, Clash of the Titans has a sweetness and innocence to it, which it all it was going for. The effects may appear dated to those bred on CGI, but they certainly go further in entertaining people than some of those films. This film is full of life and fun and action and adventure and joy. When it comes to this film, it's certain we'll remember these titans.