Doctor Who Story 209: Victory of the Daleks Story 209: VICTORY OF THE DALEKS

It was in March of 2010 when I had the enormous pleasure and privilege of travelling to London, and while there, I visited the Churchill Museum and War Cabinet Rooms. Truth be told, while I did have it in my itinerary, I got there only by going the wrong direction. I had intended to go to the Globe Theater but ended up at the Tower of London, and after that I got on the Northern Line if memory serves correct to go to a Doctor Who shop/museum near Upton Park, but it went the opposite direction from the shop but in the right direction to the Museum.

Believe me, it was my version of Sophie's Choice: I love Churchill, but Doctor Who...eventually the fact that A.) time was running short before having to get dressed for a West End show, and B.) Upton Park IS pretty far removed from the heart of London, and C.) I was quite tired from going from Buckingham Palace to 221 B Baker Street (I love Sherlock Holmes) to The Tower and then try to squeeze in Upton Park was all just too much. Perhaps I'm trying to justify my failure to pay proper homage to The Doctor, but God-willing, I Shall Return. I just need better directions...Believe me, that is my one great regret from my trip.

That being the case, I'm surprised that it's only now that Sir Winston Churchill appears in Doctor Who. He is one of the most iconic Britons in history, and though he made some horrific blunders (Galipolli, his stance on Indian self-rule) he, more than anyone save Their Majesties George VI and Queen Elizabeth, did more to ensure that the British spirit would not fall under the Dark Night of Nazism. His leadership during the War, and especially the courage of all Britons, did make it "their finest hour".  Now, in Victory of the Daleks, Sir Winnie finally makes his mark.

We pick up where we left off in The Beast Below, with Prime Minister Churchill (Ian McNeice) calling on The Doctor to come and see him about something serious, with the shadow of a Dalek entering the picture (side note: that would be a great title: The Shadow of The Daleks). As it stands, The Doctor arrives in the War Cabinet Rooms, and he and Churchill (who have met before) go to the roof so that The Doctor can see the newest invention of Professor Edwin Bracewell (Bill Paterson), a Secret Weapon that Churchill is convinced will win the war quickly. The Doctor sees it in action, and he discovers to his horror the secret weapon is a Dalek.

There are a few Daleks around the War Cabinet Rooms, offering tea to people. The Doctor desperately tries to convince Churchill that they are not new inventions but his oldest enemies, all to no avail. He then goes to Bracewell to find out how he came up with this new machine. Every time a Dalek comes into view the Doctor freaks out and gets tense, until it becomes too much for him and he attacks one to convince everyone about its true nature. Once he tells them, "I'm the Doctor and you're a Dalek", the once-docile Dalek reports back to the mother ship, sending the "testimony". This is all they need for them to revert to their true nature, and in a shocking moment we discover that Bracewell is not human--he's an android created by the Daleks! 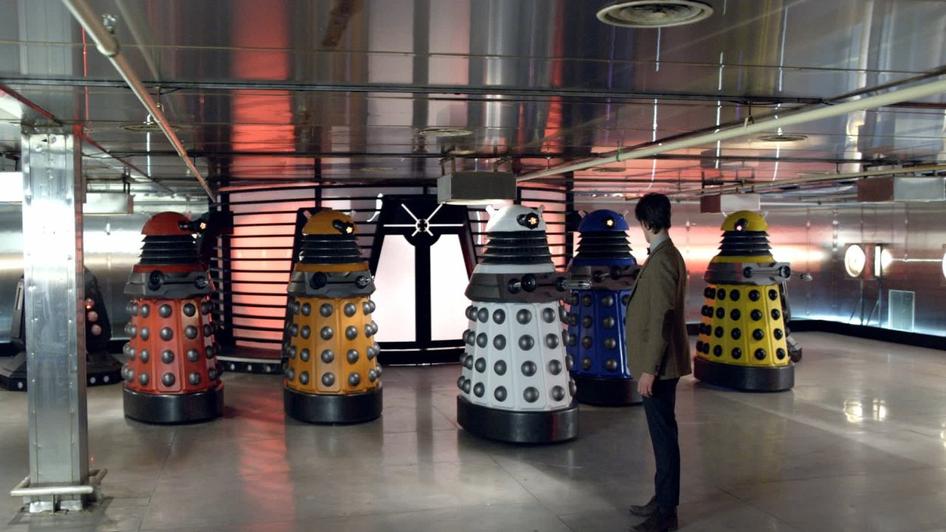 The Doctor goes to the Dalek ship and threatens to destroy the TARDIS and them with him. The Daleks have come back for a Progenitor Device, that will allow them to create a new and purer Dalek. They also will see the Earth destroyed by controlling the generators in London, turning all the lights on to allow the Luftwaffe easier targets to, shall we say, Exterminate the British. Back on Earth, Amy (Karen Gillan) (curious that in this review this is the first time I've mentioned her) and the Prime Minister go to Bracewell and convince him, since he is Dalek technology, to create something that will allow them to fight back against the Skaro mutants. Yes, he can: an RAF that can fly into space.

However, not all is going well. The Doctor can destroy the Daleks, but if he does they will turn Bracewell into a bomb (a Dalek version of a suicide bomber, if you will). If he doesn't, they will be allowed to escape. Even though The Doctor chooses to try to save humans, the duplicitous Daleks (now with the Aryan version in many colors) decide to still set Bracewell off. Things look hopeless until Amy gets Bracewell to think on love, and that disarms him.

The Daleks still manage to escape (their victory) and while The Doctor is a bit upset they got away, he realizes he did a good job. Churchill tries to persuade him to stay and help him win the war, but The Doctor declines, telling him they don't need The Doctor. They've got Winston Spenser Churchill. Bracewell believes they've come to deactivate him, but neither The Doctor or Amy have the hearts (three between them) to do so. With that, they leave...and there's a crack in the wall of the War Cabinet Rooms. 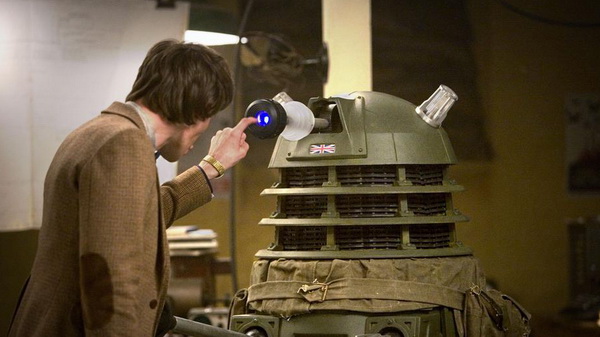 Now I'm just going to flat-out say it: I HATE THE CRACK IN THE WALL BIT. I've endured it again and again and once more, and now the foreshadowing is to me getting out of control. Will we end every story with the crack? I also had a big issue with certain things in Victory of the Daleks, starting with the Daleks themselves.

When I saw the redesigned Daleks, I wasn't bothered by the fact that they came in a rainbow series (though I wonder if this will lead to something the Daleks have never had: individuality, which would break their sinister uniformity). I will say I like the new Eye Socket--that was the best part of the redesign: all the sharp points instead of the camera lens look they carried throughout.

However, when they turned around and I saw a side view of them, I gasped! THEY WERE FAT! I could say without a sense of hesitation that they looked overweight. I wasn't sure whether to laugh or suggest Weight Watchers. I am not a fan of just how big they are--it's as if they decided they were just too bootylicious for us.

I suppose, or at least hope, it was the intention of writer Mark Gatiss to remind us of previous stories. When the Dalek tells The Doctor, "I Am Your Soldier" and "Would you care for some tea?", it was reminiscent of the lost Patrick Troughton story The Power of The Daleks, when a Dalek keeps repeating "I Am Your Servant" over the Doctor's frantic protests that the Daleks were dangerous--even with just the clip, still a terrifying moment. (Side note: here we have the same situation--a bow tie-wearing Doctor is trying to warn the humans that, far from being docile, the Daleks are murderous).

When the Doctor declares that this will be "the final end" of The Daleks, he had made the same declaration in another lost Troughton story (The Evil of The Daleks). It is all too much to believe these were coincidences--it had to be deliberate. Whether it's a good or bad thing I can't decide.

I also couldn't help thinking that Bracewell was too reminiscent of the Replicants from the brilliant Blade Runner: an android that thought it was human, complete with memories. I also couldn't help thinking of the equally brilliant Dr. Strangelove when I saw him with a black glove to replace the hand the Daleks had blown off. I was half expecting him to raise it in a salute to Der Fuhrer. Finally, on the morning after, when the British raise the Union Jack, it was again reminiscent, this time of when the Americans raised the flag on Iwo Jima.

This isn't to say that director Andrew Gunn didn't keep a strong and steady pace. The thing moved quickly, and when the Daleks reveal themselves and Bracewell's true nature it is truly shocking.

Though I wasn't convinced that McNeice made the best Churchill (to my mind, that would be Albert Finney in The Gathering Storm), there were moments when he was quite good and effective as Sir Winston. Patinson's Bracewell did a wonderful job showing himself to be always human even when we and he knew he was not.

Smith continues to grow and make The Doctor his own. It's been three stories and I believe he has proven that he was the right actor for the part; he has a firm hold on the character and has stepped solidly out of Tennant's shadow. My one complaint was that Gillan wasn't a big part of the story. She got a bit lost in all this, but still managed to have her moment. (

Side note: I found it curious that when Amy and Churchill confront Bracewell, the Prime Minister gives him a George W. Bush-style ultimatum: "What you are sir, is either on our side or theirs". Perhaps we have already moved on from A.) the Bush-bashing of Series One and B.) shifted into a more dispassionate and less vitriolic and paranoid view of his Presidency).

If it weren't for the more outlandish elements (RAF In Space! Daleks In Color! Daleks With Booty! See The Crack--AGAIN! ) and some elements that I wish they'd explored a bit more (the parallels between the Daleks and the Nazis), Victory of The Daleks could have had a brilliant masterpiece in the Doctor Who canon. We still have a good story, so that's not too bad. The Doctor in the new series has met brilliant British subjects: Charles Dickens, William Shakespeare, Agatha Christie, Her Majesty Queen Victoria, and now it was time he met one of the Greatest Britons (and Men) of All Time, Sir Winston Churchill.

I confess to having a special place in my heart for him: he is one of my heroes--I forced myself not to cry while watching footage of his State Funeral in the museum. Victory of the Daleks was in retrospect saved from being really bad only because of the performances, and I still debate whether I rank it too high.

I have also included a photo I took of the REAL War Cabinet Rooms while in London. The British are rightfully proud of their finest hour. We, your American brethren, Salute You. 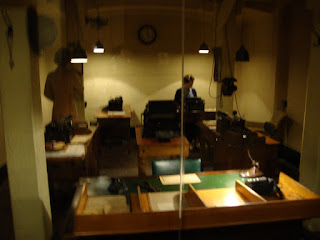 Next Story: THE TIME OF ANGELS
Posted by Rick at 9:37 AM