Ease On Down The Road. Remembering Dennis Hopper 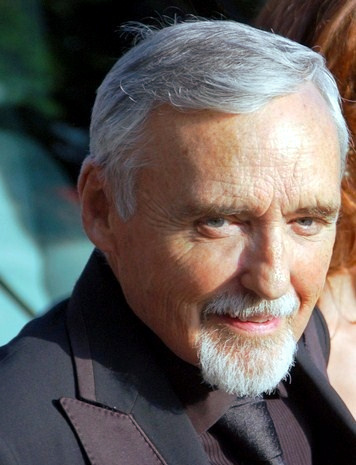 
If one looks at the trajectory of Dennis Hopper's career, it's only now that we realize what an extensive body of work he left behind at his death. His first film was in 1955, and his last will be released posthumously. That is over half a century of work, and even considering how self-destructive he was at the height of his substance abuse problems, he still had an incredible cinematic legacy that can now be appreciated in retrospect.

Looking back at his first film, it might have been oddly symbolic of how his career would go. Rebel Without A Cause was an auspicious debut for anyactor, let alone to be surrounded by the likes of James Dean, Natalie Wood, and Sal Mineo. As it stood, while Nicholas Ray so disliked Hopper that he removed all of his character's lines, Hopper actually survived far longer than the stars.

How quickly he shifted from Goon in Rebel to Giant's Jordan "Jordy" Benedict III, the gentle son of Rock Hudson's Bick Benedict who defies his father by A.) becoming a doctor instead of a rancher and B.) marrying a Mexican girl. Was he being groomed to be a gentle young man on the screen? If he was, Hopper again defied expectations. (Side note: curious how both Dean and Mineo also appeared in Giant--small world, this Hollywood).

Then came 1969, and the film that would mark Dennis Hopper forever as the counterculture icon and spiritual grandfather of independent film: Easy Rider. Hopper set off the modern notion of 'independent film' with this low-budget tale of two bikers taking to the road on a journey of discovery. Things relevant in 1969 (drugs, free love) were openly treated in the film, and the notion that one could make a successful film (artistically/financially) outside the studio system became an inspiration for directors as varied as Quentin Tarantino, Steven Soderbergh, and Darren Aronofsky. Easy Rider spoke to that generation and its effects (good and bad) continue today.

Moving on, he kept acting, though his second directorial effort after Easy Rider was disastrous. The Last Movie wasn't, but it brought Hopper crashing down to Earth in a hard way. He was already heavily into drugs to be fully capable of being a competent director or actor, and while he continued to work he seemed to be more and more like the Photojournalist in Apocalypse Now: bordering on deranged. Lost in a haze of his own making, taking up drugs, alcohol, and wives, Hopper squandered a lot. Eventually, he managed to pull himself together and have an artistic renaissance.

In this second act of Hopper's career, two films stand out. The first is Blue Velvet. His Frank Booth is still an intense and frightening role of a man truly given over to a heart of darkness. One of the truly evil villains in film history, he made oxygen masks frightening, and after watching, few will ever hear the phrase, "F*^% me, Mommy", without shivering.

As if to show us what range he had, the same year we have Hoosiers, where he plays Shooter, the town drunk desperate for redemption in the eyes of the town and his own son by channeling his love and knowledge of basketball to help the Hickory High team. This was his only acting Oscar nomination (though not his only overall nomination, having earned a writing nod for Easy Rider), but both these roles show his incredible range: a psychopath in one film, a flawed but loving father in another.

He still kept working in films as varied as the brilliant Speed and the questionable (though oddly adored) Super Mario Brothers, and it seemed he had settled into playing villains both believable (see Speed) and outlandish (see Super Mario Brothers). To the end Hopper showed in his characters that he was still maybe just a little bit crazy, but that he was still a good actor.

This is evident even in the last film I saw him in: a cameo An American Carol, where he plays a gun-toting judge delighting in shooting ACLU lawyers (who appear as zombies). There is a certain irony in that the symbol of Sixties counterculture evolved into a stalwart conservative who supported Republicans, certainly an outrageous thing in Hollywood. In retrospect, it's oddly fitting that he would switch political views--it is the perfect act of rebellion in Liberal Hollywood to be staunchly pro-George W. Bush.  The movie may not have been good (and there were quite a few clunkers in Hopper's catalog), but he rarely failed to make it interesting.

There is one thing that should be mentioned when discussing Dennis Hopper, one that I think he would appreciate. In the course of his life he became a respected painter/photographer and a strong patron of the arts in Los Angeles. He was a passionate advocate for modern/post-modern art, and he put his money where his mouth was by amassing a large art collection and creating his own work for exhibition.

There certainly was more to Hopper than crazy.

In the end, Dennis Hopper is a case of lost opportunities: he could have reached more if not for his private demons. However, what he did reach were brilliant performances in some of his films of the 1950s, 60s, 70s, 80s, and 90s.

In time, his stock may rise, and perhaps we will be able to see Dennis Hopper as more than just someone who survived his own chaos, but for what he was: a Good Actor.