I have a pet theory about Orlando Bloom: he is incapable of playing parts set in the Twentieth Century. I think of the films I've seen him in and realize that none of them are set at or near the time of his birth (1977). I look back on his filmography and see that I'm mostly right: The Lord of the Rings, the Pirates of the Caribbean films, Troy, Kingdom of Heaven. Each of those films is either pure fantasy or in the historic epic genre.

The only film that I've seen him in that had a contemporary setting/time frame is Black Hawk Down, but it should be pointed out that he had a small part in the film. I always thought it was partially symbolic that his character in that film is the one that fell out of the helicopter. To me, it summed up his career perfectly: put him in a testosterone-filled action film set in the present, and he falls.

In order to test my theory, I had to watch Elizabethtown. This, to my mind, is the only major studio release film where A.) Bloom is the lead, and B.) is set in the world of today. Here, the burden is on him to carry a film both in terms of story and audience appeal. Even if he was an actor on the level of an O'Toole or DeNiro, nothing could have saved this picture from being a meandering mess.

Drew Baylor (Bloom) has bailed on his family for years, giving himself to his career as a shoe designer (yes, a shoe designer). As the film begins, we see that his latest creation is being recalled (though I confess I never got exactly why his shoe was such a spectacular failure). His boss Phil (Alec Baldwin in what is basically a cameo), fires him for costing the company, in his words, "close to a billion dollars", and the story of this debacle will be printed in a magazine within a week's time. Just before Drew attempts to kill himself (by attaching a knife to an exercise machine and having it plunge into his heart...no, I'm not making any of this up) he gets a call from his sister informing him of their father's death.

With his mother (Susan Sarandon) a little out of it, it's decided he'll fly from Oregon and go collect his body in Elizabethtown, Kentucky. On board the nearly empty flight (filmed so cinematically), he meets Claire (Kirsten Dunst) the very chipper, a bit flighty (no pun intended) stewardess who gives him directions to find the town. Once in town, he meets his father's side of the family, and being the South he encounters a host of colorful and eccentric characters, headed up by the doyenne of down-home Southern cheeriness (and Southern Crazy): Miss Paula Deen (as Aunt Dora).

Here, among all the hicks and weirdos that make up the town of Elizabethtown, he finds himself in a hotel that is hosting the wedding of Chuck & Cindy, who live out the creed of "party all the time". As it happens, Drew isn't too far from Claire, and they have a very, very, VERY long cell phone conversation (side note: all throughout the clips that make up the conversation entre Drew et Claire, I kept wondering how their cell phones kept going all night and into the morning without dying on them once).

Drew, determined to follow his mother's (and his own) wishes for a cremation over the objections of everyone in Elizabethtown for a burial, has the burden of both regretting that decision and a blossoming romance with...guess who. Of course, he can't stop the town (I'm sure it wasn't the ENTIRE town, but it felt like it was) from hosting a memorial for Mitch, which Drew's mother and sister do attend (even if the whole town, apparently, hates her for taking Mitch away from his roots to that distant and mysterious kingdom of "California"). This memorial contains among other things tap-dancing, Lynyrd Skynyrd's Freebird (which appears to be de rigeur at all Southern funerals), Claire, and a giant papier-mâché bird in flames. No, the movie STILL isn't over, because Drew has to take a road trip with an urn. Writer/director Cameron Crowe in Elizabethtown appears to be mining similar territory here that he did with Jerry Maguire (man in career crisis discovers love as well as the true worth of things), but the difference is in that in the latter, he showed characters we cared about and was able to draw strong performances from good actors, while in the former, he seems to show either contempt or disinterest in the characters and manage to make even good actors bad. I almost wonder if the California native has a negative view of Southerners as these simple-minded idiots who can't get it through their heads that Mitch did not live in CALIFORNIA but in OREGON.

How the townsfolk is portrayed is a minor problem, but emblematic of just how wrong the whole thing went. When Drew gets to his Uncle's house, he meets all the extended family. One man comes up to him for no apparent reason and gives him the tired old line about how everyone says they "look alike" (which, obviously, they don't). This person then tells him, "It's just like looking in a mirror".

Now, we can take this two ways: either Elizabethtown is a comedy and you shouldn't take anything in it seriously (and frankly, one should take Paula Deen with much more than a tub of butter), or it's suppose to be a drama about a man discovering success can be many things. It cannot have it both ways, but this one moment shows how uneven and chaotic the project overall is. I should point out I don't remember this "look-alike" appearing on screen again, but then I was too distracted by the "comedy" of the screaming child of Drew's hick cousin to pay much attention.

Throughout the entire run of the film I never once got the sense that this was set in a real world. Instead, Elizabethtown constantly reminded me that this was a movie because nothing in it bordered on the realistic. Let's start with Drew's career: a shoe designer. I'm sure there are shoe designers, but by picking such a rare career the audience will have a hard time identifying with his predicament. All the shots, all the performances, all the situations, all were very cinematic--they just weren't very realistic or believable. If Drew really wanted to kill himself, wouldn't there have been a less theatrical manner than by having a machine stab him?

The performances don't help. You have nearly every cliché about Southerners imaginable save the banjo player. I know that every Southern memorial service I've attended has to end with Freebird (after Dixie, the unofficial anthem of the Confederacy). That could be tolerated (up to a point), but once that damn papier-mâché bird is accidentally set on fire, we're suppose to believe that the people will stay there and do nothing but cheer on the guitar solo even as they see and know the bird is on fire.

I also question the logic of any person (let alone a kid) following the shoe world so intensely that he asks Drew when his new shoes come out (serves me right for buying my shoes at Payless).

Dunst's Claire is closer to a stalker or at least someone who is unimaginably cheery and I'd say divorced from reality. She is suppose to have a boyfriend of her own, but we never see or hear from him, and it makes one wonder whether he exists at all. Sarandon doesn't seem happy to be in the film judging from her performance. She speaks as though she was told to speak, with no idea of how a widow who has suddenly lost her husband and is fighting his relatives for control of his remains (which leads to a Point of Logic: doesn't she as his closest living relative have final say, so why does she have to tolerate anything her in-laws have to say about all this). 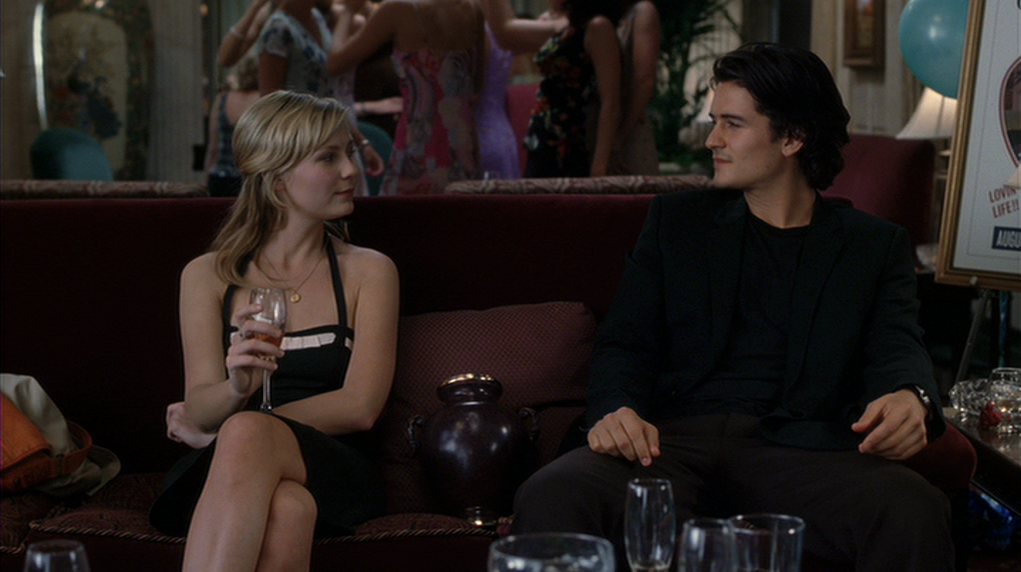 Let's go to the central question: can Orlando Bloom act in a role that is set in present time? Here's the answer: no, if Elizabethtown is the sole proof he has. Here, he seems dreamy, forever staring out, not engaged in anything going on around him. I suppose Crowe did not help: he seemed too interested in making A FILM, not tell a story. Every shot called attention to itself. Every bit of dialogue sounds like it was dialogue. Every character called to be "whimsical".

In fact, that's a good way of looking at the aspirations of Elizabethtown. When Drew sees his father's corpse for the first time he walks around it, trying to figure what word describes his father's face. "The word is...whimsical," Drew says in the voice-over. That seems to be the perfect word for what the film is going for...and fails at.

I note that there is one speech that Claire gives Drew after their one-night stand. He tells her about how he lost his company "close to a billion dollars", and how this will be in the trades soon. "You failed," she tells him. "You failed, you failed, you failed, you failed," she repeats in a sing-song fashion. "You're an artist, man. Your job is to break through barriers. Not accept blame and bow and say, 'Thank you, I'm a loser, I'll go away now'. You want to be great? Then have the courage to fail big and stick around". When I heard that, I kept thinking and rethinking ONE thing: Cameron Crowe wrote that with Cameron Crowe in mind.

I don't know if it's coincidence that the film he made before Elizabethtown is Vanilla Sky (a film which was mercilessly savaged and pilloried, along with himself), but I think that he wrote that speech to comfort himself, to give himself a pat on the back, to justify to himself why and how Vanilla Sky failed with both critics and audiences, to tell himself that the rejection of Vanilla Sky wasn't his fault.

The reason (Vanilla Sky/the shoes) were rejected by the (audience/public) wasn't because they were bad, but because (Crowe/Drew) is an artist whose job is to break through barriers, NOT accept blame and bow and say thank you I'm a loser I'll go away now. (Crowe/Drew) failed big, but they stuck around. Of course, this may be more psychoanalytical on my part, but part of me tells me that Cameron Crowe is too autobiographical a film-maker to make this a mere coincidence.

I've answered my question: Orlando Bloom, for the moment, cannot act in a film that is set post- 1977 (God Help him if he's ever cast as Joe Strummer in a film about The Clash). He doesn't have the gravity to be dramatic or the lightness to be humorous. It looks like he'll have to stay within the confines of fantasy and historic epics, because he just can't go home again. At the very least, he should stay as far from films like Elizabethtown as far as the Crowe flies.