Doctor Who Story 162: The End of the World


There are no real limits on Doctor Who in what stories it can cover. Since the TARDIS (the Doctor's ship which looks like a telephone booth used to call the police) can travel through time as well as space, the stories can take place in the future or the past, on Earth or in the heavens.

The End of The World takes advantage by taking place in a combination of all these: in the far future above the Earth.

Having decided to travel with The Doctor (Christopher Eccleston), ordinary British girl Rose Tyler (Billie Piper) go to a spaceship above the Earth five billion years into the future. The ship is Platform One, where a select group of wealthy aliens will watch the explosion of the Earth caused by the expansion of the Sun. The Doctor tells Rose that all the humans have left the Earth long ago and that the planet has been preserved until now, a curious relic whose time has come.

Among those attending the planet's end is the Lady Cassandra O'Brien (voiced by Zoe Wanamaker), the last "pure" human (one who was not the product of a human-alien mix). Also in attendance are such exotic creatures as The Face of Boe (a large head within a cylindrical case), the Moxx of Balhoon (a small, blueish creature), and living humanoid trees from The Forest of Cheem, headed by Jabe (Jasmine Bannerman).

As the various creatures await to witness the spectacle of the Earth's last hour, small robotic spiders are wreaking havoc about Platform One. They disable the solar filters (killing the Steward of Platform One in the process) and nearly killing Rose as well. They also disable the protective shield around Platform One, which would cause the ship to be swallowed up by the Sun's expansion. This was all a plot by The Lady Cassandra, who was at first merely going to create a hostage situation where she would get money to continue her plastic surgeries and thus stay alive. Seeing as how this won't work, she goes to a backup plan: let everyone die and get money by cashing in on their deaths and making her escape.

The Doctor restores the protective shield just in time (although at the cost of Jabe's life) and brings Lady Cassandra back, where she literally disintegrates. In all this, the Earth has quietly expired without anyone noticing. The Doctor takes Rose back to present-day London; there she realizes that life does go on and learns the truth about The Doctor's past: he is the last of the Time Lords, his world and people having been exterminated at the end of the Time War when the Time Lords lost. Both realize there is no time to lose: they've only got five billion years till the shops close. 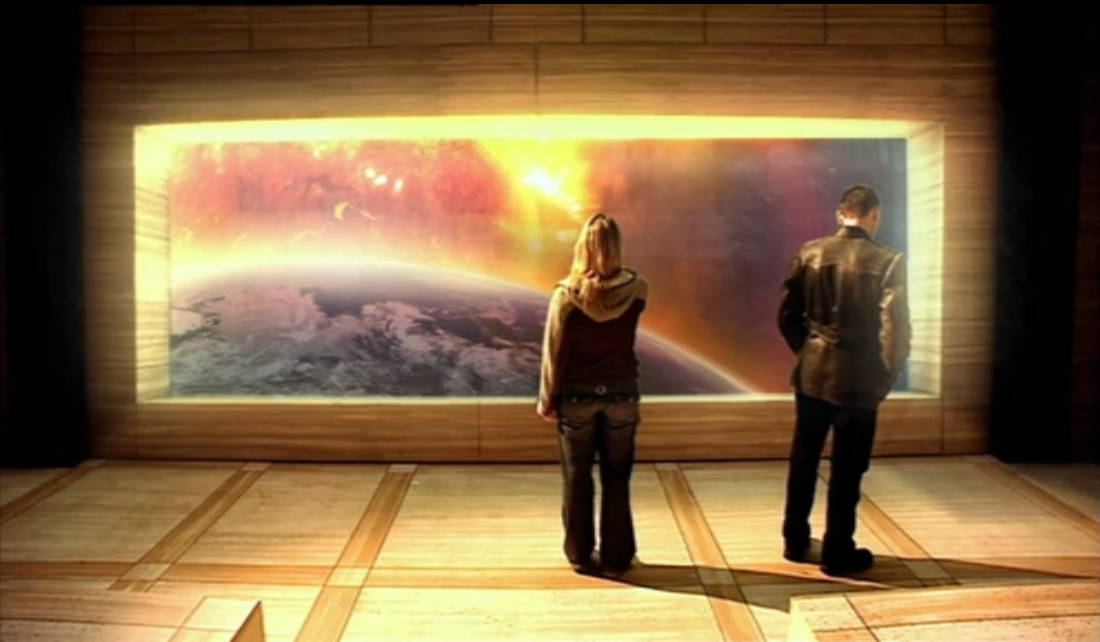 Russell T. Davies's script is a fine mix of action, adventure, intelligence, and even comedy. Both Tyler and Eccleston have short but beautiful monologues about mortality and survival. They express both hope and sorrow about how life both goes on and conversely must end.

The light touches are almost all thanks to Wanamaker's Lady Cassandra, who has a most curious take on history. When she talks about "classical music" coming from a machine called an "iPod", what we see is a jukebox and what we hear is Soft Cell's Tainted Love. The 'traditional Earth ballad' she has played when the Earth is close to destruction is Britney Spears' Toxic, and truth be told the song actually fits. The passengers aboard Platform One are coming close to having toxic poisoning from the Sun's heat, and they are "too high, can't come down".

Like all good science-fiction programs, Davies touches (albeit lightly) on social commentary: how Lady Cassandra looks down on the "mongrels" who've intermixed human with alien is a subtle jab at those horrified by interracial relations (still a hot topic today, more so in America than Britain), and also about the human desire to stay young/live forever. It also reveals more about the Doctor's past (of which viewers have had little chance to know up till now).

The leads are excellent. Eccleston's Doctor manages to maintain the his manic nature from Rose but also adds a deeper, more tragic layer. When Jabe mentions how sorry she was about his people (meaning she knew his history), Eccleston's eyes fill with tears, and for a moment he becomes such a hearts-broken being, but then pulls himself together to do what needs to be done.

Tyler also has her moments: when she tells Lady Cassandra off (referring to her as a 'bitchy trampoline') is both a sign of a strong woman and quite amusing. However, she expresses realization about the reality of the situation she's in when she recognizes that for all practical terms her mother has been dead for billions of years.

Guest star Wanamaker is hilarious as Lady Cassandra. Using nothing but her voice (with special effects production team of The Mill creating her stretched-out skin), Wanamaker makes her funny, evil, and ultimately tragic. Bannerman's Jabe does a hard job well: making us believe a tree can talk (well, technically she's descended from the tropical rainforest, but that's getting a little too detailed). Her performance is thoroughly convincing and an excellent heroic figure.

Most of the credit rests with director Euros Lyn, who keeps things going in a steady pace without losing the audience. He maintains the right balance of terror and laughter when they are needed. Murray Gold's music also adds to the comedy of Lady Cassandra and the tension of the near destruction of Platform One.

The shifts in tone never feel forced or rushed, and considering all this takes place within an hour's time (coincidentally the same amount of time the Earth has before disintegration, making it almost a real-time story), that is an extraordinary achievement. Finally, Davy Jones' make-up was brilliant: the creation of the creatures from the Forest of Cheem alone were remarkable and well done.

The biggest issue I had with the story is that Rose Tyler is not an integral part of The End of The World, certainly not as important as she was in Rose. For most of the episode she was locked within an observation deck, banging on the door and begging the Doctor to let her out. This 'damsel in distress' situation is at odds with the fact that Rose was so Companion-centered. If you have Rose and Jabe swap places, would it have been that much different (aside from the fact that Rose wouldn't have met Jabe's fate)?

In the final analysis, while the fact that she didn't seem to be a big part of the plot hurt the story, overall The End of the World is still a fantastic follow-up to the revived Doctor Who. The story was exciting, the acting excellent, the directing efficient and effective. While it may be The End of the World, I feel fine.

Next Story: The Unquiet Dead
Posted by Rick at 1:23 PM