Doctor Who Story 163: The Unquiet Dead 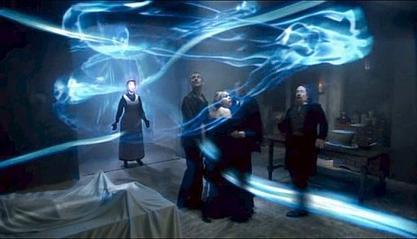 It has been a long, long time since Doctor Who had a historic story. Even in the original series after the now lost Second Doctor story The Highlanders stories that took place in the past were few and far-between (I think Black Orchid may have been the last purely historic story, with no extraterrestrial elements involved). Whenever a Doctor Who story took place in the past, it usually involved a historic figure/time who is involved with extra-terrestrial situations. The Unquiet Dead continues with that vein, but the story and the performances are so well done that those who like historic settings and those who don't will not be disappointed.

At first The Doctor (Christopher Eccleston) tells his Companion Rose Tyler (Billie Piper) that he'll take her to Christmas Eve in 1860 Naples. As is customary for the TARDIS, it's a bit off: it is Christmas, but 1869 Cardiff, Wales. No matter, for Rose is excited to explore a new world (technically an old world). Of course, there is something wicked afoot: the local mortician, Mr. Sneed (Alan David) and his chambermaid Gwyneth (Eve Miles) have been plagued with corpses who rise suddenly and wander off. One such creature (I don't think they qualify as zombies for reasons to be revealed shortly) wanders off to a special Christmas Eve performance she was dying to attend (pun intended).

It is a reading of A Christmas Carol by none other than Mr. Charles Dickens himself (Simon Callow).

As it stands, Dickens is a most unhappy man. He is telling the same story, in the same way, over and over again; he is distant from his family (physically and emotionally) and feels that his career is failing and fading. Still, ever the trooper, he goes on with the show. During his reading, the gaseous creature that has given the corpse formerly known as Mrs. Peace life emerges from her, much to the shock and horror of everyone in the theater.

The Doctor storms his way in and is determined to find out what those creatures are, but Mr. Sneed and Gwyneth are also in the hunt, mostly to stop the bodies from wandering about. They get hold of Mrs. Peace and in the process kidnap Rose, who they believe knows too much. The Doctor races after them, getting Dickens involved by forcing him and his coach to follow that hearse.

Once The Doctor and Dickens rescue Rose, we learn that these bodies have been walking on their own for some time. Gwyneth, who has some sort of clairvoyance powers, is asked to contact these "spirits", much to Dickens' disapproval. They do make contact, and learn these are not ghosts but The Gelth, beings who are slowly dying because they cannot sustain their gaseous state for long periods of time. The Doctor, feeling a sense of need to save them, asks Gwyneth to act as a bridge between the Gelth and Earth so that they can enter...and once they do, all Hell breaks loose. 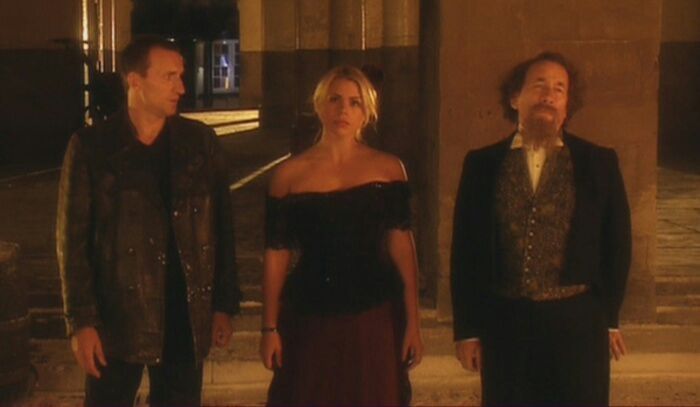 The Unquiet Dead is the first story not written by Russell T. Davies to air. Instead, it's the work of Mark Gattis, and he has captured all the best from the Doctor Who canon: action, danger, science-fiction, historical, and comedy. He creates a story that holds up logically and gives you a truly shocking twist, and it was wise to bring that twist not in the middle but near the end.

Even after a second viewing, I was still taken by surprise. The Gelth are given a reason why they appear and disappear instead of just being there. It even integrates the upcoming repeated theme of "Bad Wolf" into the plot without being too obvious about it.

The performances of everyone are brilliant. Eccleston returns to his more manic reading of The Doctor, especially when he's talking to Dickens for the first time. His rapid delivery brings a light, joyful touch to a very serious, even dark story. The whole conversation between him and Charlie as he calls him is hilarious.

Tyler, unfortunately, had a bit of misstep in that this is the second story in a row where she's been held hostage in a locked room, which was I think a mistake. Given she'd already been locked away in The End of The World, it runs the risk of being repetitive. However, this was a flaw in the script and not of hers or director Euros Lyn. Also, to Gattis' credit, she wasn't locked in the room for as long as was in the previous story.

However, when she objects to potentially putting Gwyneth in danger, it is very touching and beautiful. The secondary performances are also first-rate: David's Sneed isn't a clichéd evil man but one who is just concerned about how walking corpses will affect business. Miles' Gwyneth is by no means a simpleton. In fact, hers is a multi-layered performance, a girl who carries a sweetness and innocence while also dealing with these powers that she cannot understand. One of the major pluses in The Unquiet Dead is that the script never varies from Victorian speech or understandings of the world. The characters of the time explain things from the nineteenth century perspective. That does a great deal to put us in their world, which is brilliant. The best and greatest performance in The Unquiet Dead is that of Simon Callow as Charles Dickens. He was simply born to play the author. He has that thing called a character arc, going from a disillusioned writer at the end of his hopes to a man reinvigorated by his adventure with the Doctor. He captures both the rationality of Dickens as well as the ego of a famous man.

I point again to the scene between Dickens and The Doctor in Dickens' coach. This is a double act, and we see how The Doctor's genuine flattery softens the novelist, though you could also see how Dickens doesn't take kindly to having someone criticize their work. Seeing how his worldview shifted from a total rationalist to someone who can find a logical answer to what appears supernatural is again, brilliant.

Callow gives an amazing and great performance. The final scene, where Dickens asks The Doctor if people still remember his books is both beautiful and tender. What is best about Callow's performance as Charles Dickens (and about the character of Dickens himself) is that he is actually an integral part of the plot. It isn't "oh look, here's Charles Dickens and we're just in his time and he'll just pop in and out to remind us he's here". No, the solution to the crisis is a direct result of Dickens' presence and logic.

It is a wonder to me why the revived Doctor Who will limit itself to one historic piece (as I understand it), especially given that most have very little to do with actual history but a mixture of history and science-fiction (basically an alien story taking place in the past).

I guess I'm one of those that likes historic pieces, so my heart would like to see more of these types either as a purely historic story (The Aztecs) or a mixture (The Unquiet Dead). Overall, this is a brilliant, brilliant story. It was truly, The Best of Times...