Doctor Who Story 006: The Aztecs

The Aztecs is unique for several reasons. It is the earliest surviving historical adventure, a type of story quite popular with the production staff during the first two Doctors but which fell out of favor over the purely science fiction stories. In fact, the last purely historic Doctor Who that I can think of is Black Orchid during the time of the Fifth Doctor. All the history stories of the Ninth, Tenth, and Eleventh Doctors have a science-fiction element, making them ahistorical.

It is also the first story that began independent of the preceding story. In other words, there was no lead-in from the story before it (The Keys of Marinus). It's a curiosity in the early days of Doctor Who that the production was very much in tune with the episodic nature of the series and did not see the potential of having stories not connect directly to one another until later on. It also had the first suggestion of romance for The Doctor (William Hartnell) himself, which a future successor (David Tennant) would exploit to full use (to the point of making the Tenth Doctor a bit of a space slut).

The four episodes of The Aztecs (The Temple of Evil, The Warriors of Death, The Bride of Sacrifice, and The Day of Darkness) are a good history lesson and an exciting adventure story which blend together to create a truly excellent Doctor Who serial.

We land inside a tomb. Barbara (Jacqueline Hill) and Susan (Carole Ann Ford) soon realize they are inside an Aztec death chamber (and are on Earth again) but are captured by warriors accompanied by Autloc, the High Priest of Knowledge (Keith Pyott). He mistakes Barbara for the reincarnation of Yetaxa, the priest the tomb is for, and her handmaiden. Soon, the Doctor and Ian (William Russell) appear and are taken for Yetaxa's servants. Barbara (in the eternally imperialist fashion) decides that she will single-handed stop the Aztec custom of human sacrifices with her new power. This doesn't fit the plans of Tlotoxl (pronounced Teh-TOX-il and played by John Ringham), the High Priest of Sacrifice.

As it turns out, Tlotoxl suspects that Barbara is a false goddess and intends to unmask her. The Doctor wants nothing more to stop Barbara from interfering in the course of human history and to get back to the TARDIS which is inside the tomb. Ian has been put in the army and fights the warrior Ixta (Ian Cullen) for supremacy.

As Barbara continues to play with history (and play the sympathetic Autloc against the villainous Tlotoxl), Susan is compelled to marry against her will and the Doctor inadvertently gets engaged to Cameca (Margot Van Der Burgh), a wise elder among the Aztec people. In the end, Barbara fails to change history, though she has made Autloc turn away from human sacrifice.

The Aztecs is nothing short of brilliant. Every element of the story gels so brilliantly, starting with the performances. It's an interesting thing that writer John Lucarotti did in making Barbara the center of the story. It isn't too far-fetched given that she's a history teacher, but unlike previous stories the tension and suspense isn't dependent on action but on the power of the mind. The crew must always keep one step ahead of the machinations of Tlotoxl and Ixta, constantly trying to put them off from confirming the truth about them.

There is action in the forms of fight sequences (almost always between Ian and Ixta) and they are executed brilliantly (courtesy of the fight arrangers Derek Ware and David Anderson), especially the climatic one before they finally manage to escape. Ian, oddly, doesn't make a major contribution to the overall story of The Aztecs except for this. He's the requisite action hero, and he does it well and certainly no fault of his that he is a bit underused, but credit the directing of John Crockett that the story flows so well one doesn't notice how quickly each episode ends.

Hartnell creates some of the best acting he's done so far in the series, especially with Wright. When he tries in vain to convince her not to interfere in an upcoming human sacrifice, the tension, frustration, and fear he communicates is brilliant. "You can't rewrite history. Not one line!" he tells Barbara, going on to say, "Believe me, I know. I KNOW!" Not only does this hint that he has tried to do that himself, but communicating with his voice the foolishness and futility of his attempts.

He also handles the comedic romance between himself and Cameca with gentleness and sensitivity. You get the sense that he does care about Cameca and regrets having to leave her. It almost makes him human and it's a credit to his acting that none of this is ever played for cheap laughs but with real sentiment. At first, I wondered about Ford's performance since she wasn't in much of the story either, but found that her vulnerability was matched by something I hadn't seen starting from An Unearthly Child: an inner strength. When she balks at the notion of marrying someone chosen for her, she isn't a weak little girl, but a growing and independent-minded woman. 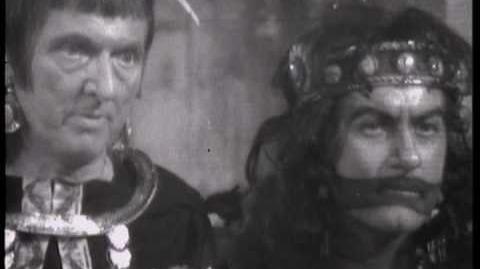 Of all the performances, the greatest credit goes to the guest stars. Ringham's Tlotoxl is a villain through and through. Throughout The Aztecs, he had this Richard III vibe going, right down to the way he walked with one shoulder higher than the other (almost as if he had a hump). At the reprise of Episode 2, he is extremely frightening and intense in his declarations of aiming to destroy Barbara. This is made more frightening by Jill Summers' make-up. The stripe that goes across his face and lips makes it look like Tlotoxl is wearing a death mask, fitting for this man who literally rips the hearts out of others (though of course, this would not be shown on 1960s television).

Pyott's Autloc is a wise man torn by his wish to serve Yetaxa and his doubts as to her veracity, especially as she tells him of future events without being able to be specific. As he struggles we see him to be a good man who is beginning to question everything he knew for certain, and Pyott creates an ultimately heartbreaking character.

This is what elevates The Aztecs from a mere adventure story to a highly intelligent one: the struggle between faith and reason exemplified by the murderous Tlotoxl and the thinker Autloc.

Van der Burgh brings a great deal of sympathy to Cameca, and what first starts as a humorous story of mistaken intentions in romance by the end turns tragic as she loses the man she has fallen in love with. She handles the shift with grace and beauty, and her performance also rises to brilliance. 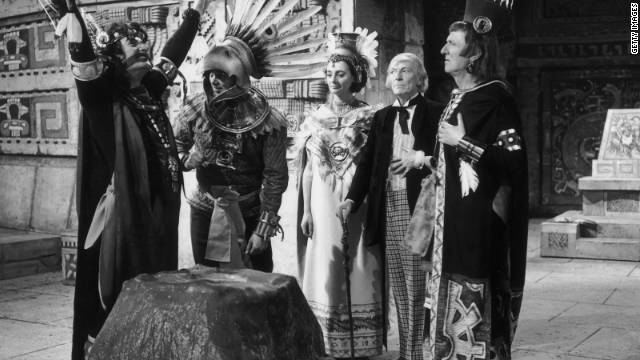 The production elements are also brilliant. Daphne Dare and Tony Pierce's costumes are not only authentic-looking but magically elaborate and lavish, a remarkable feat given the limited budget Doctor Who usually had. Barbara's costume as Yetaxa will remain one of the hallmarks of beauty that few Companions would be able to match (with the possible exception of Romana I & II). The wardrobe for the Aztec warriors as well as the headdresses Ian and Ixta wear in their final confrontation bring one into the pre-Colombian world, which only adds to both the authenticity and enjoyment of the production.

Barry Newbery (who had worked on the previous historic stories An Unearthly Child and Marco Polo) created the best sets he has yet done in the series. They look almost as they had filmed on location in Tenotchtilan itself. Immense credit also has to go to Richard Rodney Bennett's score, which captured the lightness and terror of the varying situations while creating music that appeared to be as close to authentic as this lost civilization will ever likely be.

Every element of The Aztecs came together to create the first true masterpiece of Doctor Who. This has always been one of the things that sets Doctor Who apart from other science-fiction programs: it not only could go through space but also through time, thus it could tell stories that took place in Earth's past without violating its basic premise. Even the inadvertent mistakes (such as when the camera had to be hurriedly moved when it was clear that Barbara's elaborate headdress blocked The Doctor's face or when a weapon accidentally broke when it shouldn't have) only add to the charm of the story. It's a credit to everyone involved (especially producer Verity Lambert) that The Aztecs may be the Citizen Kane of Doctor Who historic stories.

On a side note, the fact that it was the second-shortest story so far (after the two-part Inside the Spaceship) at only four episodes makes it rise. We had just had a seven-part story (Marco Polo) followed by a six-part story (The Keys of Marinus) and both I figure would have been exhausting for most audiences. Eventually four-part stories would be the norm for Doctor Who, so The Aztecs could be the first story since An Unearthly Child to settle to form.

The Aztecs was fast-paced, exciting, with brilliant performances, masterful production values and a great story told exceedingly well. At least now The Aztecs will never disappear from the world, a fate that would rip our hearts out.

Next Story: The Sensorites
Posted by Rick at 3:59 PM