*Author's Note: It's the policy of Rick's Cafe Texan NOT to take into consideration the original when reviewing a remake/reboot/reimagining of a film. Therefore, all efforts will be made to ignore the existence of the 1984 The Karate Kid in this review.

Quick lesson: the correct pronunciation for the particular martial art known as karate is "kaw-raw-teh" and translated from the Japanese it means "empty hand" (kara-te). You see the same when you see karaoke, which should be pronounced "kaw-raw-OKEH" (empty orchestra, kara-oke). This information really is useless when you think of The Karate Kid, because A.) it's not karate, and B.) it's not based on anything Japanese.

Instead, it is about kung-fu, and it is thoroughly Chinese. This begs the question, if it's not about karate but about kung-fu, why not call it as it should be called: The Kung-Fu Kid? Answer is obvious: The Karate Kid is already understood by audiences, and frankly, only practitioners of karate, kung-fu, and nitpickers like myself would bother to note or care about the difference. Alas, for many in the audience...karate, kung-fu, same difference.

Twelve-year-old Dre Parker (Jaden Smith) moves from Detroit to Beijing to accompany his mother (Taraji P. Henson) who has been transferred to a new job there. First day he's there two things happen: Dre meets Mei Ying (Wenwen Han) a pretty Chinese violinist, and Cheng (Zhenwei Wang), a bully with a gang who doesn't take kindly to this foreigner taking a liking to Mei Ying.

Dre is miserable in China: he doesn't speak the language (or ever bother to try and learn it), keeps getting pushed around by Cheng and his crew, has no friends, and just really hates it there. He does try to push back at Cheng & Company but has little success since they all practice kung-fu. In one fight, Dre comes close to apparently almost being killed but then none other than the maintenance man at Dre's apartment, Mr. Han (Jackie Chan) shows up, and we find he is a kung-fu master. Han strikes a bargain with Master Li (Rongguan Yu), the head instructor at the kung-fu academy Cheng & Company go to: Dre will not be bothered while Han trains Dre in the art of kung-fu and in return Dre will fight in the Kung-Fu tournament. Han trains Dre, we discover a secret from Mr. Han's past, and then we get the epic duel between Dre and Cheng.

In a film like The Karate Kid, it's vital to be able to root and cheer and identify with the lead. That can't be done. Jaden Smith WILL BE A STAR...whether we want him to be one or not.

Agreed: he was wonderful in The Pursuit of Happyness, but does anyone think the same of his performance in the remake of The Day The Earth Stood Still? (Maybe he just shouldn't be in remakes). Throughout the film he came off as frankly a bit of a jerk: dropping his jacket on the floor and always whining whenever his mother asked him to put it up, talking back to her, disinterested in learning even the most rudimentary Mandarin and expecting everyone else to speak English, and even being almost bored when visiting The Forbidden City.

Side note: if he's not impressed with The Forbidden City even in the slightest, then he's beyond hope.

Dre in short came off as the quintessential Ugly American, making it hard for me to like him, let alone cheer him on. All that could be tolerated, but Smith at this point seems incapable of expressing any emotion beyond whining and slight boredom. At the moment, young Smith has not learned the difference between emoting and acting. It's more than just saying the lines written by Christopher Murphey. When he is suppose to be angry, he gestures with his hands but doesn't communicate anger so much as irritation. I'm going to digress on the age-appropriateness of The Karate Kid. As stated, Dre is twelve years old. I wonder whether it's right to give a twelve-year-old a big romance with another twelve-year-old. At a festival (which, unfortunately given the accents I first heard "festival" as "basketball") Dre and Mei finally share a kiss. I see nothing wrong in tweens expressing attraction via lips touching, but as filmed by Harald Zwart it was extremely lush and romantic for a scene involving children...it even had literal sparks going off a la To Catch A Thief.

Even more disconcerting are the number of shots where young Smith is filmed shirtless while training. All the accompanying "woos" by girls was irritating in and of itself, but what seemed to be an effort to make young Smith some sort of preteen sex symbol was downright creepy.

I have already remarked at making a-then seventeen year old boy the object of lust, but doing likewise to a twelve-year-old was simply flat-out weird. Maybe twelve-year-olds express their sexual desires more readily today than when I was twelve, but the focus on young Smith's physical training was off-putting to me. All this might work for a seventeen year old, but for a twelve year old, not so much.

Leaving that aside for the moment, let's go back to other performances. Henson didn't add much to the film since she wasn't in the film that much. Basically, she served as a reason to get Dre to China, and the same goes for the little boy who got Dre to go to the park. His purpose was to get the ball rolling on the main plot, and once that happens we don't see him again until the big tournament.

Side note: he was there so briefly I don't think I even learned the character's name.

It's an odd thing to be wondering where a minor character went in a film, but it's a sign of the problems of The Karate Kid that characters can be disposed so easily and quickly once they have served their raison d'ete. In fact, when one thinks about it, the story didn't even have to move Sherry and Dre Parker to China...couldn't he have found one bully in Detroit? I heard there were some bullies in West Philadelphia, just saying. 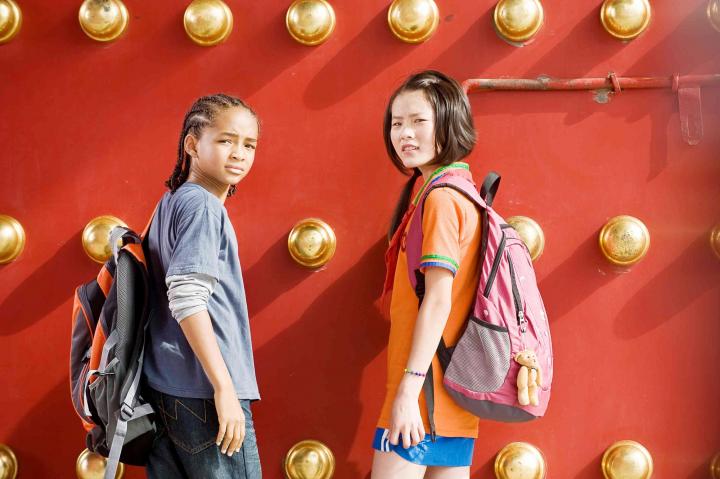 There really was no reason to set the film in China, save for the fact that kung-fu is more prevalent there than in the States, and that Beijing is located there, as is The Great Wall (where Dre has more training, something I'm sure goes on there every day), and the Chinese market is becoming very lucrative.

Chan, as the mysterious Mr. Han, does a much better job at being the wise mentor to Dre, and the scene where his secret is revealed (all great men have torturous secrets in films) shows he can be a strong dramatic actor.

Besides Chan, there really isn't much to recommend The Karate Kid apart from some beautiful cinematography of China by Roger Pratt. For all the lush imagery of the Chinese countryside (better cinematography of The Forbidden City can be found in The Last Emperor courtesy of Vittorio Storaro) the camera work and editing of Joel Negron is among the ugliest in recent memory. There seemed to be a deliberate effort to copy the style of a Bourne film in the way the fight scenes were filmed, so much so that I thought the film might have been retitled The Bourne Elementary School.

The fight scenes were confusing and badly shot: whatever beauty there is in kung-fu was lost with the camera going this way and that, left, right, center, all over the place. Even when there were no fights, the camera had a habit of moving all around: Dre would be seen on a couch, then the camera would move to the door where Sherry walks in, then move to the jacket on the floor, then back to Dre on the couch, then again to the jacket, then to Sherry and move with Sherry picking up the jacket off the floor--one was in danger of getting whiplash.

For all the money put in the film (courtesy of a co-production with the China Film Company, which I figure is the state-run film company, and co-producers Will and Jada Smith, who just happen to be Jaden's father and mother), this is really a cheap way of making a film.

One last point: James Horner's score seemed to me to echo music from other composers. When Dre first encounters the kung-fu academy, I thought it was reminiscent of Debussy, while when he goes to a temple for more training I heard elements of Gladiator, which is curious since in that film Hans Zimmer's score had echoes of Gustav Holst's Mars, The Bringer of War.

As stated, I make it a rule not to discuss the original version of a film when discussing a remake/reboot/reimagined version, but The Karate Kid was almost goading me to do so. At the climatic match between Cheng and Dre, Master Li tells him, "I want you to break his leg. No mercy".

Forgive me, but I couldn't avoid hearing, "Sweep the leg" when I heard that.

The Karate Kid is clearly a star vehicle for the scion of a major star. It has no other purpose. Young Smith even contributes to the soundtrack: the last song has him performing with Sign of the End of Western Civilization Justin Bieber.

Young Smith may yet be an actual actor, but at the moment he still has to grow, get stronger directors and material to do so. I am interested if they decide to make a sequel, if only to hear these kids do their version of that old 1970s hit by Carl Douglas that goes, "Everybody was karate fighting..."