Doctor Who Story 005: The Keys of Marinus STORY 005: THE KEYS OF MARINUS

Press Any Keys To Continue...

We've bounced a bit on Doctor Who, from Earth's past (An Unearthly Child and Marco Polo) to other worlds (The Daleks). Now, we're back on another world in The Keys of Marinus, but with a slight difference: instead of the four travelers getting involved by accident, in this story, they are asked then forced into events. Terry Nation (in his second go-round after The Daleks) was wise in having the travelers have a reason to be in the story other than just landing in the wrong place at the wrong time.

He also used a new technique: each episode in this six-parter (The Sea of Death, The Velvet Web, The Screaming Jungle, The Snows of Terror, Sentence of Death, and The Keys of Marinus) was a mini-adventure within the overall story itself instead of one episode flowing into the next one. Individually, the episodes show inventiveness and intelligence. As a whole, they don't mesh as well as they could have.

To prevent this, Arbitan has scattered four of the five keys that control The Consciousness across Marinus, and now he first asks, then forces the crew (by holding the TARDIS hostage) to find the keys and bring them back so that he can use The Consciousness to fight the Voord. With that, they go to various places within Marinus: the city of Morphoton (The Velvet Web), a mysterious jungle (The Screaming Jungle), an mountainous ice world (The Snows of Terror), and another city, Millennius (Sentence of Death), before returning to the temple only to discover Arbitan is dead and Yartek is about to seize all the keys (The Keys of Marinus). However, Yarket's plan backfires on him (quite literally), and the travelers are at last free to continue their journey. 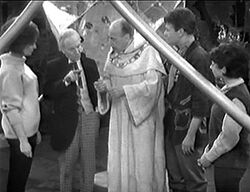 The difficulty with The Keys of Marinus is that each episode is quite good independently, but when all put together it doesn't hold together. For example, in Episode 2 most of the story is spent between the world The Doctor (William Hartnell), his granddaughter Susan (Carole Ann Ford), and Ian Chesterton (William Russell) see and the world Barbara Wright (Jacqueline Hill) discovers. Granted, Nation's script for this episode is brilliant: the conflict between reality and illusion is played so well by all the actors (including Katherine Schofield as Arbitan's daughter Sabitha and Robin Phillips as Altos, a previous searcher for the keys) and visualized excellently by John Gorrie. However (and it's a big however) is that in every episode of The Keys of Marinus the actual search for the key was rather superfluous.

Take same Episode 2: the key just happens to be around Sabitha's neck, and to be frank, I hadn't realized it until near the end of the episode. In Episode 3, the bit about the old man whispering a secret before dying is rather cliched, and again, most of the story is concentrated on rescuing Barbara as opposed to actually searching for the key. Same with Episode 4: finding the key isn't all that hard, once they escaped mountain man/prospector-type  Vasor (Edmund Warwick), but again, most of the episode was about rescuing, in this case Altos, Sabetha, and Susan.

Side note: one couldn't help but notice that Altos was wearing something akin to a Speedo and a poncho, so I kept wondering how he didn't freeze to death in The Snows of Terror when he's wearing such a skimpy outfit up in the snow-capped mountains, but I digress.

Episode 5 dealt mostly with a murder mystery and trial...with the search for the key being almost secondary. This is the overall flaw to The Keys of Marinus: the supposed central point to the overall story is not the driving force of the story.

One can't throw away the baby with the bathwater. As I've stated, individually the episodes are excellent. The best is Episode 2 (The Velvet Web). The twist near the middle is a genuine shocker and pulls the episode to a higher level. The other episodes, thought not as good as the others, also kept the momentum going by introducing new threats in the forms of hostile vegetation, Ice Soldiers and Vasor, the threat of execution to Ian, and Yartek possibly winning.

Perhaps it was my imagination, but I also read certain things into The Keys of Marinus that Nation may or may not have intended. For example, the lone sorcerer-king and his daughter (Arbitan and Sabitha) to my mind had an undercurrent of The Tempest where they mirrored Prospero and Miranda to a degree. I even imagine an early environmental message in Episode 3 (The Screaming Jungle). It isn't too much of a stretch to see how the natural world will strike back against the encroachment of humans.

The trial of Ian in Episodes 5 & 6( Sentence of Death and The Keys of Marinus, curiously the only parts of the overall story that overlap) did have its cliched moments (the co-conspirator killed before revealing all) but there were good performances from the woman Kala (Fiona Walker) and the determined prosecutor Tarron (Henley Thomas).

In fact, the performances of everyone were above par. Coulouris, who was only in the first episode (at his request I understand), is memorable as Arbitan. To his credit, he might have thought The Keys of Marinus a come-down from his performance in Citizen Kane, but he played it absolutely straight. Phillips shifts from being sinister in Episode 2 to being the romantic lead by Episode 6. This shift in perspective is equalled by Walker's Kala. Schofield as Sabitha goes through a smaller change, from mind-controlled victim to innocent girl, but she also is excellent in her performance.

The leads themselves are a slightly different story. Hartnell disappears for Episodes 3 and 4 (he was on holiday at the time), but to his credit he's not as crotchety as before. His performance while defending Ian is first-rate. He does still have his odd turn of phrases, which are still delightful. In Episode 1 he chastises Ian for having Susan wear Ian's boots, telling him, "And if you'd had your shoes on, my boy, you could have lent her hers". I confess that line did throw me...and still does.

We also have another line in Episode 5 where he discusses court strategy with Susan and Barbara. He says, "I can't improve at this very moment...I can't prove at this very moment..." On the sound of it, it sounds quite funny. However, upon further research it appears that this was a deliverate choice by writer Nation. I can't think why this was done, since it makes things confusing for the viewer.

Hill also continues to give an excellent interpretation to Barbara. There are even hints of feminist stirrings. She complains to Susan that she's getting tired of Ian suggesting they are the ones in constant need of rescuing. The suggestion of attempted rape by Vasor in Episode 4 is remarkably daring for its time (as opposed to when Amy Pond attempts to rape The 11th Doctor in The Time of Angels Parts 1 & 2), and Hill manages that delicate material with strength and intelligence. However, she also stumbles over her lines to humorous effect. In Episode 2 she tries to convince Sabitha that she is being controlled by outside forces. "I believe your under some deep form of deep hypnosis", she says. I figure she was trying to say that she was under A form of deep hypnosis. Still, it was an excellent move to make Barbara see that the world of Morphoton wasn't all it appeared. Russell continues to be a good action hero, though he didn't have much to do in Episode 5 and most of Episode 6 except pace. Ford gets a split decision: her monologue in Episode 3 is excellent, but her constantly being frightened at nearly everything was getting a bit annoying and repetitive.

There were some things that worked and some things that didn't. Norman Kay's score was magnificent--it set the mood for every part of Marinus, whether the slightly sinister/dangerous world of the Temple of Arbitan or the slightly decadent world in The Velvet Web or the impending doom in Sentence of Death. Daphne Dare's costumes were brilliant, ranging from the neo-Roman world of Episode 2 to the tribunal's garbs in Episodes 5 & 6...though I still am puzzled by Altos' wardrobe being so revealing. The biggest mention goes to Raymond Cusick's sets. He was faced with an unenviable task: create separate worlds for each episode with a limited budget, but he created amazing sets. The Temple of Arbitan is incredible in itself, but to have created all those disparate worlds shows his creative ingenuity.

Having said all that, with all the good things that are in and part of it, why am I not enthusiastic about The Keys of Marinus? It has to do with the fact that I can't ignore: while each episode by itself was excellent, they didn't tie the overall story together. If each episode was intended to serve the overarching story, then The Keys of Marinus didn't fulfill its task. Each of the six stories were suppose to feed ONE story, but they didn't, at least not as well as they could have. The search for the four keys didn't motivate the travellers as much as escaping from wherever they were. I have to judge the OVERALL story, not individual components.

It's a curious thing that several years later, The Fourth Doctor (Tom Baker) would relive this experience in a way when The White Guardian had him search through time and space for the six parts of The Key to Time. Curiously, that search took far longer (five stories at four episodes each, and the sixth at six episodes), so perhaps there was more time to develop the dangers and individual worlds more than in six stories overall. However, in the case of The Keys of Marinus, while there were good parts in all six episodes, and while the overall story isn't bad, it's my view that these keys just didn't fit.

Next Story: The Aztecs